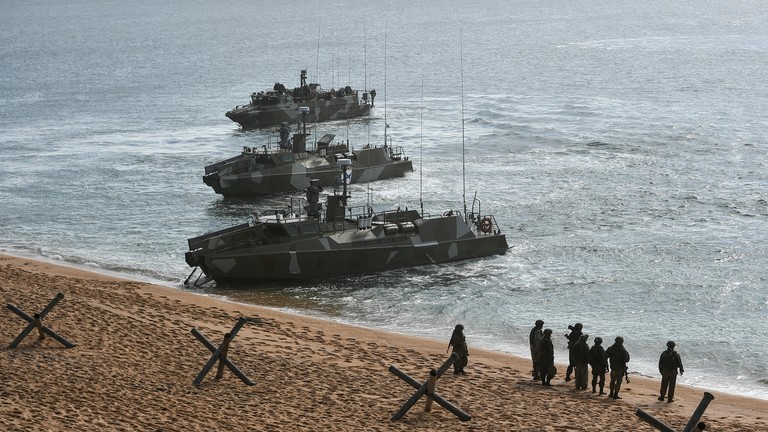 In an interview with the NATO and weapons industry-funded lobby group The Atlantic Council on Wednesday, former British foreign intelligence service chief Sir John Sawers was asked whether he thought Western governments’ publication of declassified material was helpful for countering Russia, or if it might have been planted to diminish the credibility of the officials who ended up releasing it.

“I think, in general, what you point to is the fact that [Russian President Vladimir] Putin’s Russia has been rather skillful at shaping narratives, at using their arguments and at times their propaganda in order to shape opinion, partly in their own country, but even more so in the West,” Sawers replied.

“I think that what the US administration in particular has been quite adept at in this crisis has been, first of all, corralling the West, coordinating and orchestrating a common Western response,” he continued. “And second of all, not allowing Putin to have it all his own way on the airwaves.”

The former MI6 chief then went on to say that he thinks the Western intelligence briefings “are not gems from deeply sensitive agent reporting. What has been released, the idea that Putin might want to dislodge [Ukrainian President Volodymyr] Zelensky and replace him with a puppet government, or that he’s going to contrive a pretext for Russian intervention in the east of Ukraine, these are based on a growing understanding, an analysis of Putin, rather than deep, secret intelligence reports.

“And I think wrapping them up as intelligence and adding a few juicy names to the reporting just gives some good stories for the media, and helps push back against the narrative,” he continued. “It’s a skillful use of information and analysis to turn the tables on Putin and his own ability to dominate the airwaves.”

Western leaders have been voicing fears of a possible Russian attack on Ukraine for months, and in recent days they have claimed that an invasion could take place at any moment, with some media outlets naming February 16 as the date. These reports have been fueled partly by selective American and British declassifications of intelligence alleging various Russian plans to stage coups in Ukraine or to stake “false flag” operations as a pretext for aggression.

However, Moscow has consistently denied that it ever planned to invade, and some have questioned both the accuracy of the Western reports and the wisdom of the strategy to periodically leak accusations with no evidence to prove them.

Earlier this month, when US State Department spokesperson Ned Price was asked for proof following an allegation that Russia had planned to stage a propaganda video as a pretext for invading Ukraine, he replied, “If you doubt the credibility of the US government, of the British government, of other governments, and want to find solace in the information the Russians are putting out, that is for you to do.”