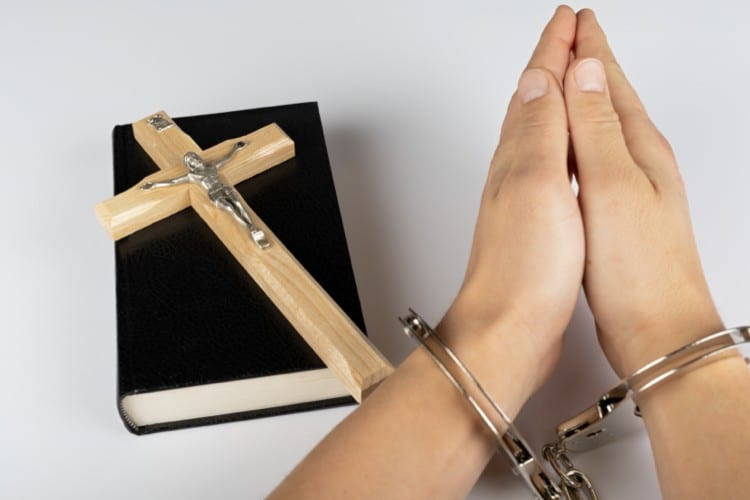 If “you can successfully portray rejection of homosexual behavior as analogous to rejection based solely on skin color — if ‘homophobia’=‘racism,’” I wrote in 2014, then authentic Christianity=the KKK.

So-called “hate speech laws” already existed back then, of course, and Christians had already been punished for expressing their beliefs in certain Western countries. But now, eight years later, we’re seeing an intensification of what is essentially the outlawing of Christianity. In fact, in what may be a first in any nation, the prosecution in a hate-speech trial recently quoted passages from the Bible to make its case against Christian defendants.

The only difference now is that this is done not just in homosexuality’s name, but also in the name of “transgenderism” (Made-up Sexual Status, or MUSS). Andrea Widburg reports on the story:

Leftism truly hates the Bible. Their creed is inconsistent with the Bible’s commitment to the worth of the individual, its focus on justice, and its insistence on moral standards. In the old days, leftists imprisoned clerics and destroyed houses of worship. Now, though, they have a new technique for Christianity, which they still view as their greatest enemy: they are trying to silence the Bible through LGBTQ-based hate speech charges, and they are insisting that Jesus was transgender and that the Church must embrace the LGBTQ spectrum. Both these things have really taken off in Europe and Canada.

The first line of attack against the Bible is that it’s hate speech. Most Christians aren’t calling for witches to be burned, but devout Christians are wont to say homosexual behavior is sinful and that transgenderism runs counter to the belief that God created man and woman, not “it” or 122 variants of “it.” (Those who claim it-ness are making gods of themselves, a very dangerous thing to do.)

In England, street corner preachers have often been arrested for saying homosexuality is sinful. (The most recent example is described here.) However, the two biggest recent attacks on Christianity have taken place in Canada and Finland.

As issue in Canada is its bill C-4, which took effect January 7 and bans so-called “conversion therapy,” whose goal is to free people from unwanted homosexual or MUSS feelings. As to the latter, the law actually states that it’s prohibited to offer/engage in “a practice, treatment or service designed to … change a person’s gender expression so that it conforms to the sex assigned to the person at birth.”

The problem here is, among other things, “that the [bill’s] overly broad definition could lead to conversations between parents and children, or between pastors and congregants being criminalized,” writes The Gospel Coalition (TGC). What, the group wonders, is specifically meant “by the terms ‘practice, treatments and service’”?

In reality, there is no specificity because it “is not uncommon for Parliament to pass vaguely worded legislation with the expectation that the specific application and limitation of the law will be determined by the courts,” points out TGC.

Quite true. Enacting vaguely worded laws allows cowardly, power-addicted legislators to effect politically correct social engineering while, via constituency-specific marketing, being able to sell it to the widest possible swath of voters. The lack of specificity minimizes citizen wrath at election time, of course. Yet these lawmakers are abdicating their responsibility. For they well know they’re outsourcing their duty to make law to the courts — which today are perfectly willing to “fill in the blanks” (provide the specificity) and legislate from the bench — and will, having been corrupted morally, rule almost invariably in a politically correct fashion.

In the video below, which provided the inspiration for my piece’s title, commentator Matt Walsh explains the Canadian craziness.

Yet things are just as crazy in Finland, where two Christian leaders “stood trial in Helsinki on Jan. 24 for publicly stating the Bible’s teachings on sex and marriage,” writes the Federalist. The site continues:

Longtime Member of Parliament Paivi Rasanen and Lutheran Bishop Juhana Pohjola defended in court their decision to write and publish, respectively, a pamphlet explaining Christian teachings about sex and marriage.

In the trial’s opening arguments, which will resume on Feb. 14, Finnish prosecutors described quotations from the Bible as “hate speech.” Finland’s top prosecutor’s office essentially put the Bible on trial, an unprecedented move for a secular court, said Paul Coleman, a human rights lawyer with Alliance Defending Freedom International who is assisting in the Finns’ legal defense and was present during Monday’s trial.

… Never before has a Finnish court had to decide whether quoting the Bible is a crime.

“It’s noteworthy that Christianity is Finland’s official religion,” Widburg writes about this, pointing out the irony, and that “one of Helsinki’s biggest tourist attractions is Temppeliauko Church, a literally sunken church.”

And all of the West is sinking — under the weight of sexual devolutionary lies (and other things). Just consider the preamble to Canada’s C-4 bill, which in part reads:

Whereas conversion therapy causes harm to the persons who are subjected to it;

Never mind that authority figures (e.g., teachers) feel free, and do sometimes attempt, to convert children to a MUSS identity (a lawsuit motivated by this meddling has recently been filed). This inverted “morality” is now enshrined in law. The above preamble reflects this reality, and something else as well: a culture lost due to conservative neglect.