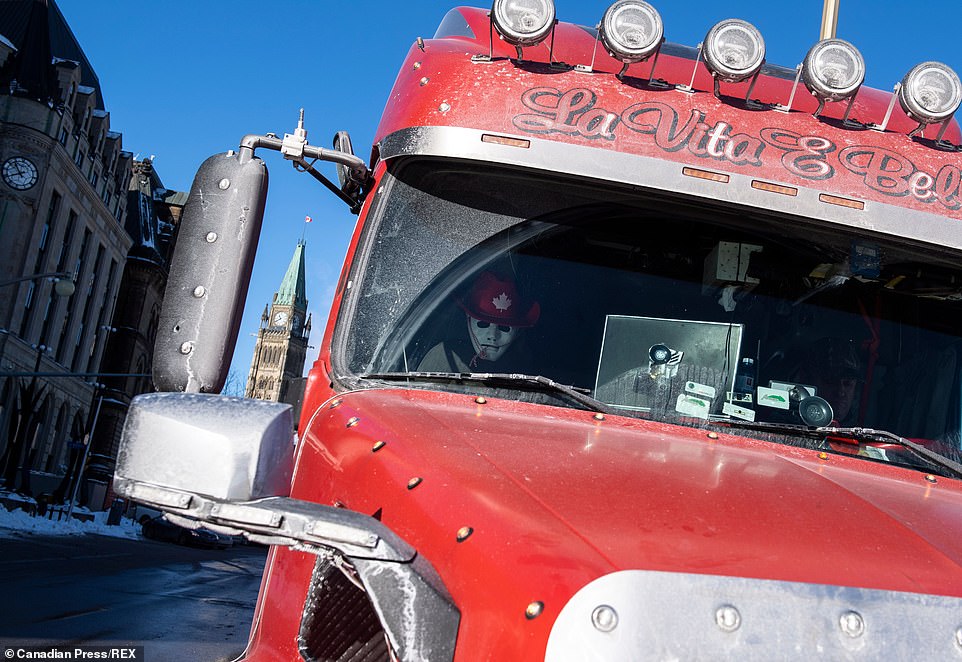 A ‘Freedom Convoy’ of trucks joined by thousands of demonstrators brought Ottawa to a virtual standstill for a second day on Sunday as they protested Canada‘s vaccine mandates, as other sympathetic truckers blocked a border highway into the United States.

The truckers say there is no ‘end date’ in sight and plan to stay in the capital ‘for as long as it takes’ and until the Canadian government flips and withdraws its policy on vaccine mandates.

The chaos clogged the capital’s downtown near parliament throughout the weekend and brought criticism from officials, including Ottawa’s mayor who said residents were ‘prisoners in their own home.’

But the demonstrators say they intend to stay and that their aim is to ‘create chaos’ and a ‘logistics nightmare’ for the Justin Trudeau’s government.

‘Right now, yeah, it’s really cold, but we hang in there, the days are going to get longer and we take this block party and put it into overdrive,’ BJ Dichter, one of the organizers of the Freedom Convoy, said at a press conference. ‘We’re in this one for the long haul. We don’t have a time limit.’ 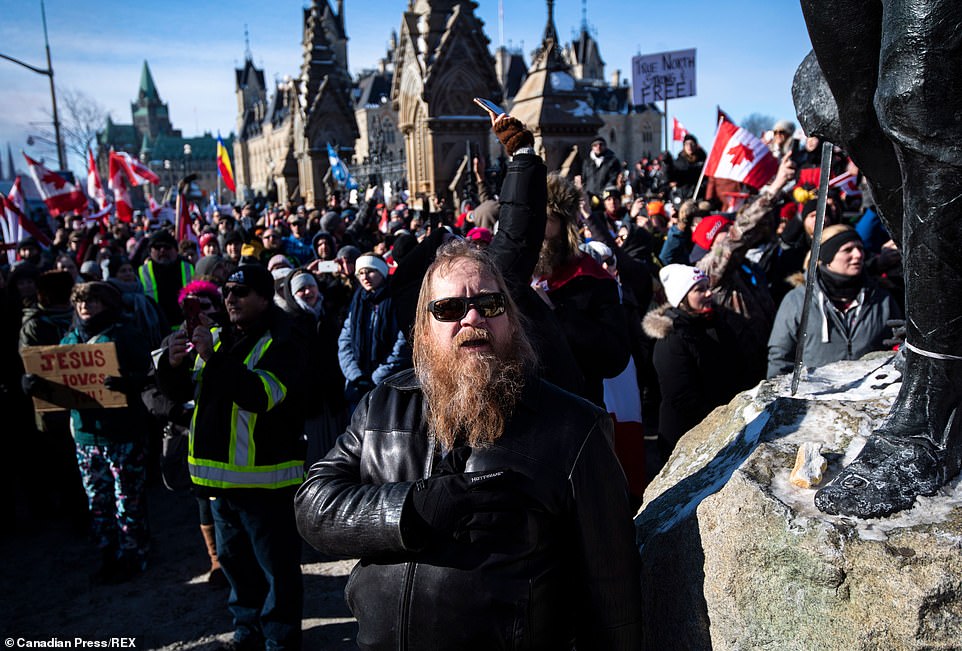 A person holds their hand to their heart during a singing of O Canada during a rally against COVID-19 restrictions on Parliament Hill, which began as a cross-country convoy protesting a federal vaccine mandate for truckers 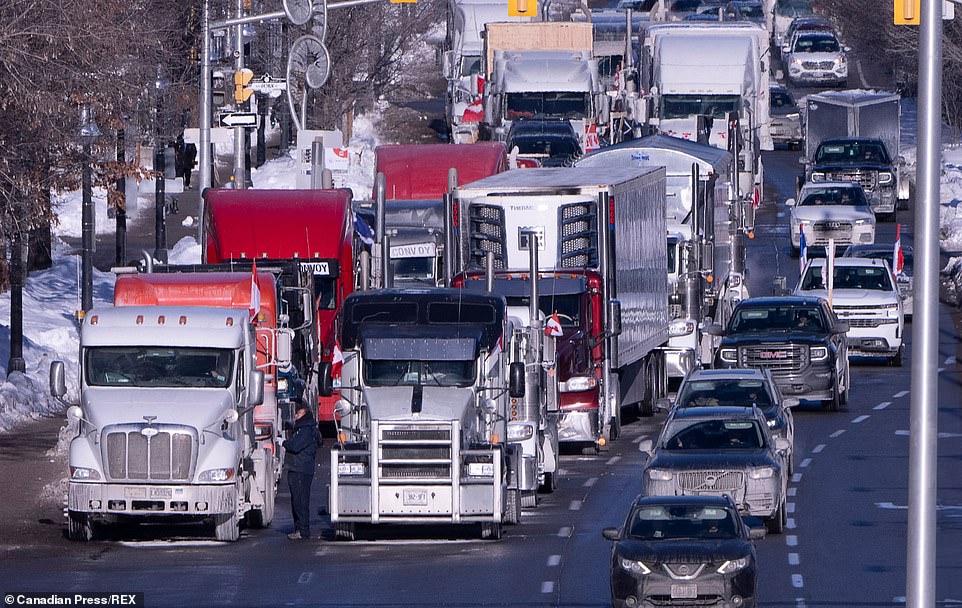 Vehicles from the protest convoy are parked blocking lanes on a road, onS unday in Ottawa 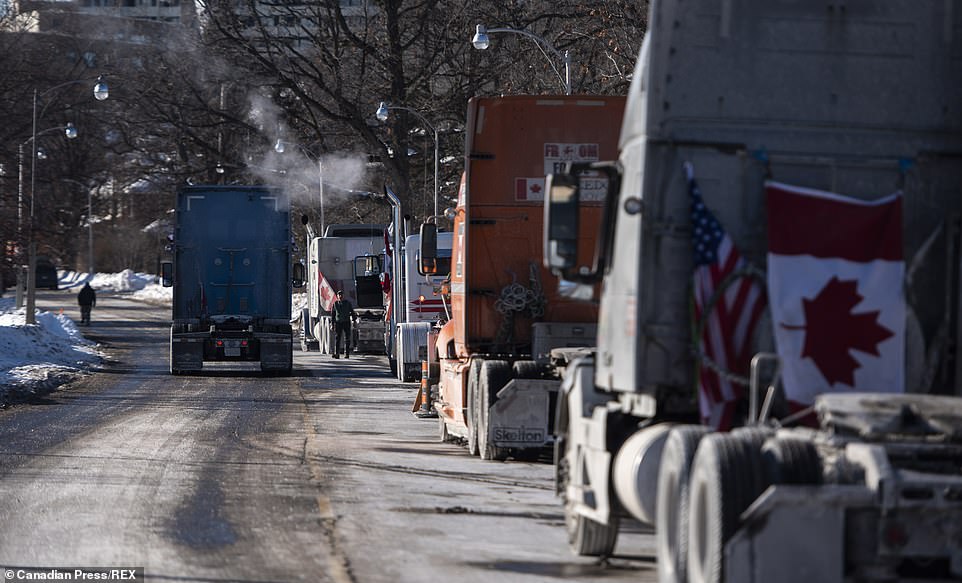 Trucks participating in a rally against COVID-19 restrictions, which began as a cross-country convoy protesting a federal vaccine mandate for truckers, are parked along Queen Elizabeth Drive in Ottawa 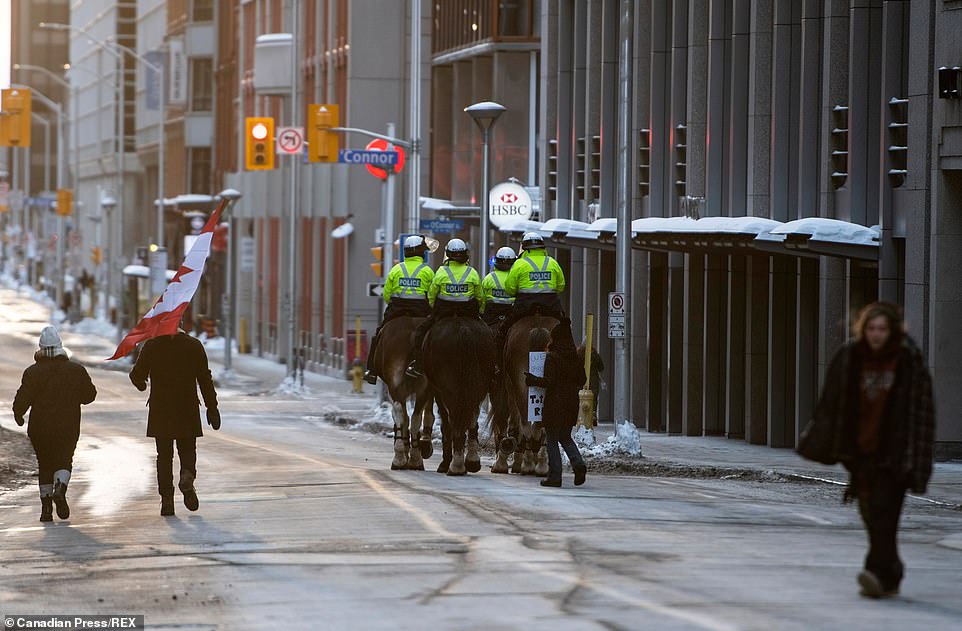 A police mounted unit makes their way along Queen Street, closed to traffic, as a rally against COVID-19 restrictions continues 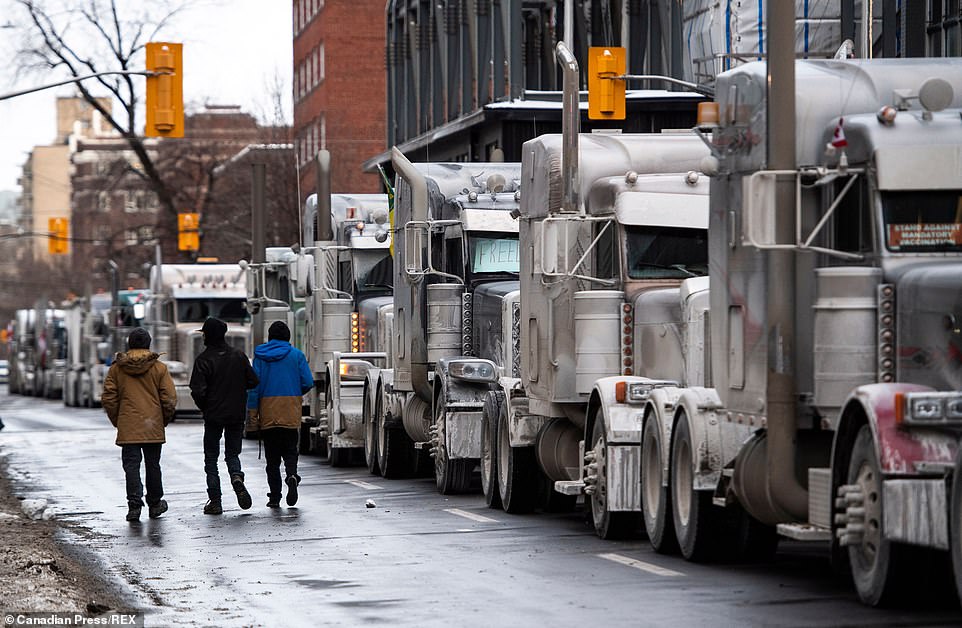 Trucks are parked on Metcalfe Street. Residents of the national capital are again being told to avoid traveling downtown as a convoy of trucks and cars snarl traffic

The boisterous protests are now threatening to interrupt business on Monday, with authorities stating that City Hall will remain closed, traffic will be disrupted and some other services stalled.

Canada’s House of Commons plans to be at work on Monday.

‘The House will reconvene at 11am tomorrow, as planned, in accordance with the Standing Orders,’ the Speaker’s office confirmed on Sunday night.

No comment has been made on what security arrangements will be in place with thousands of protesters still on scene.

‘This afternoon, a large presence of police continues throughout the downtown core and the movement of protestors and trucks continues to be managed,’ the Ottawa police said in a statement.

‘These high-risk situations were de-escalated and resolved with no arrests,’ the authorities said, adding that ‘police resources are fully stretched’ in dealing with the obstruction, which appeared to involve hundreds of trucks.