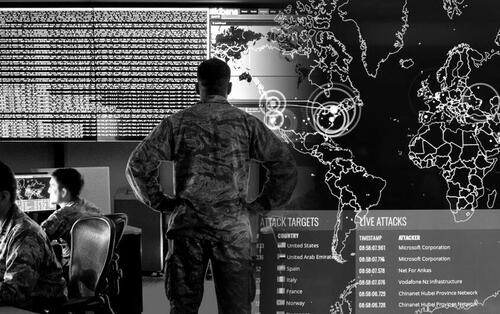 Citing four anonymous insiders, NBC News reports that President Biden has been presented with a ‘menu’ of options for the US to carry out ‘massive cyberattacks’ aimed at crippling Russia’s ability to sustain its military operations in Ukraine.

“You could do everything from slow the trains down to have them fall off the tracks,” said one person briefed on the matter.

Two U.S. intelligence officials, one Western intelligence official and another person briefed on the matter say no final decisions have been made, but they say U.S. intelligence and military cyber warriors are proposing the use of American cyber weapons on a scale never before contemplated. Among the options: Disrupting internet connectivity across Russia, shutting off electric power, and tampering with railroad switches to hamper Russia’s ability to re-supply its forces, three of the sources said.

Whether that’s actually possible remains to be seen – as Russia has made headlines in the past for their ability to disconnect themselves from the worldwide internet.

According to the sources, the options presented include preemptive responses whether or not Russia launches its own cyber attacks on the US to retaliate against sanctions.

The goal wouldn’t be to destroy – rather disrupt Russia’s systems, and therefore ‘fall short of an act of war.’ The idea would be to harm ‘networks,’ not people.

The anonymous sources noted that officials are “debating the legal authorities under which the attacks would take place,” and whether they would be covert action or clandestine military activity.

Last June, Biden and the leaders of 30 countries that now make up NATO agreed that “the impact of significant malicious cumulative cyber activities might, in certain circumstances, be considered as amounting to an armed attack,” with Biden calling NATO’s Article 5 – or its mutual self-defense clause, “a sacred obligation” that is “rock solid and unshakable.”

In short, cyberattacks on NATO members by Russia (or other nations) could be considered an act of war, so might Russia assume the same about attacks on their systems?