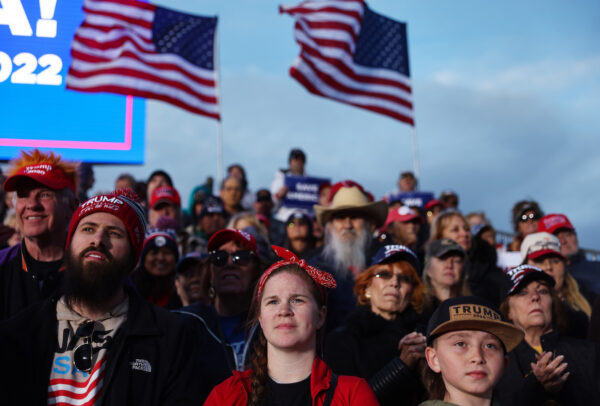 Former President Donald Trump painted a positive future for Republicans late Saturday at his first rally of 2022, held in Arizona.

“A great red wave is going to begin here in Arizona and is going to sweep across this country and it’s going to wash hundreds and thousands of Democrat socialists out of office with an unstoppable surge of Republican patriots, and they’re going to be doing it, you’re going to be heading to the polls,” Trump said at the Canyon Moon Ranch festival grounds, in Florence, a Republican stronghold about 70 miles southeast of Phoenix.

“This is maybe the most important election we’ve ever had. I do believe that 2024 will be even more important … In 2024, we are going to take back the White House!” he added.

Thousands of supporters gathered at Trump’s rally, his second in Arizona since he left office.

The former president described the crowd as a “sea of people” that stretched “as far as the eyes can see,” and urged media members present to turn their cameras around. Trump used the crowd size to question the results of the 2020 election.

“I ran twice, and we won twice, and we did better the second time … This crowd is a massive symbol of what took place because the people are hungry for the truth, they want their country back,” the former president asserted.

“A person that comes here and has crowds that go further than any eye can see … and has cars that stretch out for 25 miles—that’s not somebody that lost an election,” he later said. “And now because of it, our country is being destroyed.”

Trump deplored the current state of the nation but expressed hope the situation will change, outlining agendas that include to eliminate COVID-19 mandates, investigate the events of Jan. 6, 2021, and combat illegal immigration.

During his speech, Trump endorsed Kari Lake for Arizona governor while calling incumbent Gov. Doug Ducey, a Republican, a “terrible representative” of the state.

Lake, a former journalist, promised to eliminate mandates if she becomes governor. She also promised she would help to ensure election integrity and address illegal immigration, including to finish building the border wall.

The former president lobbied heavy criticism against the Biden administration’s mandates, which he said are “absolutely decimating our economy.”

Trump urged Americans to “tell Joe Biden the Americans’ health choices are none of his business, we can make our own choices.”

“With these decisions they’re making, they’re wrecking and devastating people’s lives; firing Americans from their jobs, forcing innocent children to grow up in masks, closing their schools—destroying education, crushing their development, demolishing their futures—[and] locking people in their homes,” Trump said.

“This is the moment the Americans must take their lives and their future back,” he added. “We have to do it. We have to be strong. It’s time for the radical Democrats to leave our families alone, leave our elderly alone, leave our children alone with their strong immune system.”