Jan. 8 — Beginning on January 10, there will be three meetings which will include Russian and American representatives, in which the possibility exists that the tensions which have increased over Ukraine during the second half of 2021 will be addressed, resulting in a de-escalation.  These meetings follow direct discussion in two video conferences in December between Presidents Putin and Biden, in which the most urgent issue addressed was the danger of war between Russia and Ukraine.

U.S. intelligence claims to have evidence, based on Russian troop movements along the border, that they are preparing to invade Ukraine, as early as the end of January. President Putin dismissed this claim, raising instead his concerns over the possibility that Ukraine would be granted membership in NATO, a prospect he denounced as an unacceptable provocation, which would be the crossing of a “red line.” While Biden insists that an offer of NATO membership is not imminent, the Russians have pointed to ongoing NATO-U.S. military exercises in Ukraine, and the provision of increasingly sophisticated weapons to Ukraine, as a threat to Russia’s security.

Putin has submitted drafts of two legally-binding treaties — one for the U.S., one for NATO — which would prevent further eastward expansion of NATO, would prohibit the delivery of new weapon systems to the Ukrainian military, and would pressure Ukraine to abide by the Minsk agreement which it signed to allow for a peaceful resolution of the conflict in the Donbas. He has been raising the need for security guarantees repeatedly, as the anti-Russian rhetoric and NATO military deployments have escalated. For example, he said in a speech delivered to the Valdai Discussion Club in Sochi on October 21, that Ukraine does not even have to be given formal NATO membership to pose a strategic threat to Russia.

“Formal membership in NATO ultimately may not happen, but the military development of the territory is already underway. And this really poses a threat to the Russian Federation….Tomorrow, rockets could appear near Kharkov, what are we going to do about it? It’s not us placing our missiles there, it’s them shoving theirs under our nose.”

He continued, referring to the February 1990 promise made to Soviet President Gorbachev by U.S. officials, on behalf of NATO, that no eastward expansion of NATO would occur after the reunification of Germany:

Putin elaborated his view of the threat to Russian security in a December 21 report to the Defense Ministry Board:

“What they (the United States) are doing on the territory of Ukraine now — or trying to do and going to do — this is not thousands of kilometers away from our national border. This is at the doorstep of our home. They must understand that we simply have nowhere to retreat further….Do they think we don’t see these threats? Or do they think that we are so weak-willed to simply look blankly at the threats posed to Russia?”

Putin stressed that placing weapons with nuclear devices in Ukraine puts them within 5 minutes of Moscow! He continued,

“As I have already noted, in the event of the continuation of the obviously aggressive line of our Western colleagues, we will take adequate retaliatory military-technical measures, and react toughly to unfriendly steps. And, I want to emphasize, we have every right to do so, we have every right to take actions designed to ensure the security and sovereignty of Russia….We are extremely concerned about the deployment of elements of the U.S. global missile defense system near Russia.”

In case the urgency and intensity of Putin’s message were missed by the Trans-Atlantic powers, Foreign Minister Sergei Lavrov reiterated the non-negotiable nature of Putin’s demand for the adoption of these treaties. Russia is preparing, he said, “to firmly and effectively pursue the agenda of defending our interests and refusing to make concessions that would be unilateral….” 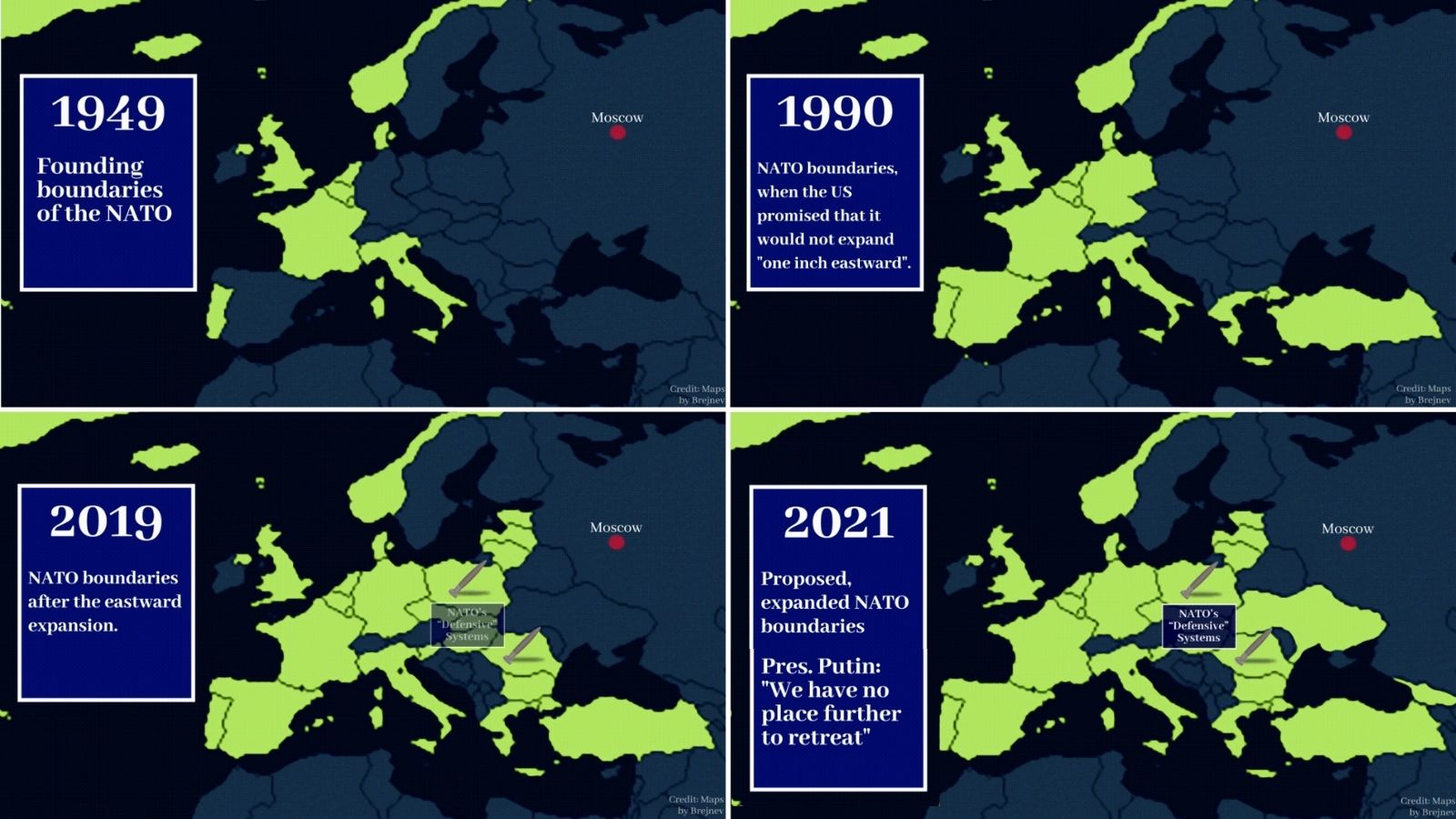 NATO expansion towards Russia’s borders 1949-2021. Image from thelarouche.org based on maps from Brejnev.

Those in the west, such as U.S. Secretary of State Blinken, German Foreign Minister Baerbock, British Foreign Minister Liz Truss and NATO General Secretary Stoltenberg, who are issuing dire warnings about the “pain” they will impose on Russia if there is an invasion of Ukraine, making hyperbolic statements about Putin’s “bullying” and “malign intent”, and disdainfully rejecting Putin’s ultimatum regarding signing the treaties, would be well-advised to look closely at the parallels between what Putin is saying and doing, and what President John F. Kennedy (JFK) said and did, when the U.S. confirmed that Soviet nuclear missile installations were under construction in Cuba in 1962.

In a nationally televised address delivered on October 22, President Kennedy said of the placement of the Soviet nuclear missiles in Cuba,

“….this swift, and extraordinary build-up of Communist missiles — in an area well known to have special and historical relationship to the United States and the nations of the Western Hemisphere, in violation of Soviet assurances, and in defiance of American and hemispheric policy — this sudden, clandestine decision to station strategic weapons for the first time outside of Soviet soil — is a deliberately provocative and unjustified change in the status quo which cannot be accepted by this country….”

JFK sent a letter to Krushchev on October 22, 1962, the same day as his televised address to the American people, along with a copy of his speech.

In the letter, he wrote,

“In our discussions and exchanges on Berlin and other international questions, the one thing that has most concerned me has been the possibility that your Government would not correctly understand the will and determination of the United States in any given situation, since I have not assumed that you or any other sane man would, in the nuclear age, deliberately plunge the world into war which is crystal clear no country could win and which could only result in catastrophic consequences to the whole world, including the aggressor.”

Arthur Schlesinger, Jr., who served as a special adviser to JFK, wrote that “we can say authoritatively that the world came closest to blowing itself up during thirteen days in October 1962”, when Kennedy ordered a naval blockade of Cuba to interdict ships suspected of bringing material for a nuclear missile buildup on the island. Robert Kennedy, the President’s brother and closest adviser, wrote in “Thirteen Days”, a book on the Cuban Missile Crisis, that they knew this action could lead to a nuclear war. Robert writes that his brother, who had personally experienced the horrors of war as a PT boat commander in the Pacific theater in Word War II, often had to counter the advice of members of the military’s Joint Chiefs of Staff, who were pushing for more aggressive action against the Soviets, including bombing the sites in Cuba and invading the island. Even as he issued an ultimatum to Krushchev, he cautioned patience, and engaged in back channel discussions, which included his brother, who served as a back channel to the Soviets, meeting with the Soviet Ambassador to the U.S., Anatoly Dobrinin, to pass on messages to Soviet Premier Krushchev, one of which ultimately helped to defuse the crisis.

Though Krushchev was worried that he would appear weak if he dismantled the missiles, avoiding the threat of nuclear annihilation proved to be a more compelling argument than preserving the image of toughness. Deploying NATO’s advanced weapons capabilities in Ukraine, including the possibility of it serving as a base for nuclear-equipped bombers and anti-missile ballistic defense systems, is certainly as great a threat to Russia today, as Soviet missiles based in Cuba were in 1962. And just as JFK called out Krushchev for lying that there were no missiles being deployed in Cuba, Putin is right in calling out the Trans-Atlantic powers for the Big Lie about NATO expansion, famously formulated by Secretary of State James Baker, who told Gorbachev that there would be “not one inch” of eastward expansion by NATO. Even without adding Ukraine, NATO has moved 1,000 kilometers closer to the borders of Russia over the last thirty years.

In the aftermath of the Cuban Missile Crisis, the back channel Kennedy opened to prevent a nuclear war expanded, allowing for the signing of a Nuclear Test Ban treaty less than a year later, on August 5, 1963. In a speech delivered to the graduating class of American University on June 10, 1963, in which he spoke of his hope that such a treaty could end the danger of nuclear war, he offered insights gained from his experience, about focusing not on adversarial interests, but common concerns.