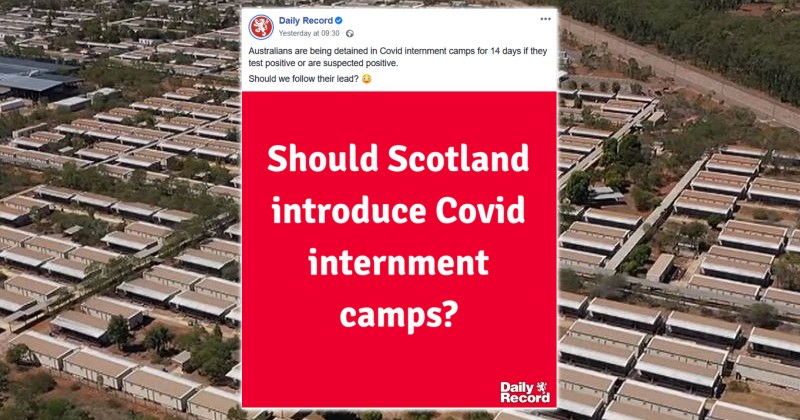 Suggests “suspected positive” cases should be incarcerated in holding facility.

One of Scotland’s largest newspapers is asking its readers if the country should follow Australia’s example by introducing “COVID internment camps.”

The question was posed via the Daily Record’s official Facebook page.

“Australians are being detained in Covid internment camps for 14 days if they test positive or are suspected positive. Should we follow their lead?” asks the post.

How much more glaringly totalitarian does the New Normal have to get before prominent “independent journalists” grow a pair of balls and call it what it is? pic.twitter.com/7pAwcbaD01

The vast majority of respondents to the question reacted with horror.

“What a disgrace of a question??? Surely the obvious answer to should there be INTERNMENT CAMPS always be a resounding NO!!!!!” said one.

“This headline is an all time low,” remarked another.

“Yes. We need protection from anyone who thinks this is a good idea. Put them there and some people at this news rag can lead the way,” commented another.

Last month, it was reported that Australian police had arrested three people who escaped from a COVID internment camp located near Darwin in the middle of the night.

As we highlighted last year, Australian authorities are building quarantine camps that won’t be completed until the end of March in order to prepare for “ongoing operations” and to house those “who have not had access to vaccination.”