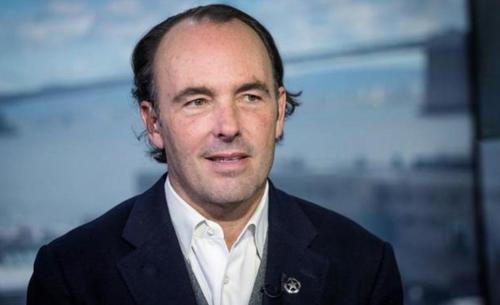 During an interview with CNBC Thursday afternoon, Hayman Capital founder Kyle Bass joined Jeffrey Gundlach and other astute observers of the market by postulating that the Fed won’t be able to succeed with its planned 4 interest-rate hikes by the end of the year.

“Gundlach said that the Fed could get to 1.5% on the Fed funds rate, which might happen in the next 12 to 18 months. But that would trigger a recession,” he said.

But by the time the Fed gets to the second hike, markets will tank, forcing the central bank to backtrack.

Kyle Bass agrees with Gundlach (and the market): “The Fed can’t raise rates more than a 100-125 bps before they have to stop”

Speaking during his first CNBC interview of the year, Bass argued that there’s a “huge mismatch, I think, between policy and reality…when you look at the reality of hydrocarbon demand…the reality is that…we’ve been pulling CapEx out of the oil patch because we so desperately want to switch to alternative energy. The problem is you can’t just turn off hydrocarbons. It takes 40 or 50 years to switch fuel sources,” Bass explained.

And as the global economy shakes off the impact of the pandemic, Bass predicted that “the same forces that applied to bring oil below zero [back in April 2020] will apply on the upside. We will get the world reopened by the middle of the year…you can’t just flip on an oil well…the only people funding the oil patch are family offices.”

As demand for oil intensifies,  the dynamic will send prices on front-month contracts “well above” $100/barrel”, Bass projected.

“There are so few people out there funding CapEx…if we reopen, you’re going to see numbers that people aren’t ready for.”

Bass’s interlocutors then opted to switch gears with some questions about China. After Wilfred Frost gently accused Bass of being a China bear, Bass insisted that he considers himself a “China realist” before launching into a discussion of China’s real-estate market.

As many investors may have learned from all the reporting about Evergrande and other deeply indebted China developers in recent months, roughly one-third of China’s economy is driven by real estate.

The surge in prices has contributed to China’s demographic nightmare, Bass said. “…the average birth rate of women in China fell below 1.2…you had an aggressive population decline because men can’t afford to buy homes because they’re priced at 20x to 30x their annual income.”

This has become a problem for China’s leaders.

“Xi needs real estate prices down and he needs them to stay down,” Bass said.

As for those who are betting on a bounce in Chinese stocks, Bass characterized this as “a fool’s game.”

As for whether or not he’d ever invest in Chinese stocks again, Bass replied:

“Fool me once but you’re not going to fool me twice…I feel like people who are investing in Chinese equities are breaking their fiduciary duty to their investors.”

Circling back to a discussion about the Fed, Bass pointed to Goldman’s call for 4 hikes this year. When the Fed does deliver on the rate hikes it has led the market to expect, “the curve is going to flatten, the long end of the curve will invert and the Fed” will likely need to throw it in reverse.

“My personal view is they can’t raise short rates more than 100-125 basis points before they have to stop,” Bass said.

Once this happens, a recession in the US will likely follow.

“I think they’re going to have to back away from that plan once they start hiking…that’s my view.

With all this in mind, “there’s no way the stock market goes up this year and it probably goes down pretty aggressively,” Bass concluded.

And once the Fed starts hiking rates, this, compounded by surging oil prices “will compound people’s inflation problems.” And that is already very modestly bring priced in… March rate-hike odds are rising to cycle highs but the odds of 4 rate-hikes by year-end are sliding…

So, after more than a decade of easy money policies, 2022 is shaping up to be a difficult year for American consumers.