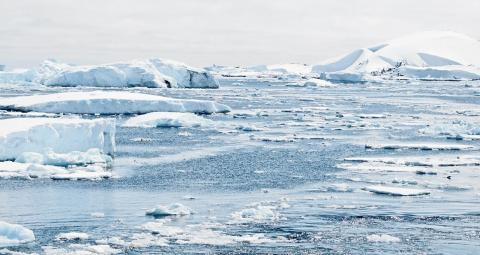 As the planet comes to the Great Reset and humanity’s survivors are sentenced to eating bugs and fake lab meat, some people, some researchers, feel that we should not be looking at the Trilateral Commission and the World Economic Forum for answers. They feel we should be looking South as in the South Pole (ie Antarctica).

At the end of the Obama administration, why did John Kerry go to Antarctica and his trip was shrouded in extreme secrecy and bizarre mystery. For example, as Secretary of State, shouldn’t a media contingent have accompanied Kerry and reported on his every move? Was this a military mission? Perhaps it was a political mission, however, we will never know because of the extreme security surrounding the trip. As I investigated this, I found Kerry’s trip was not much of a secret as to his final destination, however, nobody knew the route of his flight and exactly where he landed? Who did he meet with? Why on “God’s green earth” did Kerry go to the South Pole?

Along the same lines as John Kerry, why is Antarctica featured among the forbideen places to visit? Why has the FAA declared a no fly zone in Antarctica? By what authority does the FAA have jursidiction over the area? Why did captured Nazi scientists tell their handlers that many of the Nazi elite fled to not only South America, but to the South Pole? The Nazi scientists spoke of the place with great reticence and fear. What could have provoked such a reaction?

Many have not heard about the mysterious “Operation High Jump”, which was an alleged invasion of Antarctica by UFO’s. Yes, I said UFO’s. Some have explored this line of reasoning and some believe the Genesis 6 account of Fallen Angels. Are UFO’s controlled by Demons, Fallen Angels, Giants, etc? I have no idea, I believe I know some that does know. I will conclude this story with how the CSS will proceed.

People ask me what I fear the most? Truthfully, and only on a speculation basis, I fear the ultimate enemy of all Christians resides at the South Pole and the devastating events that we all fear will be unleashed in 2022 will come to fruition under the leadership of the most evil one as we usher in the Tribulation.

There are more questions, however, in unraveling the mystery, than answers.  Let’s take a look at the following description as a former naval officer traveled to Antarctica and accidentally saw something he was not supposed to.

“A naval officer tells us what he remembers, including seeing a huge opening in the ice in a no-fly area they were crossing with a medical emergency on board. Then he ferried a group of scientists who had disappeared for two weeks, and has specifically been warned not to refer again to this subject. As he put it, “they looked scared.” When they returned to McMurdo, their gear was isolated and they were flown back to Christchurch, New Zealand in a special plane. He discusses what he saw and experienced in detail. This is the most provocative story about what is going on in Antarctica ever presented anywhere.” (THE ASSOCIATED VIDEO WAS TAKEN DOWN)

The person that I am going to prevail upon to bring clarity to these issues is Steve Quayle and as circumstances permit, I am going to invite to Steve to come on the CSS. I must admit, I fear what he has to say on this topic and how it relates to the unfolding events and the role that Antarctica, rather who may reside in Antarctica, and how this will play out in the attempted destruction of humanity. Stay tuned, as we will announce Steve’s appearance on the CSS radio show.