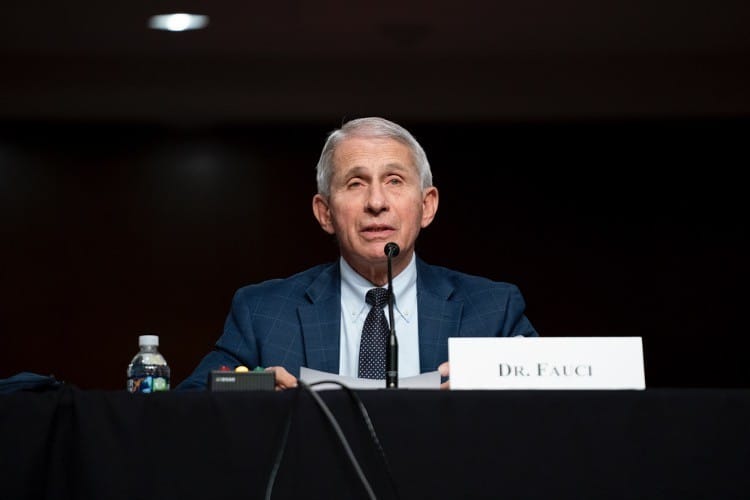 A German study a while back found that not even one healthy child died of COVID, and Britain just recently dropped its “vaccine” passport requirement along with other coronavirus restrictions. But even though the establishment “pandemic” narrative is beginning to crack around him, Dr. Anthony Fauci apparently plans to die with his “Do the same thing but expect a different result” boots on.

In fact, despite studies showing that “vaccinating” children against the China virus would kill more kids than it would save, the National Institute of Allergy and Infectious Diseases (NIAID) head is still dead set on jabbing the little ones — this time children under five.

White House chief medical advisor Dr. Anthony Fauci on Wednesday said he hopes the Food and Drug Administration approves Pfizer and BioNTech’s vaccine for children under 5 years old in the next month.

“My hope is that it’s going to be within the next month or so and not much later than that, but I can’t guarantee that,” Fauci said during an interview with Blue Star Families, a nonprofit group that supports military families. “I can’t out guess the FDA. I’m going to have to leave that to them.”

Fauci said younger children will likely need three doses, because two shots did not induce an adequate immune response in 2- to 4-year-olds in Pfizer’s clinical trials.

Of course, this could ultimately mean continual doses; in fact, signaling this, Centers for Disease Control (CDC) director Rochelle Walensky just announced that her agency is trading the concept of “vaccinated” for that of “up to date.”

Up to no good, however, is all this amounts to. For the data are in: “The real risk for healthy kids is about zero — it does appear to be lower than the flu,” said Dr. Robert Malone, a pioneer in the mRNA technology on which the China virus mRNA therapy agents (MTAs, a.k.a. “vaccines”) are based, TrialSite News reported in November.

Moreover, the MTAs “‘force your child’s body to make toxic spike proteins’, and these proteins ‘often cause permanent damage in children’s critical organs,’” the Times of India quoted Malone as saying just weeks ago.

Malone is hardly alone in sounding this alarm. Also in November, Steve Kirsch, executive director of the COVID-19 Early Treatment Fund, cited an analysis finding that jabbing the young would “kill 117 kids to save one child from dying from COVID in the 5 to 11 age range.”

(Note that the focus was on this age range because, at the time, authorities weren’t yet talking about jabbing the under-five demographic.)

Even earlier, last June, medical school professors Joseph Ladapo of UCLA and Harvey Risch of Yale also weighed in. Analyzing the government’s Vaccine Adverse Events Reporting System (VAERS) database, they concluded that “the risks of a COVID-19 vaccine may outweigh the benefits for certain low-risk populations, such as children, young adults and people who have recovered from COVID-19.” Around the same time, the World Health Organization (WHO) issued a guidance stated that jabbing children was just too risky (this didn’t stop Facebook from censoring a woman who merely related the WHO’s guidance).

Then there was the aforementioned German study. Released in December, it found that not even one healthy child in Germany aged five through 18 died of COVID-19 during the first 15 months of the pandemic. And there doesn’t appear any information indicating that this can’t be extrapolated to kids under five.

Despite this, CNBC also wrote in the earlier quoted article on Fauci’s Romper Room jab ambitions that children “under 5 are particularly vulnerable right now because they are the only age group that is not currently eligible for vaccination. Hospitalizations of children with Covid are rising as the highly contagious omicron variant has rapidly spread through communities across the U.S. over the past month.” (Emphasis added.)

The casual reader may miss that the “with COVID” designation does not mean the children were hospitalized because of COVID. In fact, even saying “with COVID” is incorrect because “COVID” is the disease (the process involving symptoms) sometimes caused by the coronavirus. In other words:

If a China virus positive child is asymptomatic, he by definition does not have COVID.

What’s more, CNBC ought to have known that talking about children “with COVID” is deceptive because the man it was reporting on, Fauci, stressed this very point on CNBC’s sister network, MSNBC, just earlier this month (video below).

So what is the point of deceptively stressing “with COVID” child hospitalizations other than to instill fear and/or push the establishment narrative? CNBC’s reporting is a good example of propaganda masquerading as news. It’s damnable.

Speaking of which, why is Fauci pushing MTAs on children in defiance of data and reason? Some may, using a certain apocryphal old line, be tempted to say to him: “When my information changes, I alter my conclusions. What do you do, sir?” But it’s not that Fauci doesn’t change positions; he changes them like an on-set model does clothes. Only, his motivation isn’t the data, but perhaps something else.

This possible “something else” was noted by Fox News’ Tucker Carlson Friday, when the commentator suggested the doctor was a narcissist and is “truly in love with himself” (striking 97-second video below).