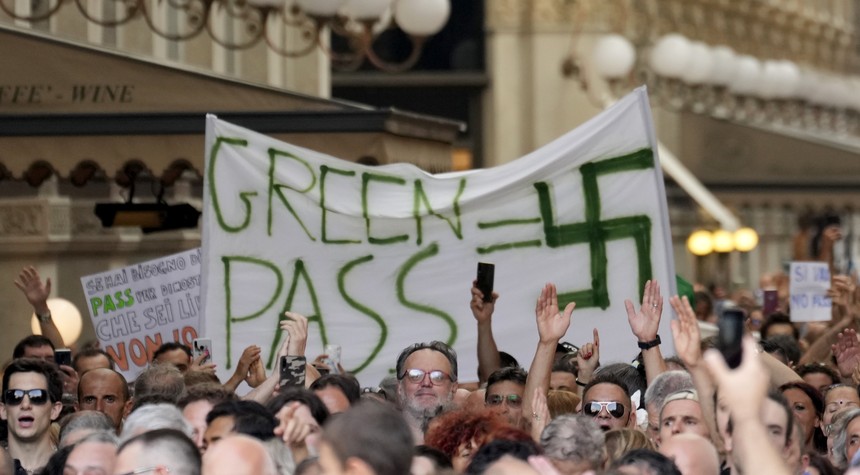 A new Rasmussen Reports poll in partnership with the Heartland Institute shows that Democrats are not becoming skeptical of the federal government’s response to COVID. Recently, Dr. Anthony Fauci said that just about everyone would eventually get omicron. CDC Director Rochelle Walensky told Americans the currently available vaccines cannot prevent omicron transmission or symptomatic illness from the virus. Still, the poll finds that most Democrat voters support vaccine mandates, and many want punitive measures against those who haven’t gotten the COVID-19 vaccine.

The partisan divide is painfully obvious in the results. According to Rassmussen:

A new Heartland Institute and Rasmussen Reports national telephone and online survey finds 48% of voters favor President Joe Biden’s plan to impose a COVID-19 vaccine mandate on the employees of large companies and government agencies. That includes 33% who Strongly Favor the mandate. Forty-eight percent (48%) are opposed to Biden’s vaccine mandate, including 40% who Strongly Oppose the mandate.

A healthy majority, 78%, of Democrats support COVID vaccine mandates, which would force people out of their jobs if they choose not to receive a vaccination. Three-quarters have a favorable opinion of Dr. Fauci. A majority of Republicans and unaffiliated voters oppose the mandate and have a dim view of President Biden’s chief medical advisor.

In addition, a majority of Democrats support harsher measures for those who decide not to receive a vaccine that can’t prevent transmission or illness:

If you want to know how far some of these biosecurity state cheerleaders will go, 29% would agree to take your children if you refuse to get the Fauci ouchie. Oddly, only 54% of black Americans are fully vaccinated, but 63% support Biden’s vaccine mandate in the poll. The survey notes that President Biden’s strongest supporters are most likely to endorse his COVID policies and the harshest punishments for the unvaccinated. “Among voters who have a Very Favorable impression of Biden, 51% are in favor of government putting the unvaccinated in ‘designated facilities,’ and 54% favor imposing fines or prison sentences on vaccine critics,” the authors note.

Other polling from Rasmussen shows that Democrats have higher rates of fear related to COVID and new variants. In December, 42% of Democrats reported being very concerned about variants such as omicron. Only 18% of Republicans and 22% of unaffiliated voters reported similar levels of concern. Democrats were also far more likely to think vaccines provided greater protection than the immunity gained from a natural infection. And these are the people who scream at others to “follow the science.”

The good news for Democrats is there are a few English-speaking islands they could move to and live out their authoritarian dreams of camps and jail for the unvaccinated. Australia and New Zealand have embraced their inner Xi Jinping, and a significant portion of Joe Biden voters would fit right in. Alternately, we can continue The Great Re-Sorting in the U.S., and people who believe in medical freedom can move to the sunshine of the South or the gorgeous mountains states in the West like Utah, Idaho, and Wyoming. The Democrats who are biosecurity authoritarians can enjoy the Northeast and stay for the complete collapse of California.

If the corporate media really wants us to believe that COVID has not caused a mass Formation Psychosis, they might want to start dumping facts and reality into the heads of their Democrat viewers. Because promoting punitive, authoritarian policies that violate Americans’ fundamental rights is patently insane. Especially over a virus that everyone, vaccinated or unvaccinated, is going to get according to their favorite bureaucrat, Dr. Fauci.