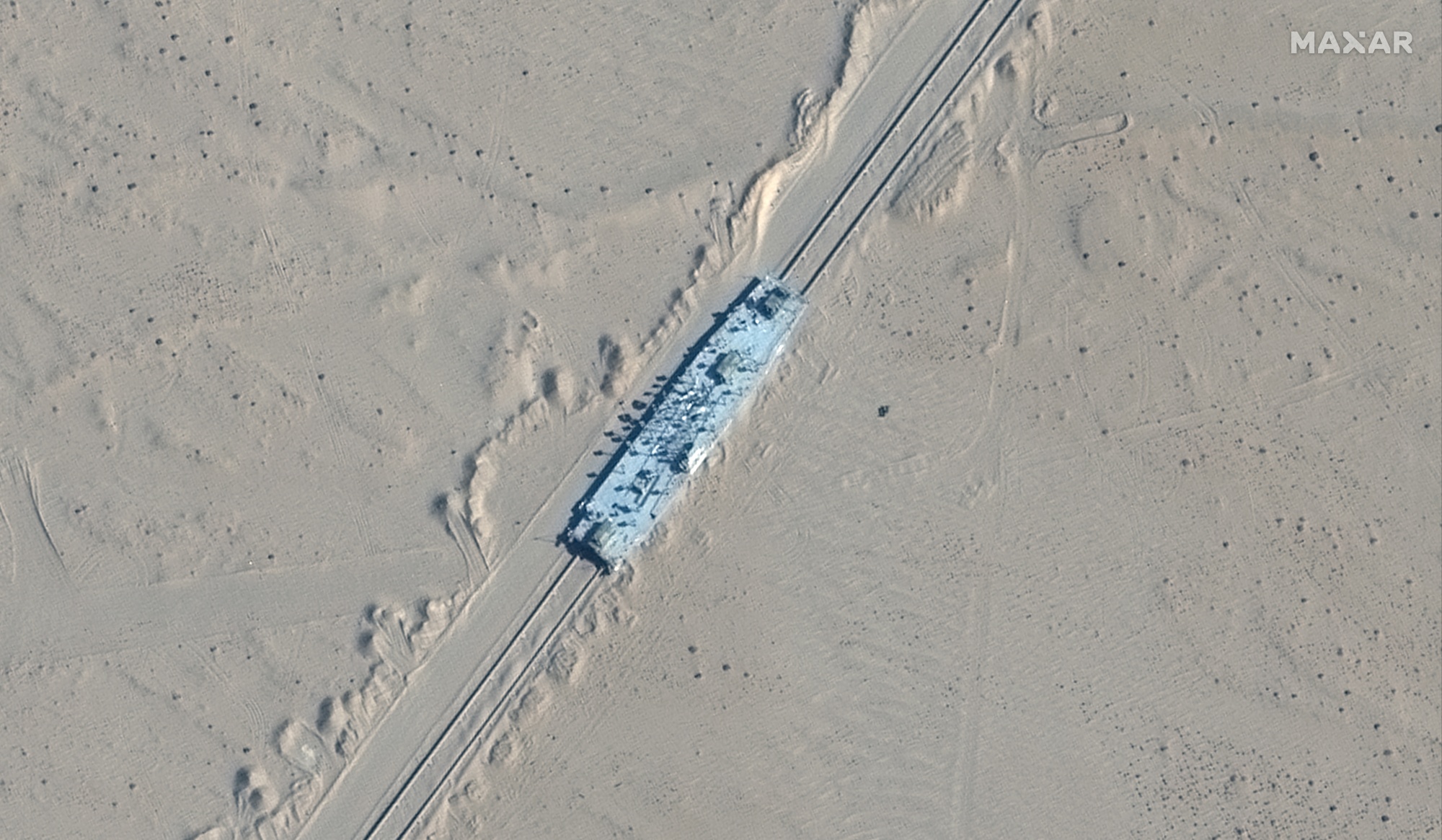 The targets have been found in the Ruoquiang region of the Taklamaken desert in central China after being picked up by the satellite imagery company Maxar. [source]

At first, a single full-size aircraft carrier shaped target was found. Then, a few days later, a smaller scale aircraft carrier (only 568 feet long) was found roughly 300 miles away outside of a small town in the Xinjian region. [source]

But how do we know these aren’t just generic aircraft carrier targets?

For starters, the dimensions.

The discovered full-size target is 1092 feet long. Would you like to take a guess at the approximate size of an American aircraft carrier? If you guessed 1092 feet long, you’d be correct.

As OSINT analyst H.I. Sutton stated, “the dimensions, layouts, and markings leave no room for discussion. These targets are designed to represent US Navy vessels. Other potential adversaries with carriers – the Royal Navy, Indian Navy, and Japanese – all appear to get a pass.” [source]

It’s not just our American aircraft carriers that are being simulated here either though. We also have satellite imagery of at least two other Arleigh Burke-class destroyer targets having been built out in the Chinese sand. [source]

But what about the destroyers?

While many news sources out there have (rightfully) focused on the aircraft carrier aspect of this story, all too few have spared but a dozen words for the destroyer targets.

Just what is an Arleigh Burke-class destroyer? What is it built for? What is the significance here? I believe that once you understand this, the story begins to make even more sense.

Arleigh-Burke class destroyers were first built in 1991 for the US Navy. So once more, we find that the Chinese are building targets specifically with practicing against Americans in mind.

These ships are built to be able to engage anti-ship defenses, being fitted out with anti-missile missile technology (amongst other things). So if you were to have some type of missile specifically designed with US aircraft carriers in mind in the works, this style of warship would help to nullify that threat.

Perhaps even more ominously, Arleigh Burke-class destroyers are the first US Navy ships to include anti-NBC warfare protection. So, whether we’re talking about nuclear, biological, or chemical attacks, the Arleigh Burke is shielded. [source]

What is likely being tested on these targets?

From what we can tell, it appears as if modifications to the Chinese DF-21D anti-ship ballistic missile (ASBM) are being tested here. This missile (affectionately referred to as the “carrier killer” by the Chinese ) has a test range not too far from where the aircraft carrier target has been staged. [source]

This type of missile is key to China’s gaining and holding control over the Pacific. The presence of an American aircraft carrier has the potential to pose a serious threat to any Chinese naval involvement in the region. Particularly in the case of an invasion of Taiwan.

A well-equipped DF-21D however, presents a neat and packaged means of ensuring the Chinese don’t have to worry about such a threat.

These types of missiles fly on a ballistic trajectory – first launching high up into the upper atmosphere before acquiring a target on the descent back down to earth. And it truly does “acquire” a target. These types of missiles look for aircraft carrier-sized objects during their descent and then adjust their flight plan accordingly.

It appears as if this happens with the DF-21D via radar seekers. The half-sized carrier target in the desert is fitted with radar reflectors. Meaning radar is going to be involved with the Chinese ASBM target-acquisition process. This makes sense considering that some of these targets are set up on 35-mile-long railway systems, in what appears to be a stage for practicing hitting moving targets. [source]

From past Pentagon reports, we find that this particular missile has the capacity to hit American ships deep out into the Pacific Ocean from the comfort of the Chinese mainland. [source]

It seems as if there is zero doubt this isn’t orchestrated. Some analysts have even pointed out that this was a clear and deliberate message. If one knows that the US is going to be engaged in satellite reconnaissance of their country, how is one expected to hide what one is doing? To build such a target in a clearly visible location does seem to be hard to interpret otherwise.

Other researchers seem to disagree on this point though, pointing out that “the best way to test it [the DF-21D] and keep it out of the prying eyes of the US military and intelligence assets is to do it inland.” [source]