That’s the big question. Looking for signs of widespread push-back but not finding much. Consumers pay whatever.

We saw that in late 2020 and all year in 2021, when prices of new and used vehicles spiked in practically ridiculous ways. People are paying more for a one-year-old used vehicle than what a new vehicle would cost, if they could get it, and they’re paying many thousands of dollars over sticker for new vehicles.

Out the window is the ancient American custom of hunting for a deal. And yet, new and used vehicles are the ultimate discretionary purchase for the vast majority of buyers that can easily drive what they already have for a few more years. But they’re jostling for position to pay these ridiculous astounding prices. And there has been enough demand to keep inventories bare and prices soaring.

During the Great Recession, potential new-vehicle buyers went on a buyer’s strike, and sales collapsed, and two of the Big Three US automakers filed for bankruptcy, along with many component makers, and sales didn’t recover for years. Consumers have this power because vehicle purchases are discretionary. But this time, consumers aren’t exercising their power to put a stop to those price spikes. Instead, they’re paying whatever.

We’ve also seen this with the price of gasoline, which at the end of November had spiked by 59% year-over-year and by 31% compared to November 2019, to an average of $3.38 per gallon, according to the EIA.

And yet, consumption of gasoline has completely recovered from the collapse and is back where it had been in November 2019, and the surge in price had zero impact on demand. Will gasoline have to go to $5 or $6 on average across the US before demand takes a hit? $7? At what point are consumers going to push back? Consumption in November ran at 9.16 billion barrels per day, same as two years ago: 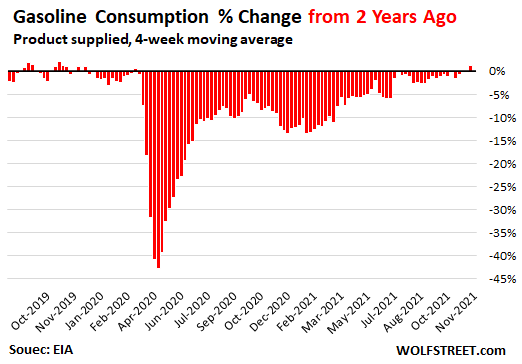 The same has been the case in other categories, unrelated to consumer goods. For example, rents have been spiking in many markets. And house prices have spiked at a ridiculous pace to ridiculous levels.

Despite widespread and large wage increases, amid this peculiar phenomenon of the labor “shortages,” inflation is now outrunning those wage increases.

And yet, consumers are outrunning inflation with their spending. Total consumer spending, including for services, and adjusted for inflation – so “real” consumer spending – in October rose by 0.7% from September, and by 6.6% from a year ago: 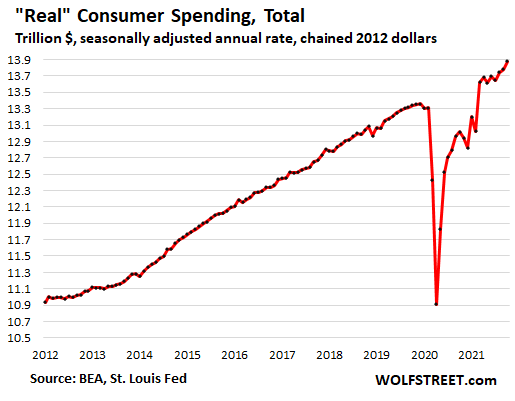 How far will prices be able to rise before consumers balk?

For the first time in four decades, consumers have allowed prices to spike. In prior episodes, when prices rose beyond a certain point, consumers started to balk, buy other products, delay purchases, or take those items off the list altogether, and enough demand disappeared that companies were reluctant to raise prices and were careful in doing so, and if they did, competitors were eating their lunch, and price increases had trouble sticking.

Companies are now willing to pay higher prices for labor, materials, and components in order to do business. And they will pass on those higher prices, including to the consumer. And consumers are paying those prices, and are demanding higher wages to pay those prices. And the cycle is established.