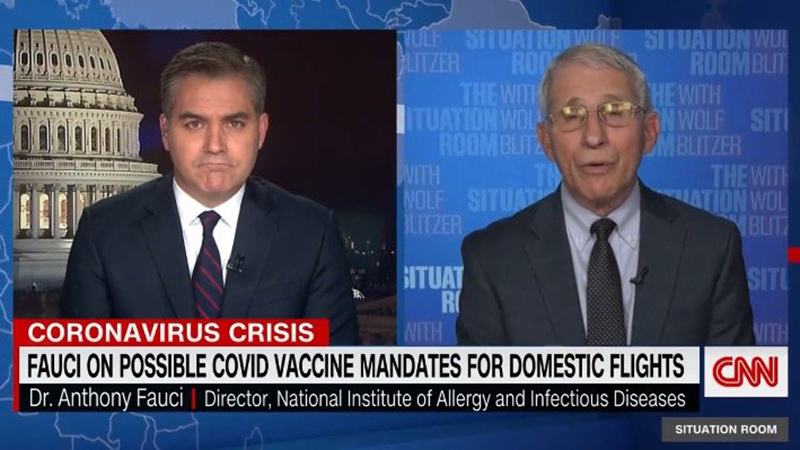 Nothing to do with ‘following the science’

In an appearance Sunday Anthony Fauci admitted that vaccine mandates are merely a “mechanism” to coerce more Americans to take shots.

Appearing on ABC Sunday, Fauci noted “A vaccine requirement for a person getting on the plane is just another level of getting people to have a mechanism that would spur them to get vaccinated.”

The comments came as part of a discussion on applying vaccine mandates to air travel.

Far from following any ‘science’, Fauci admitted that “anything that could get people more vaccinated would be welcome.”

“Anything that could get people more vaccinated would be welcome,” Dr. Anthony Fauci says when asked by @jonkarl about potential vaccine requirements for domestic air travel. https://t.co/CxSdhhlI9G pic.twitter.com/KHVeu6nmTH

In a follow up appearance Monday on CNN, Fauci admitted that vaccine mandates to fly is likely not going to happen, (because there is no science to it).

“Everything that comes up as a possibility we put it on the table and we consider it,” Fauci declared, adding “That does not mean that it is likely to happen. Right now I don’t think people should expect that we are going to have a requirement in domestic flights for people to be vaccinated.”

“It’s on the table, and we consider it, but that doesn’t mean it’s going to happen. I doubt if we are going to see something like that in the reasonably foreseeable future” Fauci added.