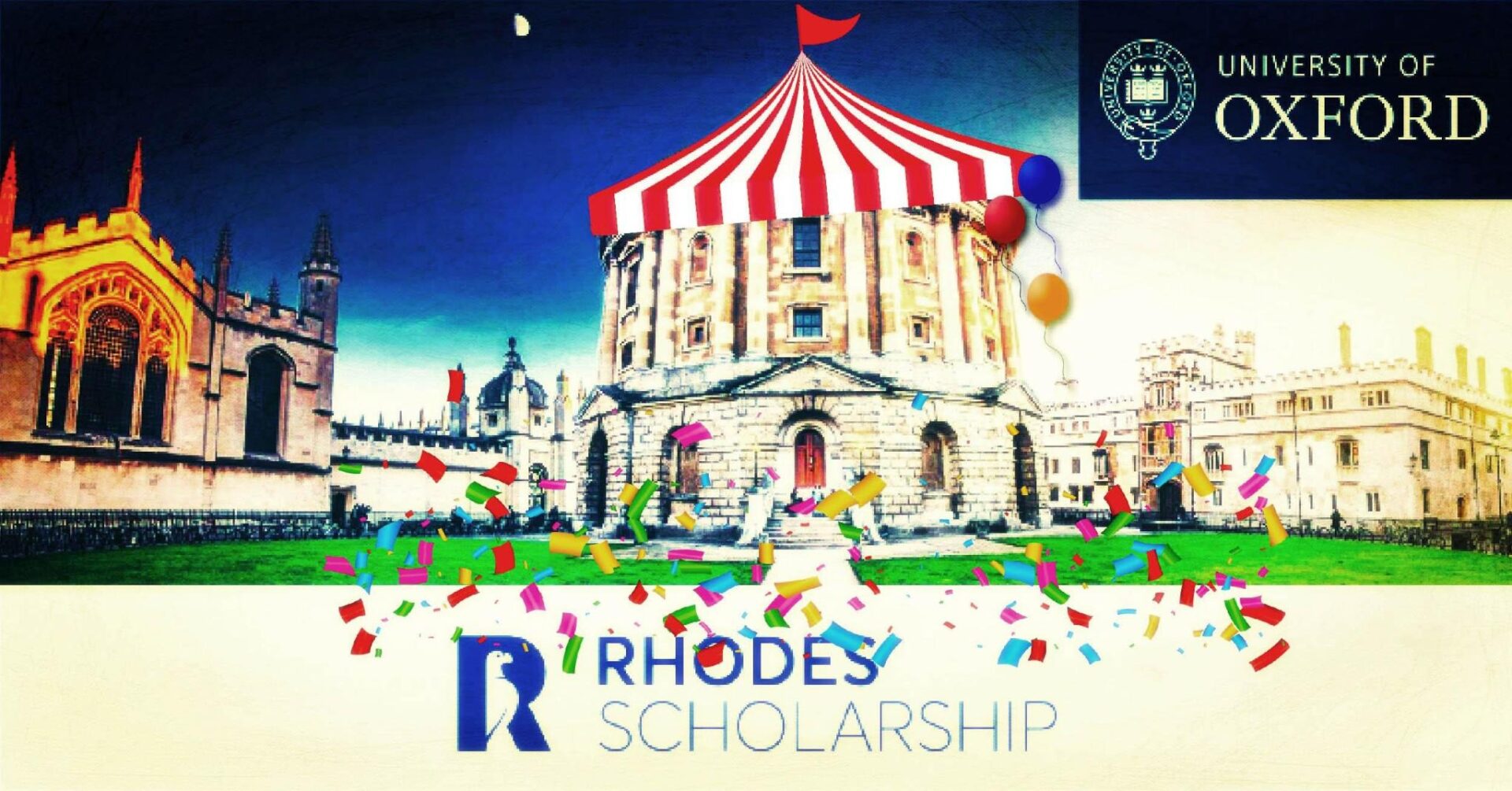 Late last year, the Rhodes Trust capped off a cartoonish 2020 by naming the most preposterous set of Rhodes Scholars in American history. Twenty-one out of thirty-two scholars that year were “of color,” ten were black, one was an illegal immigrant, one was “non-binary,” and virtually all of them were distinguished by a fanatical commitment to left-wing ideological fads of the moment. It was a worthy end to 2020. In a year symbolized by “racial reckoning” and the visible decay of every American institution, one of the most thoroughly-gutted and skin-suited once-great relics of the old America delivered a worshipful tribute to open borders, reparations, and diversity über alles.

“I think last year’s class may actually have embarrassed them a little bit,” a former Rhodes Scholar told Revolver.

Embarrassed or not, this year’s class is once again a murderer’s row of “elite” college graduates whose chief interests are almost wholly aligned with the chosen values of the moment in the Globalist American Empire. And improbably enough, 2021’s Rhodes Scholars may be an even bigger indictment of the supposed elite that appoints them.

This year’s class is less in-your-face and less fanatically focused on Diversity, but thanks to that, they are more authentically diverse, and show the wide scope of America’s political obsessions. This year’s class is still amply racialized and LGBT, but it’s also more than two-thirds women (a record). And in a fitting marker of how real freedom of thought is vanishing from American public life, the Rhodes press release proudly trumpets the work one Scholar has done to suffocate speech even more.

Trisha N. Prabhu, Naperville, is a senior at Harvard College, where she majors in Government. Trisha is the founder and CEO of ReThink, Inc., an app that proactively detects offensive digital content and gives users a chance to reconsider posting it.

At Oxford, she plans to pursue an MSc in Social Science of the Internet and a Masters of Public Policy.

In 1902, Cecil Rhodes instructed his executors to find men who exhibited the “qualities of manhood: Truth, courage, devotion to duty, sympathy for the protection of the weak, kindliness, unselfishness, and fellowship.” One hundred nineteen years later, his will honors schoolmarms creating apps that tell people what they can post on the Internet.

Rhodes’ will also asked that scholarship recipients be chosen based on “moral force of character and of instincts to lead.” For the Rhodes Trust of 2021, though, “leadership” is displayed solely through rigid adherence to the most up-to-date pages of the progressive catechism.

From the Rhodes Trust:

Sydni A. Scott … has done significant work on diversity, equity, and inclusion issues, including developing training for dozens of universities participating in The Women’s Network. Sydni also founded The Amendment Project, an organization mobilizing high school students around the issue of reparations, and worked to help secure passage of a local reparations resolution in Tulsa.

Tawreak J. Gamble-Eddington … is currently completing an MPhil in Race, Ethnicity, Conflict at Trinity College Dublin, where he is a Mitchell Scholar. Ty was a campus leader at Union College, serving as President of both the Black Student Union and Union Pride and helping found a My Brother’s Keeper program. He was also named to the steering committee for the Presidential Initiative on Race, Power, and Privilege.

Samantha C.W. O’Sullivan … founded and led a student organization that promotes activism related to the legacy of slavery and has published articles on dress codes and bias against Black girls. … She is fascinated by how different languages, including the language of the African diaspora, Gullah, provide insights into different perceptions of the physical universe.

Aimee B. Clesi[‘s] … honors thesis focuses on racial disparities in death penalty sentencing in the U.S. She has pursued multiple legal internships, including with the Office of the Federal Public Defender for the Northern District of Florida and the American Bar Association Death Penalty Representation Project. At Oxford, Aimee plans to pursue a DPhil in Criminology and focus her research on wrongful conviction and the execution of innocent persons.

Shreeya Singh … is founder and president of Students Against Hindutva, from which she organized nationwide protests against India’s anti-Muslim policies.

Trisha N. Prabhu, Naperville, is a senior at Harvard College, where she majors in Government. Trisha is the founder and CEO of ReThink, Inc., an app that proactively detects offensive digital content and gives users a chance to reconsider posting it.

Justin G. Hadad …  is currently an Academic Visitor at the University of Zurich where he is researching how economic theory can optimize the placement of refugees into new communities.

Klarke J. Stricklen … majors in American Studies and African American Studies. Klarke’s undergraduate honors thesis concentrates on Black reparations by arguing for the moral responsibility of higher educational institutions with ties to the slave trade and slavery. She is also a research assistant for The Roberson Project on Slavery, Race, and Reconciliation.

Joshua A. Babu[‘s] … senior thesis set out to determine the longitudinal effects of gender-affirming hormone treatment on the psychological health and telomere homeostasis of trans youth. Active in policy and advocacy, Josh drafts proposals on how state representatives can rectify legislation that discriminates against LGBTQI people in healthcare.

“This is a bigger change than it seems,” she said. “The state committees under the old system were a bit more constrained to seek some kind of universal sense of excellence, because they couldn’t just pick the winners — they had to pick the candidates from their state they thought would also impress the regional committee. Then, on the other side, the regional committee was constrained to picking from among the twelve-ish candidates their states sent up.”

The Scholar noted that under the old system even if a committee wanted to choose an under-qualified candidate for the sake of “diversity,” they tended to only make one such pick among the four winners. Under the new system, with 16 regional committees, there is still a tendency to make at least one “diverse” pick, but now such winners comprise half of all selections rather than just one fourth.

The new selection process encourages left-wing activism over real achievement in another way, the Scholar said.

“The old system involved up to 500 people, mostly older Rhodes Scholars, interviewing across the two levels,” she said. “Now the system involves perhaps 100 or 120 people, so it’s much easier to stack the entire process completely with liberals. And that’s definitely what the US Secretary who runs it wants to do.”

We touched based with that former Scholar again after this year’s announcement.

“The Rhodes Trust remains unable to balance a class properly,” she said. “It used to be that they managed to produce classes with true diversity of interests and, yes, even demographics, which they don’t anymore. The new single-tier [nomination] system causes them to select activists for some particular cause or another instead of the all-around excellence that characterized Rhodes Scholars of yesteryear. Just look at probably the most famous young Rhodes Scholar, Pete Buttigieg. Would he have been selected in 2020 or 2021? He’s a white male with pretty conventional political interests, by the standards of these latest classes—he’s not an activist now, and certainly wasn’t when selected.”

Ironically, the intense political obsession at Rhodes means that it is losing its ability to identify the real political leaders of the future, Revolver’s source said.

“I’m not even talking about selecting outstanding young conservatives or less-political types (which the Trust also used to value—no longer). I think Rhodes is almost certainly missing out on the Bill Clintons and Pete Buttigiegs of this generation, in favor of selecting those who have well-honed skills in grievance mongering and identity activism.”