House prices, instead of spiking by over 2% from one month to the next, and by over 20% year-over-year, spiked by “only” 0.8% for the month, the least explosive spike since January, and spiked by “only” 19.1% year-over-year, the least explosive spike since June, according to the S&P CoreLogic Case-Shiller National Home Price Index today. House prices rose in 18 of the 20 metro areas in the index – by just a tad in some; by a leap in others.

“The slowing of home prices is most notable in colder and more expensive areas, as well as middle-tier priced homes where homebuyers may have less wiggle room in their budgets,” said CoreLogic Deputy Chief Economist Selma Hepp today. “Low-tier priced homes are still in higher demand as entry-level buyers and investors continue to compete for the very limited supply.”

House prices have performed truly crazy feats, with prices in Phoenix being up 32% year-over-year, 28% in Tampa, 26% in Miami, 25% in Las Vegas, and 24% in San Diego. But even in those crazy markets, price increases have been slowing.

The charts below show the  metropolitan areas with the most stunning price spikes, as tracked by the Case-Shiller Home Price Indices today. In terms of the time frame, note the lag: Today’s “October” data are a three-month moving average of closed sales that were entered into public records in August, September, and October.

It’s not a miracle of houses getting bigger; it’s that the dollar is losing purchasing power. The Case-Shiller Index, by using the “sales pairs method,” compares the sales price of a house when it sells in the current period to the price of the same house when it sold previously. It includes adjustments for home improvements and the passage of time since these sales pairs can be decades apart. By tracking the price of the same house over time, it is a measure of how many dollars it takes to buy the same house, and it’s therefore a measure of the loss of the purchasing power of the dollar with regards to houses, and therefore a measure of house price inflation.

Los Angeles metro: Prices of single-family houses jumped 1.3% in October from September, and by 18.5% year-over-year. 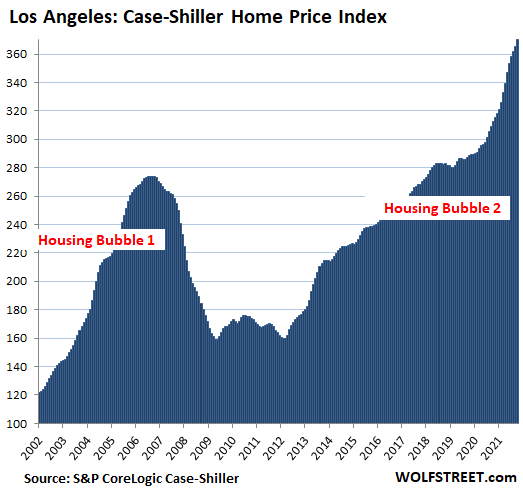 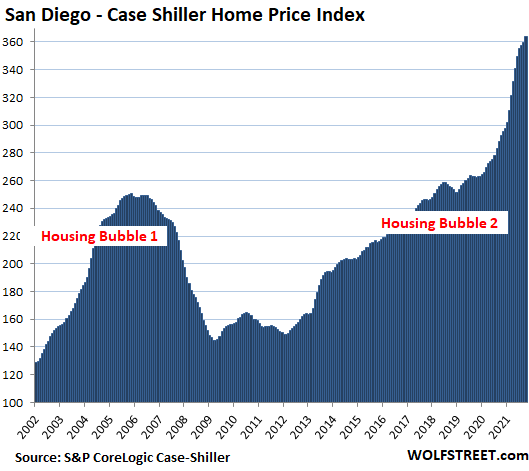 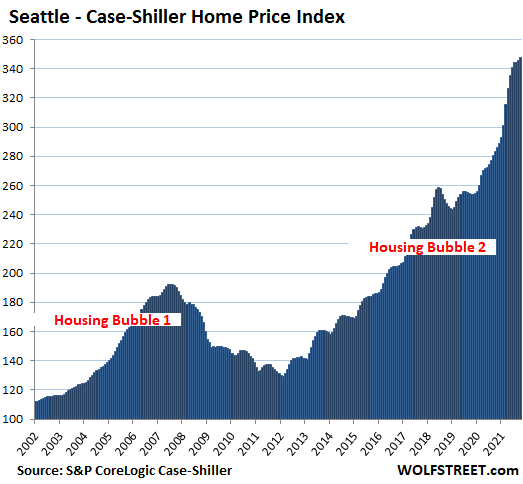 San Francisco Bay Area (counties of San Francisco, San Mateo, Alameda, Contra Costa, and Marin): House prices were flat in October with September, after having inched up just 0.1% in the prior month. October was the first month since June 2020 that prices didn’t move up. This whittled down the year-over-year spike to 18.5% from peak-heat of 21.9% in June and July.