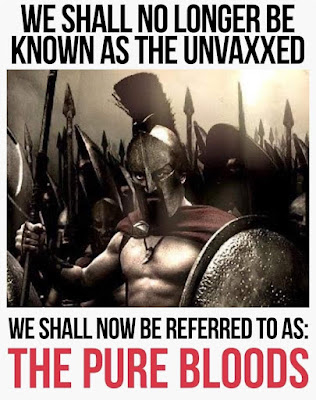 Apparently rather than acknowledging the reality that Covid is now the “new” flu, and getting back to living life, the maniacal Covid cultists continue with their fear and intimidation campaign to continue to grab power and control of the populace.

The stories, reports, images and videos seen below, shows how fast parts of America have become a police state, where individual rights are violated on a daily basis, all under the guise of a never-ending “pandemic.”

Let’s take a look at the latest from the “maniacal Covid cultists.”

• We see comments from CNN contributor,  Anna Navarro, stating “Unless you have a LEGITIMATE medical reason, if you’re not vaccinated, I don’t want to see you, talk to you, work w/you, socialize w/you or know you. It’s enough. Your “personal freedom” is holding the rest of us hostage. It’s selfish and stupid.” 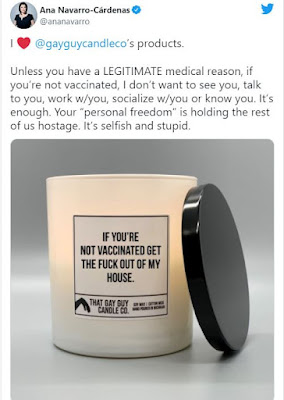 Needless to say people are telling her that she has just given them yet another reason to never get the Covid vaccine.

Notice she is accusing the unvaccinated of holding her “hostage” instead of the state/city leaders that are literally holding entire cities hostage to the “show me your papers” dictates.

• We see an activist/protester, being handcuffed and arrested in Brooklyn at Panera Bread, for demanding he be serviced without proof of vaccine, showing that New York has become a police state where “show your papers” is now an openly accepted form of tyranny.

Below you will see him carrying an American flag and showing his vaccine passport which is a copy of the constitution of the United States.

His actions are meant to, and do, highlight the state of what America is coming to.

One of the best descriptions of what we just saw above and are seeing in cities/states run by liberal Democrats, comes from TV host Jedediah Bila, who states:

Someone who is unvaccinated but not sick with Covid can’t sit inside a NYC restaurant. But a vaccinated person with an active, transmissible Covid infection can flash a vaccine passport & gain entrance. Does that make sense to you?

I didn’t think so. The mandates are horses**t.

• We see nasty online trolls with 90K followers telling a parent that believes they should make their decisions for their own children, “Kids funerals suck. Have fun when yours die.” Of course the tweet was deleted, but the internet is forever, so it was naturally caught as a screenshot before it could be memory-holed. 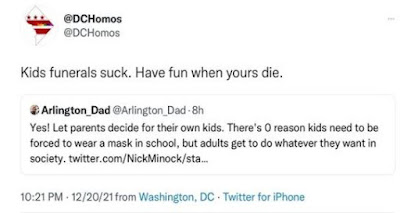 • We see six people, including an Army veteran, arrested at the Cheese Cake Factory in NYC, for refusing the leave after being told they would not be served without their “papers,” aka proof of vaccine.

Bosch, 42, said the group, which included young children, including his 6-week-old daughter, asked to be seated and they were asked for their vaccination cards, which they did not have. They were then denied service, he said.

As a form of non-violent protest, the group took over a space in the middle of the restaurant and the police were called when they refused to leave, Bosch said. Responding officers arrived and six people were arrested and cited for criminal trespassing.

As an aside: Maybe had they vandalized, started burning stuff down, looted and became violent, like Antifa/BLM protesters, they wouldn’t have been arrested.