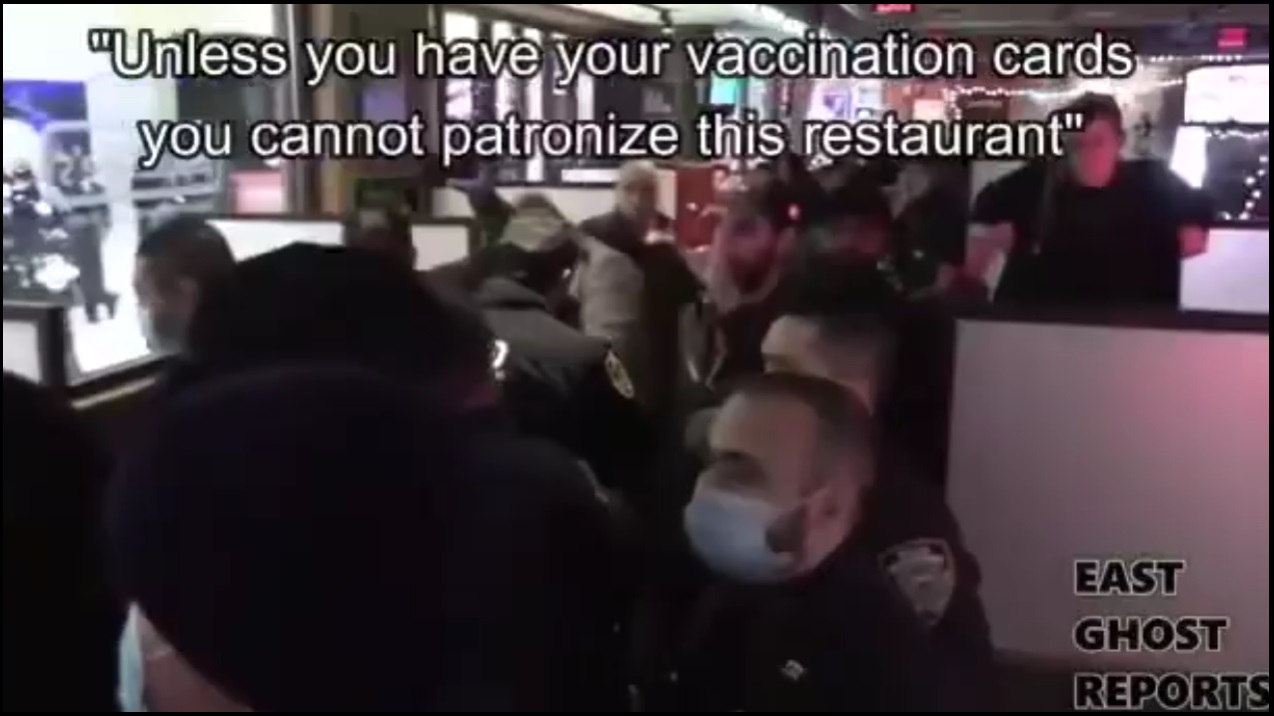 Comrades, many American citizens stood jaw agape as they watched Australian metropolitan police departments begin cracking skulls and making arrests for violating COVID rules and restrictions. Yes, it always seemed like Australia, New Zealand and Europe were the beta testing ground to see if police would comply with jackboot arrests of their own community.

Well, now we can see those same tactics being deployed in the U.S.

Watch this video below to see the New York Police Department (NYPD) start deploying vaccination police, and making arrests of people who do not present papers to prove their status. WATCH:

When asked why they would arrest their own community members simply for being unvaccinated and wanting to eat a sandwich, the police turn a deaf ear.  This should not be a surprise.  When it comes to getting their own paychecks, or putting food on their family’s table, just about every single police officer in the U.S. will load you in the cattle car…. while saying, “It’s just my job.”

We watched this escalate in Victoria, New South Wales and various regions throughout Australia, as well as France, Germany, Austria and regions in Europe.   If things go as they did in previous examples, when/if the citizens of New York City begin to push back against this, there’s no reason to believe the NYPD will not respond with armored cars, riot teams and rubber bullets.

It is profoundly disturbing, sickening and wrong, but shouldn’t be too surprising given what we have witnessed in other countries.  When push comes to shove, very few police will not participate; most will do exactly what they are told by the local and state officials.

NYPD is the first to start showing their jackbooted nature.  Next will likely be Chicago and Los Angeles; it spreads from there.  Once the Blue State governors and city officials see they can turn to violence in order to retain their dictates, orders and demands, that violence will not stop – nor will it diminish.

The best course of action is to see the world as it is, not as you would wish it to be.

Watch the police in action, and take note of their irrelevance to the questions put to them.  There have been multiple psychological studies of this behavior over the years, and all end up with the same result – the police will do what they are told regardless of their own views on the matter.

Many police and law enforcement officers will tell you they will not comply with such orders.  However, when those orders actually materialize, the police compartmentalize their behavior and do exactly what they are told.

The local police in your town will do exactly the same if they are ordered to carry out the rules of the city officials in your area.  Your local police will do this regardless of what they might say right now.

As we witnessed in Australia, once the police officers start carrying out these types of operations, the only way to make it stop is to make them uncomfortable.   That requires mass non-compliance by large numbers of citizens to overcome the mental barrier the police use to justify their conduct.

Then, after the police start getting uncomfortable arresting moms, dads and children, it takes open and vocal public shaming on a large scale toward the officers on a community level to get them to stop.

Remember, when the Chinese government first told the regular army to open fire on the students in Tiananmen Square, the soldiers would not shoot.  The Chinese Communist government then brought in the Mongolian divisions who had no connection to the local community.   You know what happened next.