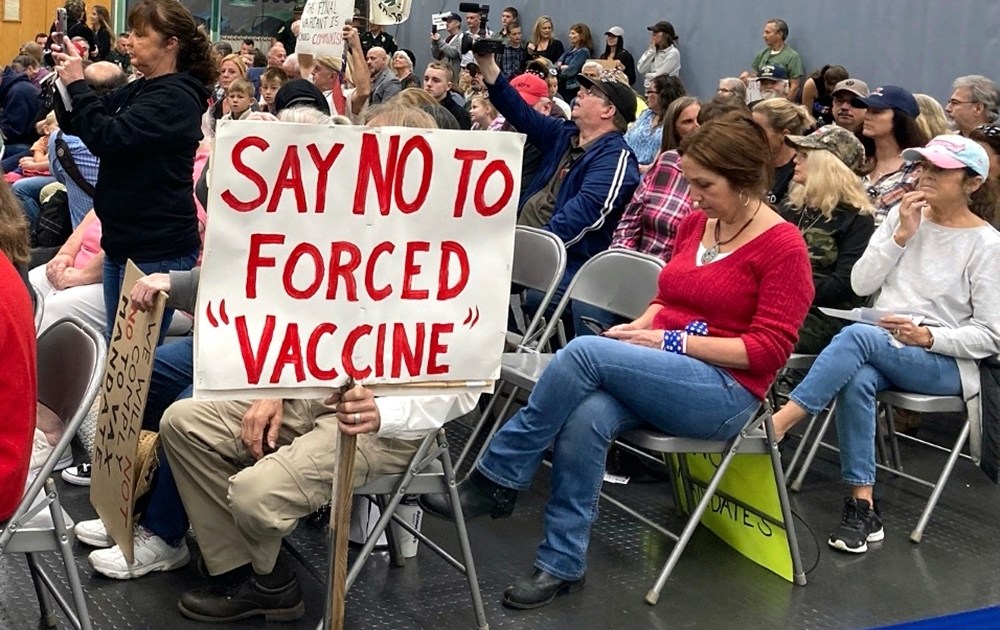 Yesterday, Ursula von der Leyen, the President of the European Commission, held a press conference where she talked at length about her “concerns” over the EU’s low vaccination rate, and how best to “fix” it.

When asked about making vaccines mandatory, she said:

It is understandable and appropriate to lead this discussion now – how we can encourage and potentially think about mandatory vaccination within the European Union. This needs discussion, this needs a common approach, but I think it’s a discussion that has to be led.”

Two or three years ago, I would have never thought to witness what we see right now, that we have this horrible pandemic, we have the life-saving vaccines but they are not being used adequately everywhere. And thus this is an enormous health cost,”

Of course, the idea that the EU nations are going to “debate” mandatory vaccinations is a joke, they are more likely to enforce them no matter what.

But any real, rational debate was over as soon as the EU and the vaccine manufacturers both admitted that the vaccines do not work.

Every day we hear about some famous person or other testing positive “despite being vaccinated”.

The EU has already hinted that their vaccination passes (which, ironically enough, they appear to have been planning for “two or three years” despite von der Leyen claiming they never saw the pandemic coming), will expire in nine months.

Why will they expire?

Because the “protection” allegedly conferred by the vaccine wears off.

How fast does it wear off?

They have no idea.

The alleged emergence of the Omicron variant makes the situation even worse, from the establishment point of view. Indeed, it could be argued the first real casualty of the Omicron outbreak was narrative cohesion.

Experts are already warning that the Omicron variant may be resistant to the vaccines, and the CEO of Moderna added his voice to this chorus yesterday, saying:

I think it’s going to be a material drop [in vaccine effectiveness]. I just don’t know how much because we need to wait for the data. But all the scientists I’ve talked to…are like ‘this is not going to be good’.”

Even if these warnings prove incorrect, and the mainstream suddenly backtracks and starts reporting that the vaccines work “better than expected” to combat Omicron, that’s irrelevant.

They have just admitted that the “vaccines” could stop working the moment there is a new mutation. And viruses mutate a lot.

The only thing they don’t know is what the long term side effects of the vaccines are, a fact admitted by Pfizer themselves in their supply contracts:

Now, here’s the all-purpose disclaimer: This is not admitting that Covid19 is dangerous, the pandemic real or in any other way endorsing the narrative. Rather, and this is important, it’s pointing out that even on their own terms the establishment’s plan for compulsory vaccination does not make any sense at all.

The current narrative is that:

These are not fringe ideas or baseless theories, they are the self-contradictory supposed “facts” of the schizophrenic covid story.

Going entirely by the mainstream’s own words, and completely on their own terms, any possible case for mandatory vaccinations is dead.

The “Omicron variant” killed it, even if it never killed anything else.