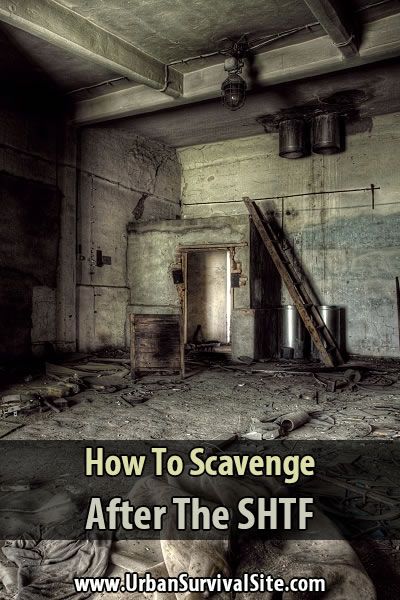 Here’s a fun fact. Approximately one percent of the urban population in developing countries makes their living from scavenging. And more than 15 million people get their income from waste picking worldwide. Scavenging is a multi-billion dollar industry and a way of living for many, even in wealthy nations.

It’s also one of the oldest economic activities known because living is consuming. Therefore we produce waste simply by existing. The type and amount of waste generated are constantly changing. The more wealthy and urbanized a society becomes, the more waste it will produce. A lot of folks think of scavenging as an activity that only happens after the SHTF, but it’s a way of life for many on the planet.

Waste management is crucial. Most people are just content to have their trash magically disappearing from the front of their houses every day and give this no second thought. I suspect society, in general, would be a lot more discerning and restrained (and respectful) about consumption habits if a more significant number of people became more aware of this process and its implications, but I digress.

What’s happening out there

Judging from what I have seen, the numbers above have grown rapidly since 2020. The social agents I speak with corroborate. The news is bad but still doesn’t show an accurate picture.

I’ve been meeting a lot more families that lost jobs, income, and homes. They are now in the streets and are scavenging their way to survive. Most people I spoke with admit they never thought they’d come to this, but insist that thinking like that is a mistake. It can and does happen anywhere, to anyone. Also relevant, it affects everyone, not only those who get evicted. This situation has developments that will impact the entire society.

I confess that despite forecasting a more severe slump since 2008, I always hoped we’d never come to this point and for so many. But now it seems that it won’t stop there and get worse before it turns again, unfortunately.

Why and how scavenging connects to prepping and survival?

When resources become scarce, people look everywhere for stuff. We naturally go from the easiest to the hardest when it comes to getting what we want or need. In other words, we start shopping at the nearest grocery store and end up scavenging as the situation worsens.

People scavenge for food to eat, for clothing to wear, and for appliances to use. Many make their living from collecting and selling scrap and recyclables. Scavenging takes place everywhere and at all times but grows exponentially during a crisis or some other SHTF. So, yes, it’s genuinely a survival activity.

“One man’s trash is another man’s treasure.”

A lot of still-in-good-condition and usable stuff gets discarded all the time. Some of the stuff thrown away would be viewed as pure gold by the have-nots. Scavenging is a productive way for urban preppers to acquire items that can be used, recycled, repurposed, or sold.

Most people don’t even want to think about it

Understandably so: scavenging deals around trash and waste, and no one likes that. We instinctively know it’s unhealthy. But mostly, it’s seen as unpleasant and somehow detached and far from their reality. And yet, it’s so close at the same time.

So, there are serious mental and social barriers right there. I advocate thinking in different terms. Scavenging is a last resort, yet a legitimate and dignified activity, in my opinion – especially when compared to the option taken by many (crime, in case it isn’t clear). It’s hard and brings some risks, but it can come useful during difficult times.

“I’ve done so much with so little that now I can do anything with nothing.”

We hear that quite a lot when we’re in the streets, especially among the have-nots. Those who are (or have) hit rock bottom and reside on the fringes of society know all too well. For years, I followed and interacted with scavengers (or “catadores,” as we call them here). Still do on occasion. I’ve rummaged trash for food, “stuff,” and even tried a hand at collecting and selling recyclables. I faked trash-picking a couple of times to get out of trouble (I will go into this below).

Some scavengers steal mostly metal parts from public lighting fixtures, manhole covers, handrails, electrical wires, even parts of statues and plaques from civic patrimony to sell as scrap or to vendors in second-hand or black markets. Cast iron, steel, or brass parts, especially copper, weigh quite a bit and are of high value.

But that’s a crime in most places and can be punished by law or by “popular justice.” It’s not uncommon for someone to get shot or badly beaten when caught stealing from private property or public appliances and utilities. It’s also risky: thugs do get hurt and even electrocuted when trying to steal electrical wiring, for instance.

For the most part, scavengers have no time nor inclination to follow safety rules and roam town searching for stuff to make a living. It’s very physically demanding to say the least. Coming back empty-handed means no food on the plate.

There aren’t many rules, but the few ones that exist must be respected, or there might be retaliation. Care must be taken with authorities and other street folks too. After all, it’s the dog-eat-dog life of the big city. Scavengers can and do get assaulted, robbed, scammed, just like everyone else.

Scavenging has four main practical aspects to it: what, how, where, and when

How is related to the safest and most productive ways to scavenge, using protection (gloves, perhaps a dust mask and goggles), the right tools (a crowbar, a poking pole, etc.), and the means of transport for the stuff collected.