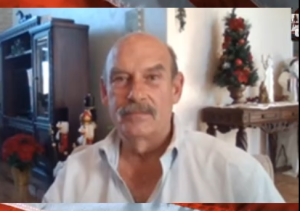 Precious metals expert and financial writer Bill Holter says huge lies and massive money printing have held the financial system together.  His big prediction for 2022 is that both the lies and money printing are going to get much worse.  Holter explains, “The risk for a meltdown from these levels, the risk has never been higher or could be higher than it is right now.  You have got everything going in the wrong direction. . . . in the year 2022, I will say without the second coming of Jesus Christ, things are not going to get better.  At this point, evil has its hand on too many controls.  They control too many avenues.  They control the media and just go right down the list.  Evil has too much control at this point.”

Holter says forget what the Fed is saying about “tapering” the easy money policies and raising interest rates to fight inflation.  Holter contends, “They just cannot do it.  . . . . We have an economy that it’s clear it’s beginning to slow.  It’s clear that inflation is raging.  So, the Fed is stuck in a corner.  They need to raise interest rates, and they need to fight inflation, but at the same time, if they do that, they will pop the debt bubble.  That’s the rock and the hard place the Fed is in between. . . . What they are saying is we are going to take the patient off life support, and with the biggest credit bubble of all time, they can’t do it.  If they do, you will see a credit temper tantrum turn into a credit meltdown.”

Holter also sees the narratives of lies giving way to the truth.  Holter says, “The narrative on so many things is blowing up.  Senator Joe Manchin saying that he’s not going to go along with spending another $2.5 trillion. . . . The White House is trying to pass off as truth that spending another $2.5 trillion is going to tame inflation.  This is truly George Orwell 1984, animal farm or whatever you want to call this.  Up is down, black is white and truth, well, you can’t find truth today.”

Holter is also predicting the vax injections and the narrative that they are working is going to collapse.  Now, to be “fully vaccinated,” you need a booster.  Even those people are getting Covid.   Just ask triple vaxed Senators Booker and Warren, who both recently tested positive for Covid.    Holter explains, “That’s one of the narratives that I believe will fail in 2022.  The reason being is people can see with their own eyes what’s happening.  They know people who have had adverse reactions.  They know people who have died.  You can tell someone it’s sunny outside, but when they walk outside, the moon is out.  They know they are being lied to.  That’s where we are headed, and I think we are really close.  I think in the first quarter of 2022, the vax narrative is going to completely collapse.  With it will go a great deal of misplaced confidence. . . . Markets are held up by confidence.  The dollar is held up by confidence.  The credit markets are held up by confidence.  Anything you do to ding or hurt confidence is going to have an adverse effect on assets, not hard assets, paper assets and all that runs on confidence.”

Holter is predicting the Fed is going to be forced to start another round of QE in 2022 and not cut back.

Another 2022 prediction that Holter is seeing is “some type of failure to deliver in the of physical gold and silver markets because the stress in the gold and silver supply, I have never seen in my life.”

There is much more in the nearly 1 hour interview, including predictions on Donald Trump being President again, Senator Joe Manchin leaving the Democrat Party, a coming false flag and even war.  In short, Holter says, “This is good versus evil.  It’s really that simple.”