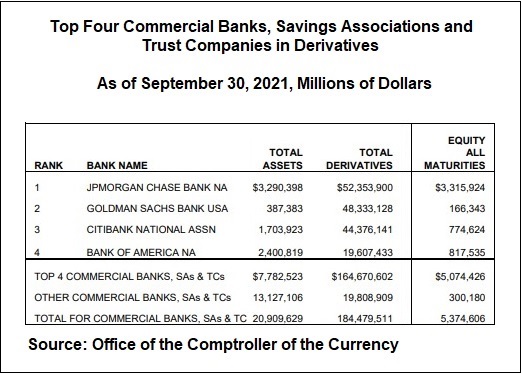 The Office of the Comptroller of the Currency (OCC), the regulator of national banks that operate across state lines, released a report on Monday that details the quantity and variety of derivatives held by commercial banks, savings associations and trust companies as of September 30. (According to the Federal Deposit Insurance Corporation, there were 4,914 commercial banks, savings associations and trust companies operating in the U.S. with FDIC insurance as of September 30.)

Why is any taxpayer-backstopped bank in the United States allowed to own anything near a trillion dollars in stock derivatives, let alone a bank like JPMorgan Chase that has admitted to an unprecedented five criminal felony counts brought by the Justice Department in the past seven years, with three of those felony counts for rigging markets.

The Dodd-Frank financial reform legislation of 2010 promised Americans two things pertaining to derivatives. First, it promised that federally-insured banks would no longer house the derivatives that blew up much of Wall Street and the U.S. economy in 2008. This was known as the “push-out rule” where derivatives were to be pushed out to other parts of the bank holding company which could be wound down in case of insolvency, without impacting the federally-insured bank – or so the theory went. That promise was derailed in December 2014 when Citigroup (the recipient of the largest bailout in U.S. history during the 2008 financial crisis and its aftermath) was able to get its pawns in Congress to repeal the push-out rule by attaching an amendment to a must-pass spending bill to keep the government running. (See our report: Meet the Two Congressmen Who Facilitated Today’s Derivatives Nightmare at Wall Street’s Mega Banks.)

JPMorgan Chase is the same bank that paid its various regulators a total of $920 million in fines in January of 2013 for its infamous London Whale derivatives scandal. The bank had used deposits in its federally-insured bank to gamble in derivatives in London and lose $6.2 billion of depositors’ money along the way. Its consent decree with the OCC said this:

“The OCC’s examination findings establish that the Bank has deficiencies in its internal controls and has engaged in unsafe or unsound banking practices and violations of 12 C.F.R. Part 3, Appendix B (Market Risk Management Amendment) with respect to the credit derivatives trading strategies, activities and positions employed by the CIO on behalf of the Bank. The deficiencies and unsafe and unsound practices include the following:

“(a) The Bank’s oversight and governance of the credit derivatives trading conducted by the CIO were inadequate to protect the Bank from material risks in those trading strategies, activities and positions;

“(b) The Bank’s risk management processes and procedures for the credit derivatives trading conducted by the CIO did not provide an adequate foundation to identify, understand, measure, monitor and control risk;

“(c) The Bank’s valuation control processes and procedures for the credit derivatives trading conducted by the CIO were insufficient to provide a rigorous and effective assessment of valuation;

“(d) The Bank’s internal audit processes and procedures related to the credit derivatives trading conducted by the CIO were not effective; and

“(e) The Bank’s model risk management practices and procedures were inadequate to provide adequate controls over certain of the Bank’s market risk and price risk models.”

The overarching question is why is this federally-insured bank still allowed to trade any derivatives by its banking regulators, let alone $3.3 trillion in stock derivatives? The same man sitting at the helm of the bank at the time of the London Whale fiasco, Jamie Dimon, remains the Chairman and CEO of JPMorgan Chase.