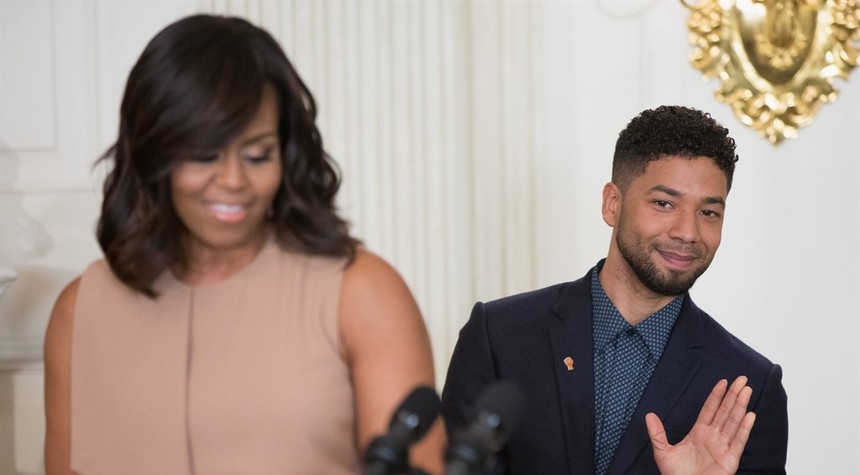 Now that Jussie Smollett has been found guilty of faking an anti-gay, racist hate crime against himself, it’s a good time to reflect on how the left rushed to judgment about Jussie’s absurd claim simply because it fit “the narrative.”

“What happened today to [Jussie Smollett] must never be tolerated in this country,” Joe Biden tweeted. “We must stand up and demand that we no longer give this hate safe harbor; that homophobia and racism have no place on our streets or in our hearts. We are with you, Jussie.”

Kamala Harris praised Smollett as “one of the kindest, most gentle human beings” she knows and declared his attack was a “modern day lynching.”

“No one should have to fear for their life because of their sexuality or color of their skin,” she added. “We must confront this hate.”

Senator Cory Booker echoed Harris’s sentiment that the alleged attack was an “attempted modern-day lynching” and suggested the incident was proof that Congress needed to pass an anti-lynching bill.

“To those in Congress who don’t feel the urgency to pass our Anti-Lynching bill designating lynching as a federal hate crime– I urge you to pay attention,” he insisted.

Senator Bernie Sanders also claimed the attack on Smollett was proof of how evil our country is. “The racist and homophobic attack on Jussie Smollett is a horrific instance of the surging hostility toward minorities around the country,” Sanders said. “We must come together to eradicate all forms of bigotry and violence.”

Rep. Eric Swalwell also rushed to judgment. “What happened to Jussie Smollett is vile and tragic; thankfully, he will recover,” Swalwell tooted—err tweeted. “But hate crimes like this are happening more frequently, egged on by careless hate-filled rhetoric. We start reducing these crimes by rejecting the speech — neither can ever be accepted as normal.”

Senator Elizabeth Warren, no stranger to living a lie, also chimed in. “Racism, homophobia, & all forms of bigotry & hate have no place in this country,” she said. “The fight for equality isn’t over – no one should have to live in fear of being beaten on the street because of who they are.”

In addition to top Democrats, many in Hollywood fell over each other to virtue signal their anti-racism and anti-homophobia with tweets supporting Smollett and condemning hatred. These people refused to see the absurdity of his story and instead let it validate their negative attitudes about this country and Trump supporters.

It’s no mistake that those of us on the right saw through Smollett’s story, as did a jury of his peers, while the left fell for it hook, line, and sinker. The left always wants to believe the worst of this country and the worst of Trump and his supporters.