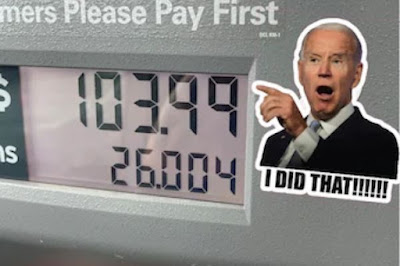 As the 2022 midterms approach the liberal establishment media is starting to get even more panicked than they have already been, as they see Democrats’ ratings tank, with Biden leading the way with new “lows” being reported on weekly, so the circling of the wagons continues to grow in an attempt to protect Joe Biden, from himself and his policies which has caused everything from massive gas price spikes to empty store shelves as the supply chain continues to crumble by the weight of Biden’s decisions.

ABC and NBC News highlights this as they are more concerned that the new COVID variant called Omicron (at least for this week) will hurt the Biden agenda, rather than the litany of issues from gas, food, supply chain, border, Russia, China, etc…… that are causing Americans to suffer.

Apparently to protect Joe Biden the MSM must convince their audiences to not believe their own eyes.

As will be seen in the video below, CNN’s Brian Stelter, while discussing combatting conservatives abilities to “meme” (an example of a meme is shown in the top image), he makes a point of claiming his “suburban” stores don’t have empty shelves, completely ignoring the recent images and eyewitness accounts about stores all across America that do show visual evidence of the supply chain issues the nation is facing.

“Disproving viral tweets is different than debunking a TV ad. Combating meme makers is different than rebutting newspaper columnists. And the memes are pretty powerful sometimes,” said Stelter. “My suburban grocery stores never had empty shelves like that.

“But the messaging here saying that Biden is to blame for anything bad about the economy. It is clearly sticking to some degree,” he continued.

Social media has taken to censoring memes with an increasing pace under the Biden administration. Most recently, the now widespread Let’s Go Brandon meme born from a mishearing at a NASCAR race has had rap video banned from Youtube for spreading “medical misinformation.”

The portion in bold caught my attention because Stelter is leading his readers to believe that the “messaging” from conservative memes is the reason Biden is being blamed, rather than acknowledging that Biden’s vaccine mandate, which he encouraged employers to implement even as the courts blocked “federal” implementation of them, for example, has caused people to walk away from jobs, be suspended for refusal to take the jab, all causing a trickle up effect of putting continued pressure on the supply chain to the point where it is broken in a way we may never recover from.

It was Biden that shut down the Keystone PipeLine, making America energy dependent after Trump accomplished energy independence for the first time in more than 70 years.

It was Biden that nominated a woman for a top banking regulatory position that was quoted as stating she wanted to see oil and coal companies “go bankrupt.”

A video of her discussing the idea of a National Investment Authority — a new government bureaucracy that would act directly in financial markets to allocate “both public and private capital” to fight social ills — has resurfaced in which she muses about oil and coal companies failing in order to fight climate change.

“A lot of the smaller players in that industry are going to, probably, go bankrupt in short order — at least, we want them to go bankrupt if we want to tackle climate change,” Omarova said as part of the Jain Family Institute’s “Social Wealth Seminar” series in March.

Because that would cause more job losses, she exposed her tyrannical tendencies by suggesting the National Capital Management Corporation should be “taking over management of those companies,” to force the changes Democrats want for “climate change.”

The 6.25 percentage point royalty rate increase on oil companies would contradict the administration’s promise to lower gasoline prices. In recent weeks, the Biden-Harris administration has asked OPEC to increase oil supplies and requested the Federal Trade Commission conduct an investigation into oil companies for “anticompetitive behavior.”

The rate increase, according to the New York Times, would generate about an extra “$2.5 billion in new revenue by the end of the decade,” which oil companies would pay to the federal government, though consumers would absorb the increased cost the companies incur. So far, the Biden-Harris administration has collected $1.6 billion more from oil leases in 2021 than in 2020.

The point here is that contrary to Stelter and other liberal media outlets claims, it is Biden’s own policies, decisions and appeasement to his radical liberal base that is causing much of the hardships Americans are facing, and if continued, will cause much more.