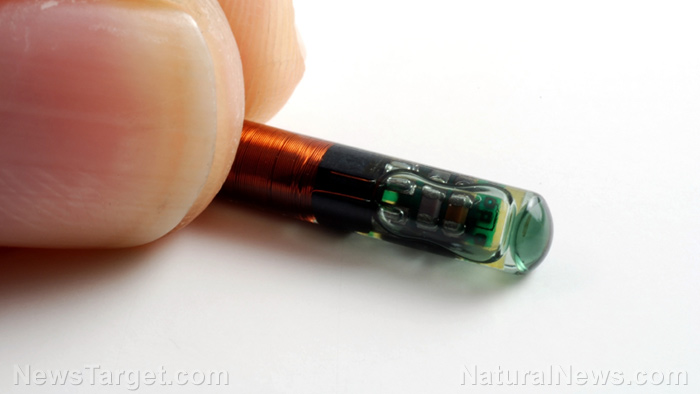 A Swedish company called Epicenter has developed a novel microchip technology that is now being implanted into people’s skin in order to track their Wuhan coronavirus (Covid-19) “vaccination” status.

While the Stockholm-based startup did not specifically develop the technology for this purpose, its “chief disruptor” Hannes Sjoblad says that the product, which is roughly the size of a grain of rice, was quickly and easily adapted to become a new type of “covid passport” that cannot be forged.

“Implants are a very versatile technology that can be used for many different things,” Sjoblad says about the chip. “Right now, it’s very convenient to have covid passports always accessible on your implant.”

The way it works is like this: A person gets the chip implanted in his hand (or forehead?). Near-field communication (NFC) devices are then used to scan the chip, detecting whether or not the person received his government-issued Fauci Flu shots.

Using this method, there is no need for a paper vaccine passport or anything else currently in use. All a person has to do is wave his implanted hand or scan his implanted forehead and voila: instant access to a sporting event or restaurant.

Revelation 13 warns about these implantable microchips

According to reports, some 6,000 Swedes already have the Epicenter chip inside their bodies. Because the chip can be programmed to also contain financial and other information, implanted Swedes are already using it to buy groceries, for instance, with the simple swipe of a hand.

The implications of this disturbing new technology echo back to the words of the Apostle John who in Revelation 13:15-17 told the following prophecy:

“The second beast was given power to give breath to the image of the first beast, so that the image could speak and cause all who refused to worship the image to be killed. It also forced all people, great and small, rich and poor, free and slave, to receive a mark on their right hands or on their foreheads, so that they could not buy or sell unless they had the mark, which is the name of the beast or the number of its name.”

“This calls for wisdom. Let the person who has insight calculate the number of the beast, for it is the number of a man. That number is 666.”

Epicenter is already talking about using its microchips to store all kinds of other information, too, including building access codes, bus passes and gym memberships. Soon, every kind of information about a person will be stored on his chip, doing away with cash, credit cards, paper medical records and other documents and information.

Everything about a person will eventually be stored on his or her implantable microchip, in other words – and just to be clear, only those people with a microchip will be allowed to participate in society.

“We are going down a very, very dangerous path,” warned one commenter at the Daily Wire. “One that will not be easy to reverse if we don’t stop it now.”

“We’re past that point,” responded another. “Things are going to get a lot worse.”

Another wrote that the Mark of the Beast will end up depriving people of medical care, employment, education, a driver’s license and even the “privilege” of simply leaving the house.