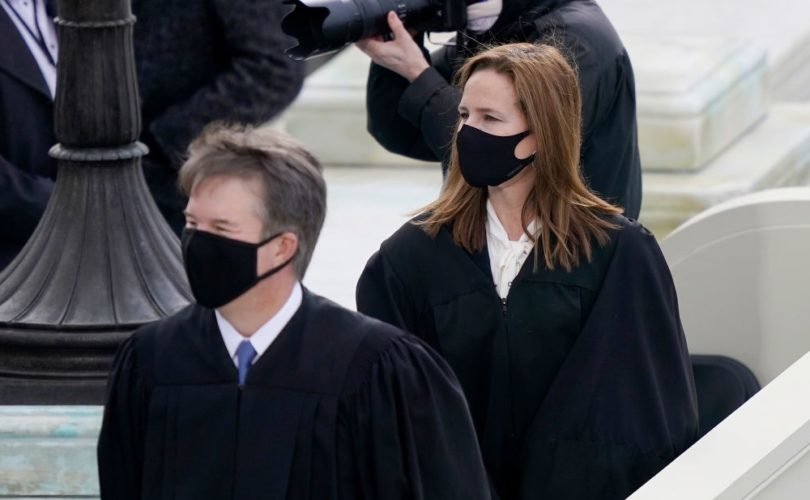 Health workers represented by the Thomas More Society argued that the mandate violated federal anti-discrimination laws by refusing to grant any religious exemptions to the order, as well as the Supremacy Clause of the U.S. Constitution, which holds that federal laws supersede state laws.

The nation’s highest court rejected a request to intervene Monday on a 6-3 vote, with only established conservative Justices Clarence Thomas and Samuel Alito and Trump-appointed Justice Neil Gorsuch voting to grant the application. None of the judges in the majority explained themselves, but Gorsuch took them to task in a lengthy dissenting opinion.

“In this case, no one seriously disputes that, absent relief, the applicants will suffer an irreparable injury,” Gorsuch wrote. “Not only does New York threaten to have them fired and strip them of unemployment benefits … The Free Exercise Clause protects not only the right to hold unpopular religious beliefs inwardly and secretly. It protects the right to live out those beliefs publicly in ‘the performance of (or abstention from) physical acts.’”

‘Today, we do not just fail the applicants. We fail ourselves,” he went on. “It is among our Nation’s proudest boasts that, ‘[i]f there is any fixed star in our constitutional constellation, it is that no official, high or petty, can prescribe what shall be orthodox in [matters of] religion’ … we should know the costs that come when this Court stands silent as majorities invade the constitutional rights of the unpopular and unorthodox.”