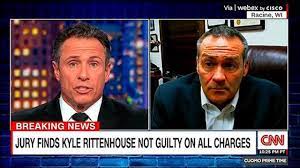 As you can imagine, everyone’s favorite establishment media hacks were in a bit of a tizzy on Friday night following the news that Kenosha teen Kyle Rittenhouse was found not guilty of all counts against him, including double homicide, after he shot three men during fiery riots last year.

CNN’s Chris Cuomo was most certainly among them, determined to continue to paint the young man as the reckless, irresponsible perpetrator of a crime over which he was only acquitted due to the color of his skin and Wisconsin laws that protect the right to self-defense.

This is why it probably wasn’t a great idea for his producers to land him an interview with Rittenhouse attorney Mark Richards.

While Cuomo clearly wanted to air his politicized grievances over the case, doing so while speaking with one of the men who just successfully argued that Rittenhouse was innocent was perhaps a poor choice.

Cuomo began the segment by discussing the defense’s choice to bring Rittenhouse on the stand to tell his side of the story, and then began to press him on whether or not the teenager regretted going to Kenosha on the fateful evening of Aug. 25, 2020.

“100 times over,” Richards replied, explaining that Rittenhouse has said to him that if he’d known what would happen, he never would have gone to Kenosha.

Much has been made over Rittenhouse’s presence in Kenosha that evening, since he was a resident of Illinois, but less attention has been paid on the part of Cuomo and his media cohorts that, as Richards would go on to explain, the teen had family and friends there, he worked in Kenosha — a short twenty-odd minute drive from his home — and he was asked there that evening to help protect a car dealership from damage.

Richards spoke to Kyle’s history as a police and fire department cadet and pointed to the fact that he had been cleaning up graffiti in Kenosha earlier in the day.

“He didn’t want to kill anyone,” the attorney said, “and he was left with a terrible choice and he exercised that choice, which was found to be lawful.”

Richards also explained that before the shooting, Kyle had helped administer first aid and went around trying to help people.

When Cuomo pressed him on whether Rittenhouse had considered if he should have “done something else” other than fire his weapon. This is a classic anti-gun argument: Rather than resort to using weapons, armed citizens should just unleash their inner Jet Li on their attackers.

Richards went on to explain that, the first time he’d met Rittenhouse, the teen had described Rosenbaum, the first man he shot and killed, as 6 foot tall and about 250 pounds, which turned out to have been larger than life.

This speaks to Rittenhouse’s mental state as he was being chased down the street by the belligerent Rosenbaum, who Richards noted, was quite literally daring the teenager to pull the trigger.

Rosenbaum had been released from the hospital earlier in the day after a suicide attempt and was reportedly not using medication for bipolar disorder. It was well-established during the trial he’d been behaving belligerently and, as confirmed by one of the state’s witnesses, dared other armed citizens to shoot him that evening.

To Rittenhouse, this crazed, fully grown man chasing him down the street was a threat, and it is absurd to suggest he could have resorted to somehow less violent means of defending himself against this threat.

As Richards explained, Rosenbaum “could have stopped at any time and none of this would have happened” and that we probably ought to consider his judgment in chasing Rittenhouse down and yelling “you’re not going to do s***, m*****f*****.”