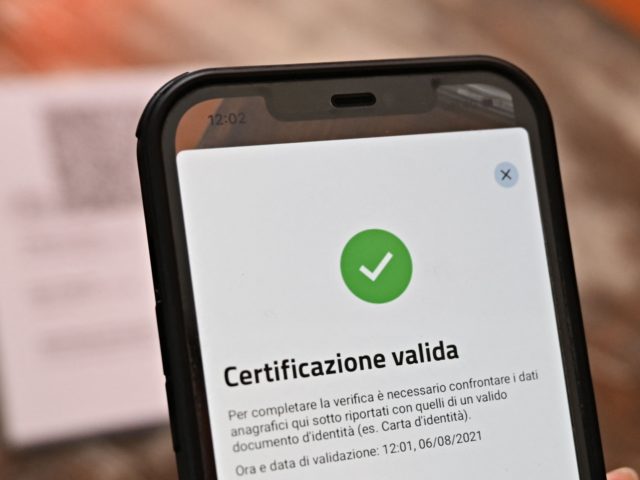 The Italian coalition government under Prime Minister Mario Draghi has approved a new decree restricting the activities of unvaccinated people and creating what has been called a “Super Green Pass”.

Italy’s current vaccine passport system, known as the Green Pass, is eligible for those who have taken a Wuhan coronavirus vaccine, have recovered from the Chinese virus, or have tested negative for Covid-19 within a certain timeframe.

But the new “Super Green Pass” will only be granted to those who are considered fully vaccinated and those recovered from the virus, a report from the Italian news agency ANSA stated, with the country’s council of ministers approving the degree on Wednesday.

Those with the Super Green Pass will be allowed to engage in various activities, such as indoor dining, sports, and other activities, while unvaccinated people would be barred, even in regions that are deemed low-risk, according to the country’s colour-code system.

If a region goes into the most severe colour code — red — then all people, regardless of vaccination status, will have restrictions imposed. That means that all non-essential shops will be closed and other non-essential services will be halted, much like they were before the introduction of the vaccine passport system.

Matteo Bassetti,  head of Infectious Diseases at the San Martino hospital in Genoa, commented on the new decree, telling newspaper Il Giornale: “This decision aims at two objectives: to make the places where the new measure will be applied safer and to encourage vaccinations. It’s a way to motivate people to immunise themselves.”

The newspaper notes that there have been several other changes in the Super Green Pass, including making the Super Green Pass only valid from December 6th to January 30th in low-risk zones, which will mean that only those with the pass will be able to stay in hotels during the holiday season, as well as enter bars and restaurants.

National-Conservative Brother of Italy (FdI) leader Giorgia Meloni, the head of the only major party in opposition to Draghi’s grand coalition government, slammed the new decree.

“Draghi and [Health Minister Roberto] Speranza admit that they were mocking Italians when they promised that using the government pass even to work would ensure freedom. They do not exclude the extension of the state of emergency, they still change the duration of the Green Pass without providing any scientific data, and there is no doubt about vaccination of children,” Meloni said on Facebook.