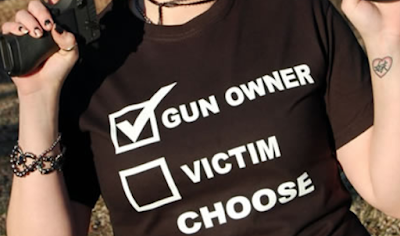 – The Media Tried Hard To Influence The Verdict….. And Failed

The liberal establishment media has once again showed America their true colors as we watch the continued unhinged reactions by media personalities and panels to the “not guilty” verdict of Kyle Rittenhouse, who shot three men, killing two, in self-defense as they were attacking him during the Kenosha, WI, riots in 2020.

During the trial, Americans that paid attention and ignored the media “spin” each day, learned a number of facts that were critical in the determination of a not guilty guilty verdict by a jury of his peers.

The image below lists much of the news the media didn’t report accurately and hid from the public before and during the trial of Rittenhouse in an attempt to convict the 18 year old in the court of the “media,” where the mod determines innocent or guilt, rather than a jury looking at evidence and law.

To this day, even after the trial where all of the aforementioned points became public knowledge, we still see liberals and the media (same difference, I know) repeating the same lies the MSM originally reported, because the media deliberately, let me repeat, DELIBERATELY, misled Americans in an attempt to demonize the right to self defense.

For example: Before the trial, the MSM had their audience believing that Rittenhouse had “crossed state lines” with a weapon, yet that proved untrue, yet in a perfect illustration of the media either continuing to push their lies knowing their followers will simply believe them without researching for themselves, or the MSM simply believes each others lies to the point where nothing that came out at trial penetrated their circle jerk.

The “cross state lines” meme the media manufactured was wrong on two counts: 1) Rittenhouse had family living in Kenosha and he himself lived there part of the time, and; 2) As mentioned the weapon was not carried across state lines.

Yet, the Washington Post, after the trial and verdict, still published a piece claiming Rittenhouse brought a gun across state lines, and was forced to issue a correction because it was an outright lie.

(ANP FUNDRAISER: Due to renewed censorship by ‘big tech’ upon ANP articles, we’ll be running a fundraising drive until we catch up on expenses. We also want to thank everybody who has donated to ANP over the years. With donations and ad revenue all that keep ANP online, if you’re able, please consider donating to ANP to help keep us in this fight for America‘s future at this absolutely critical time in US history. During a time of systematic, ‘big tech’ censorship and widespread institutional corruption, truth-seeking media and alternative views are crucial, and EVERY little bit helps more than you could know!) 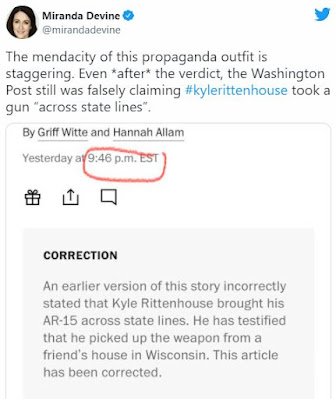 With a majority of Americans distrusting the media on political reporting, it is hard to offer Wapo, or other media outlets we will be discussing, the benefit of the doubt and call that a mistake, when we have watched the MSM the past decade become more activists than “journalists.”

A new Rasmussen survey finds that 53% of U.S. voters distrust the media’s political reporting – a ten-point jump from the 43% who distrusted the media four months ago, in July. Likewise, the percentage saying they do trust political news has dropped, from 37% to 33%. In the latest poll, 14% say they’re not sure, one way or the other.

Unaffiliated (62%) voters tend to side with Republicans (69%) in expressing distrust of the media regarding politics, though 32% of Democrats are also dubious of what they’re being fed in the news.

The problem for the MSM is that they have made almost everything “political,” including the right to self defense, which brings us to  disturbing conclusion.

The media, and by default, liberals, fully expected Americans and the jury in this case, to find that Rittenhouse should have just let himself get beaten, attempting to paint self-defense as “murder.”

Anyone that doubts that just needs to watch them claim that everyone takes a beating, so shooting a man trying to harm him, made Rittenhouse a cold blooded killer.

CNN’s Chris Cuomo argued that one of the men killed hadn’t killed anyone (ignoring that he was a convicted felon) and that he was just going to “beat” Rittenhouse up, therefore, Rittenhouse should have just taken the beating.

You cannot make this stuff up!

In that same segment, Cuomo made a statement that encapsulates the liberal mindset, when he said

Cuomo makes it very obvious he’s on a crusade against the right to self-defense as he recently rails against the Wisconsin law calling it “recklessly forgiving.” And telling his viewers to “step away from justice, of course, none it feels right. Because it was all wrong.”

That statement says so much and explains the “politics” of the media’s reporting on this case.

They don’t want juries to go by evidence, nor to follow the law. What they want is for their “feelings” to determine innocence or guilt, just as they convinced their audiences to do.

“Step away from justice” while discussing an actual court case, is peak liberalism in 2021.

No wonder the major shareholder in Discovery, which bought CNN, wants CNN to  “actually have journalists” like they used to and that the network itself “evolve back to the kind of journalism that it started with.”

“Fox News, in my opinion,  has followed an interesting trajectory of trying to have news news, I mean some actual journalism, embedded in a program schedule of all opinions,” Malone replied. “And I think they’ve been relatively successful with a service like Bret Baier, and Brit Hume before him, that try to distinguish news from opinion.”

“I would like to see CNN evolve back to the kind of journalism that it started with, and actually have journalists, which would be unique and refreshing,” he continued, which can only be viewed as a bad omen for the journalists currently under CNN’s employ.

Some are wondering who is on the chopping block, with online social media users offering their suggestions, as reported by Twitchy.

BOTTOM LINE – IT IS ALL ABOUT DISARMING AMERICA

Why did the media attempt to convict Rittenhouse in the court of public opinion, with misstatements, disinformation, outright fake news and all repeating the same narrative?

Democrats and their propaganda arm AKA the MSM, wanted Rittenhouse to be found guilty, and wanted desperately for the jury to reject self-defense, because then they could have used Rittenhouse as the poster boy for gun control.

They want to disarm Americans and any and every chance they get to demonize gun owners, or the use of a weapon in self-defense, they take advantage of and collude on a narrative to attempt to get the end result they want.

Media gun grabbers aren’t upset with the Rittenhouse verdict because they think the evidence should have convicted him, they are upset that they spent more than a year labeling him as a murderer, and failed to influence the jury and public opinion other than from other gun grabbers.

We will continue to see this play out at every opportunity.