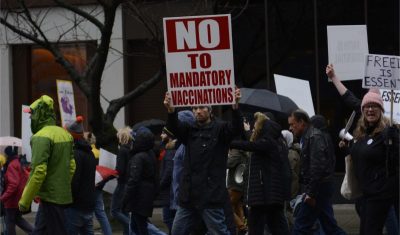 Recently, free media have been reporting more and more exemplary activities of civil disobedience. “Civil disobedience” is “non-violent self-defence” and a form of political struggle in the sense of Mahatma Gandhi and Martin Luther King.

It gives rise to hope among citizens to survive the worst crisis in modern history. With his motto “Dum spiro spero”, Cicero (106 to 43 BCE) expresses this hope and the anxious question of many citizens about “To Be or Not to Be” succinctly and prosaically.

The daily horror reports about state terror measures and the path already taken towards a new fascism leave deep traces of despair and hopelessness in young and old. Who still believes in protecting the health of the population?

However, the examples of civil disobedience somewhat mitigate this omnipresent horror. The full text of Cicero’s Wisdom of Life can still inspire the budding hope. In the original letter to his friend Atticus, he writes: “Dum spiro spero; dum spero amo; dum amo vivo.” That is, “As long as I breathe, I hope; as long as I hope, I love; as long as I love, I live.”

Australia’s Naval Base in Papua New Guinea: Power Play in the South Pacific against China

How a nation of 80 million was plunged into misfortune

Since every awake citizen feels the new measures of violence and terror first hand, I will not repeat them here. Instead, as a “post-born” person, I will reproduce what my two parents – born in 1913 and 1923 – told me as contemporary witnesses of German fascism and what I have read about it in post-war literature. Both have been indelibly “burned” into my memory. The parallels to today’s developments are striking.

My parents told me how the “Third Reich” came about: they told me about the street battles and talked about how the “Blockwarts” were installed, how freedom of expression was suppressed, the police instrumentalised and a “SA” and “SS” created. At the same time, people were flooded with misinformation. This was very perfidious because there were no lies or truths told – they were half-truths.

When people are inundated with such half-truths, my parents said, they can no longer distinguish between what is a lie and what is the truth. And it was through this agitation and propaganda of the “Third Reich” that a Hitler had come to power and an 80-million-strong nation had been plunged into disaster.

In this context, I would also like to mention two novels that made a great impression on me and confirmed what my parents told me: Oskar Maria Graf’s oppressive portrayal of the rising fascism in the German provinces in the novel “Unruhe um einen Friedfertigen” and Lions Feuchtwanger’s book “Erfolg” from the novel trilogy “Der Wartesaal”. These three works of German exile literature deal with the events between the wars of 1914 and 1939 in terms of content and report on the “re-emergence of barbarism in Germany and its temporary victory over reason” (Feuchtwanger).

Reports of actions of civil disobedience give rise to hope

Even in a second “Nuremberg Trial”, corrupt politicians will not be able to plead obedience to so-called “leaders” for crimes committed against humanity. With their behaviour, they have promoted and helped to realise the current policy. According to Hannah Arendt, the word “obedience” in adult politics is just another word for “consent” and “support”.

The answer to political decisions that increasingly restrict the individual and social lives of citizens, eradicate the love of freedom from human hearts, and forcibly lock people into an iron band of terror so that the space for action disappears, is not obedience but civil disobedience. While civil courage ranks at the top among democratic virtues, the willingness to engage in civil disobedience is suspected of disturbing the peace of law and undermining the foundations of liberal democracy.

But since the “silent” dictatorship of democracy has been “transformed” into an “open” dictatorship in many states, civil disobedience is the order of the day. And indeed, the free media are reporting ever more impressive examples of civil disobedience around the world, despite the fact that supervisors as well as workers from all professions are suffering temporary social and financial losses as a result of their actions.

For example, both chambers of the Florida legislature recently passed a law that also bans compulsory vaccination. Like the majority of US states, they are thus relying on reason and respect for civil and fundamental rights. In doing so, they are clearly acting against the administration of the US president.

Public figures accept their media “execution” and insist on their right to bodily integrity. More and more doctors are courageously refusing to vaccinate their patients against Covid-19 because of the many incalculable side effects and are being banned from practising. Formerly responsible directors of large pharmaceutical companies are leaving the company for ethical reasons and have since been educating the public.

Courageous citizens from all over the world are not impressed by announced repressions by governments and employers, claim their right to non-violent self-defence and take to the streets. This list of examples of civil disobedience could go on and on. Please, dear citizens, inform yourself in the free media. Every single example gives hope and will find imitators.

In the end, we can be curious to see which side will prevail in this undeclared war against civil societies and this unequal struggle – after all, it is about the existential question: “To Be or Not to Be”.