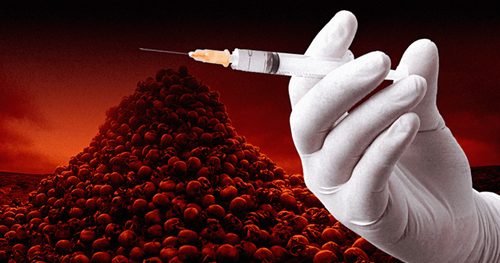 – His Final Warning: ‘Don’t Get Vaccinated Unless You’re Ready To Suffer And Die’

I woke up this morning, fully prepared to make a trip today to the doctors office for a checkup, though feeling a bit anxious because I know they’d all been ‘vaxxed’ there, and the word from the independent media is that ‘the vaxxed’ can become ‘superspreaders‘ of COVID due to their ability to carry a ‘high viral load’ of the manmade ‘China-virus’ as was reported in this Natural News story.

So while I was ready to bust out the ole Dodge Dakota and happily trudge through ‘the weather’ we had delivered to us this morning, about 2″ of fresh fallen snow, I didn’t expect the phone to ring at 8:30 a.m., with the caller id indicating the doctors office was on the line. That was the first surprise I’d get over the next few minutes.

Answering the phone, I was immediately met with the next surprise: “Mr. Stanford, Dr ‘so-and-so’ needs to cancel your appointment today as she is ‘still’ sick at home with COVID. But we’d like you to come into the office sometime this morning so that we can draw blood and take your vitals.”

Thinking to myself immediately, why would I ever want to go into an office where I know the Doctor I’m supposed to see is out with COVID, and the very real potential that the entire staff and office space was exposed to COVID as well, I politely refused that request to put myself in a position that I really didn’t want to be in, especially considering the newly revealed circumstances there.

And with that phone call also more confirmation that the fully vaxxed are still getting COVID despite having subjected themselves to the ‘globalists grand experiment‘, thus giving us more proof that the vaxxes are failing, all kinds of new information has come out over the last few days alone that shows the insane globalists want to ‘criminalize’ those reporting the truth about ‘vax failure‘, even as they’re slowly admitting that failure themselves.

Led by none other than globalist vax-pushers Bill Gates and Pfizer CEO Albert Bourla, who have both called reporting ‘conspiracy theories’ about the vax and mandates ‘criminal’, in the next section of this story below we’ll explore what recently happened to one man who believed his own doctor and the lies being pushed by Bourla, Gates and the mainstream media and ‘got the shot’ against his own best advice, regretting it right away, though he has a very important message for us we hope goes viral.

While Bill Gates in a recent interview (that you can see embedded as the 1st video at the bottom of this story) urged governments across the planet to ‘issue punishments’ to users of the internet who question mask and vax mandates, we know for a fact that Gates, nor anyone else, will be able to further punish one 56-year-old California man who took to the internet to condemn the COVID vax as a ‘killer’.

And while the name of that 56-year-old man, Mike Granata, an engineer, and longtime resident of Gilroy, California, is not a household name, nor would Gates ever bother to do any research on him, we see in this new story over at the RAIR Foundation why Mike Granata is now ‘untouchable’. For Mike Granata is no longer with us, having passed away on November 1st.

And very much unlike many who ‘move on‘, Mike Granata recently had the opportunity to write part of his own obituary, with the line that is being driven home by the independent media stated by Mike Granata that you can read at this RAIR Foundation story: ‘Don’t Get Vaccinated Unless You’re Ready to Suffer and Die’. From that heartbreaking story that the msm will never report.:

The 56-year-old engineer from California, Mike Granata, initially did not want to get the experimental mRNA injection. He was terrified that he would die. But, at the insistence of his doctor, he finally was jabbed.

On August 17, Mike received the Moderna vaccine, and three days later, he became ill. He developed multisystem inflammation syndrome and multisystem failure. Sadly, after ten weeks of suffering unbearable pain, medical professionals were unable to save him.

“My muscles disappeared as if to disintegrate. I was in ICU for several weeks and stabbed with needles up to 24 times a day for those several weeks while also receiving 6 or 7 IVs at the same time (continuously). It was constant torture that I cannot describe,” he wrote in his obituary.

“I was no longer treated as a human with feelings and a life. I was nothing more than a covid vaccine-human guinea pig, and the doctors were excited to participate in my fascinating progression unto death. If you want to know more, please ask my wife. I wished I would have never gotten vaccinated. If you are not vaccinated, don’t do it unless you are ready to suffer and die”, he continues.

Vows To Expose The Truth

“Many nurses and non-nursing staff begged me and my wife to get the truth out to the public about the Covid-19 vaccines because the truth of deaths from the vaccine was being hidden within the medical profession. I promised I would get the message out,” writes Mike, who passed away on November 1, 2021.

And as this November 9th story over at CNBC points out, Bill Gates isn’t the only globalist trying to ‘criminalize’ what we’re now seeing as ‘the truth’ about widespread vax failure, with Pfizer’s CEO Albert Bourla claiming people who ‘profit’ off of spreading online conspiracy theories about the vaxxes failing should be prosecuted as criminals. Meanwhile, the vaxxes they created keep on killing people.

With ANP warning well over a year ago that vaccines have a historical record of failing against human virus illnesses and diseases, as was reported in this National Institute of Health report published back in 2019, and more and more threats from governments across the world of ‘the unvaccinated having miserable lives’ in a future that reeks of Orwellian tyranny, what about all of these so-called ‘breakthrough cases’ of the vaxxed still getting COVID, like my own doctor? Anyone who puts up with any of this is putting up with and enabling tyranny.

So while the life story of people like Mike Granata will never be told by the mainstream media as it goes completely against their insane ‘vax everything that moves for eternity‘ agenda, for every ‘whack-job mad scientist’ pushing ‘the vax’ as ‘the cure’ insanity, there are doctors pushing truth.

So with Bill Gates, who isn’t even a medical doctor, wanting to criminalize anyone saying anything about why the vaxxes (and tyranny for that matter) are ‘bad’, we have other medical doctors, and even politicians, warning we’re witnessing nothing less than medical genocide and depopulation as heard in the final video below featuring mRNA vax inventor Dr. Robert Malone who joins Kristi Leigh to reveal the level of damage the vaccines are going to cause to our children and what it might take to wake people up to this danger. The video’s title: “Explosive! Dr. Robert Malone: They’re Rushing Into Killing Children”.

And with more and more signs continuing to emerge that everything now happening is being used to usher in the globalists ‘great reset‘ and ‘new world order‘ while being used to impose tyranny upon a still largely unsuspecting populace in places once free, many argue we’re witnessing nothing less than Western civilization under full scale attack and depopulation. Just crazy ‘conspiracy theories‘?