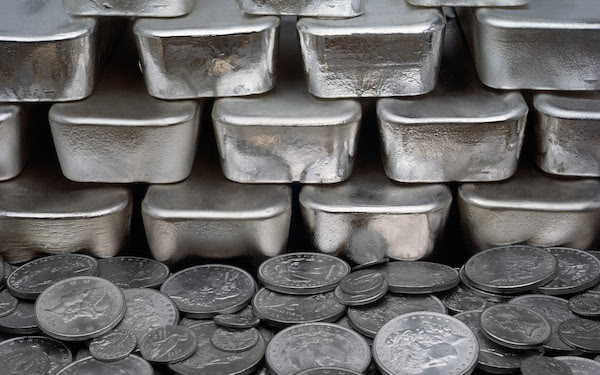 By now, many readers will have seen the popular American YouTube video by Mark Dice in which he stands on a city sidewalk and offers passers-by a free gift. They may choose between a 10-ounce silver bar or a large Hershey’s candy bar.

Each taker chooses the candy – most of them with no deliberation. The only taker who seems to hesitate at all soon decides on the candy, as “I don’t have any way to do anything with the silver.” (Behind them is a coin shop. Mister Dice offers to take the silver bar inside if she wishes, but she’s uninterested and takes the candy.)

(Editor’s Note: If you have not seen the video, please see below.)

Mister Dice doesn’t comment in the video as to what lesson might be learned from this, but an obvious one would be that Americans (or at least those who reside in his home town of San Diego, California) are prone to prefer instant gratification over something of substantially greater, but delayed value.

If this is his intent, he’s succeeded well in his light-hearted, but instructive video.

Since the 1950’s, much of the world has perceived Americans as being on “Easy Street,” and in recent decades, the U.S. government has fuelled American complacency through a consciousness of easy money and entitlement.

And so, Americans are often perceived by those outside the U.S. as being somewhat insulated, spoiled, naïve, and short-sighted. But, if this is true, Americans certainly aren’t alone. Much the same exists in Europe, Canada, and quite a few other countries that have, over recent decades, followed the American socio-economic model.

Trouble is, all that easy money and entitlement exists only as long as a source for the “freebies” exists. Unfortunately, the idea that freebies are free is inaccurate. Freebies of any description must be paid for by someone.

In business, freebies are sometimes provided as “loss-leaders” to attract more business. They therefore become a line item on the monthly balance sheet, a cost-of-doing-business expense. The business hopes to make the loss back through sales generated by the loss-leader.

But, of course, borrowing, too, eventually reaches the point that it has become so great that it cannot be repaid. What then?

Invariably, economic collapse is the outcome. But, why should this be so? Well, when the tipping point is reached (as in jurisdictions like the EU and U.S., where more than 50% of the public are net recipients and the other 50% must pay for both themselves and the other 50%), there’s no turning back. Those who have been receiving the candy have been told that they’re entitled to it and now they believe it. They will not tolerate the suggestion that the freebies must end, even though no further tax can be reasonably levied; no further funds can be borrowed. Therefore, in every case, the result is systemic collapse, not a gradual tapering off.

For thousands of years, governments have sought to appease people with freebies. In ancient Rome, a dole of grain and free entertainment (bread and circuses) helped to usher in the decline of the empire. Like all great empires, it collapsed under a weight of debt and mismanagement.

Much of the world is presently at this tipping point. Governments continue to promise benefits that they know will soon come to an end. If history repeats, they will continue repeating this promise right up until the day when the candy stops being dished out.

They will then say that no one could have seen this coming.

Amongst the public who will be the victims, there will be three general groups. First will be the Takers, those who have been the recipients who depended upon the freebies the most. They will be the hardest hit, as not only will they lose the freebies, they will have neither the skills nor the imagination to become self-reliant overnight.

The second group will be the Payers, those whose tax dollars paid for the freebies. They will be hard hit, as the system in which they live and operate has broken down, although they will fare better than the Takers. They will have the skills and imagination to rebuild their lives (having previously been productive enough to pay for themselves and others.)

Third will be the Preparers, those who envisioned the inevitability of the collapse of the system. They most certainly will have the skills and imagination to rebuild their lives, but, additionally, they’ll have the means with which to rebuild quickly. They will be the very few who chose the silver bar over the candy and had the wisdom to store the silver in a jurisdiction where it was not likely to be appropriated by a dying empire.

Much of the world is now running out of candy. The latest version of Bread and Circuses is reaching its inevitable end.

Replaying the video, we observe Mister Dice offering chocolate or silver. Each Taker looks at him incredulously, then makes the obvious choice, the candy. Each of them gives him a smile. Each is pleased to walk away with the chocolate, but, likely as not, each will have consumed the bar before the day is out and the benefit of the freebie will be short-lived.

After giving out eight bars, Mister Dice is all out of chocolate and he presumably goes home. He has no candy, but he does have 10 ounces of silver. Perhaps he owns other silver bars as well, stored in a safer jurisdiction.

Each of us has the opportunity to make a choice as to whether we wish to be Takers, Payers, or Preparers. The choice we make may define our future.

Editor’s Note: The U.S. government’s bad financial decisions and massive debt levels will cause another financial crisis sooner rather than later.

Like most governments that get into financial trouble, we think American politicians will keep choosing the easy option…money printing on a massive scale.