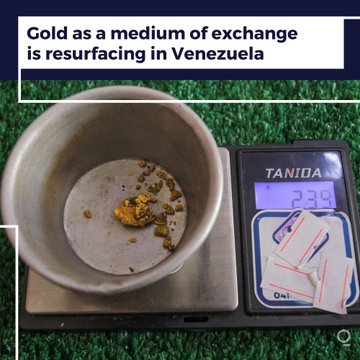 With inflation surging worldwide in everything from the prices of energy to raw materials to consumer goods, there is growing acceptance (except from central bankers) that this inflationary trend is not only not transitory, but given the backdrop of accelerated global money printing and fiat currency debasement, that it could be hyperinflationary.

It is therefore helpful to look at the example of one economy which has already entered hyperinflation and which is still in the midst of hyperinflation, that economy being Venezuela.

A Loss of Trust

As per all central banks in historical periods of hyperinflation, the Venezuelan central bank has used cosmetic tricks to rebase it’s worthless fiat currency, most recently knocking six zeros off the national currency unit, the Bolivar, by launching new redenominated notes into circulation on 1 October 2021. This follows a similar exercise in August 2018 which at the time knocked five zeros off the previous version of the Bolivar.

But none of this rebasing and tinkering with banknotes fools the Venezuelans. Because in this environment of rocketing prices amid the evaporating purchasing power of the worthless Bolivar, the confidence of Venezuela’s population in the national currency has collapsed, i.e. the population has totally lost trust.

Venezuelans have lost trust in the Bolivar not just as a store of value, but as a medium of exchange, and even as a unit of account. And what happens when a population loses trust in a fiat currency? Well, they stop using the national fiat currency, as much as they can, and they find monetary alternatives. And that is exactly what has happened in Venezuela. And not surprisingly, one of the alternatives Venezuelans have turned to is physical gold.

Gold in Times of Crisis

BullionStar highlighted this trend of Venezuelans turning to gold as money in an article two years ago titled “The Power of Gold in Times of Crisis”, which covered crisis times in a number of countries including Venezuela.

That article showed that across many areas of Venezuela, physical gold had replaced paper currencies “as a means of payment, as a form of barter to acquire goods and services, and in some cases literally for day-to-day survival.”

This included mobilisation of gold in Venezuela’s capital Caracas, as well as in the western states of Táchira, Zulia, and Trujill near the Columbian border, and also in a south-eastern state, which like the Venezuelan currency, is named Bolívar, but which ironically is Venezuela’s gold mining region as the state of Bolívar is home to the mineral rich Arco Minero del Orinoco (Orinoco Mining Arc).

Bolívar – But not the banknotes

The Orinoco Mining Arc covers an area of 111,800 sq kilometers and is divided into four blocks, one of which (to the east of the arc) is estimated to contain a massive 7000 tonnes of gold. Which is precisely why this area of Bolívar contains many gold mines, a lot of which are illegal, and most of which are now controlled by the Venezuelan military or various non-state factions and armed gangs. These military and gangs also control the gold traders which purchase from the mines as well as the shipping routes of gold out of the country, to countries such as Columbia and Brazil.

In a Venezuela shattered by economic collapse and poverty , the lure of the riches of Bolívar’s gold mines has also pulled in thousands and thousands of Venezuelans from all over the country to work the mines and who generally are paid in gold nuggets.

It is here in the Venezuelan state of Bolivar where gold as money has come to the fore, because perhaps more than in any other of Venezuela’s 23 states, the local population in Bolívar has the means (lots of gold in circulation) as well as the motive (hyperinflation and national fiat currency collapse) to use gold as not just a store of value, but as a medium of exchange and a unit of account.

The state of Bolivar lies of the south-east of Venezuela’s capital, Caracas. Ciudad Bolívar is the state capital of Bolivar while Ciudad Guayana on the south bank of the Orinoco river (which includes the town of Puerto Ordaz) is the state’s largest city. Further to the south-east are the towns of Guasipati, El Callao and Tumeremo in the heart of the gold mining areas and there is even a historical gold mining town named El Dorado.

In the BullionStar “Gold in Times of Crisis” from November 2019, we drew attention to the gold transactions in the state of Bolivar, and wrote that:

“Across in the east of Venezuela in the industrial centres of Puerto Ordaz and Guayana City, which is the gateway to the Arco Minero del Orinoco gold mining area, the entire economy has now switched to gold as the illegal artisanal gold mines in the region flourish and trust in the Venezuelan bolivar has vanished.

Here property buyers now pay estate agents in gold, and even the local university in Puerto Ordaz accepts gold for course payments. Gold is also the medium of exchange further south-east in the El Callao area near the illegal gold mines, and those who hold gold can trade it for cars or in fact any item, and if they want to legalise the transaction at a notary public, they register the payment in bolivars.”

Gold as the Money of Choice

Fast forward two years to 2021, and the role of gold as money in some parts of the state of Bolívar has become even more widespread and critical to everyday existence.