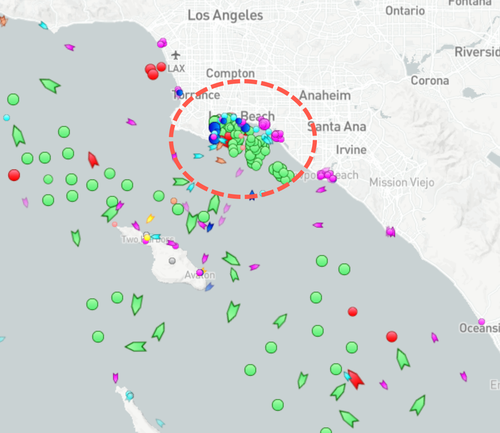 The Biden administration could be at the point where they might want to consider calling in the National Guard, or at least via a proxy, having governors deploy Guardsmen to address the mounting supply chain crisis at ports. President Biden’s directive last month to stomp out logjams at Southern California ports is failing miserably as a record number of container ships are now anchored offshore.

According to a tweet from Marine Exchange, 111 container ships are anchored outside the ports of Los Angeles and Long Beach, a new record high. This breaks the prior record of 108 on Oct. 21.

A traffic jam of vessels of the twin ports.

The ugly truth is that congestion at the twin ports, responsible for 40% of all shipping containers entering the U.S., cannot be solved overnight with Biden’s 24/7 port directive. It’s beginning to look like the directive was nothing more than a political ploy to push the infrastructure bill.

Biden is in ‘deep ship,’ and his administration knows it. They’ve been searching for other ideas to alleviate port congestion. One has been weighing the use of the National Guard. That could be the next step as congestion continues to mount and millions of gifts might not make it under the Christmas tree this holiday season.

Recent data published by trade magazine American Shipper shows containers at the twin ports have risen to 60,000 that have been dockside for more than nine days. A combination of warehouses, trucking, and labor issues are making things worse for ports that have increased wait times for vessels.

The size of the logjam is unprecedented. Importers from Apple to Costco warned about port congestion in their third-quarter earnings calls. S&P 500 executives said “supply chain” and other related terms about 3,000 times on earnings calls this year. In October, the number of times “supply chain” was mentioned in Bloomberg articles hit a record high.