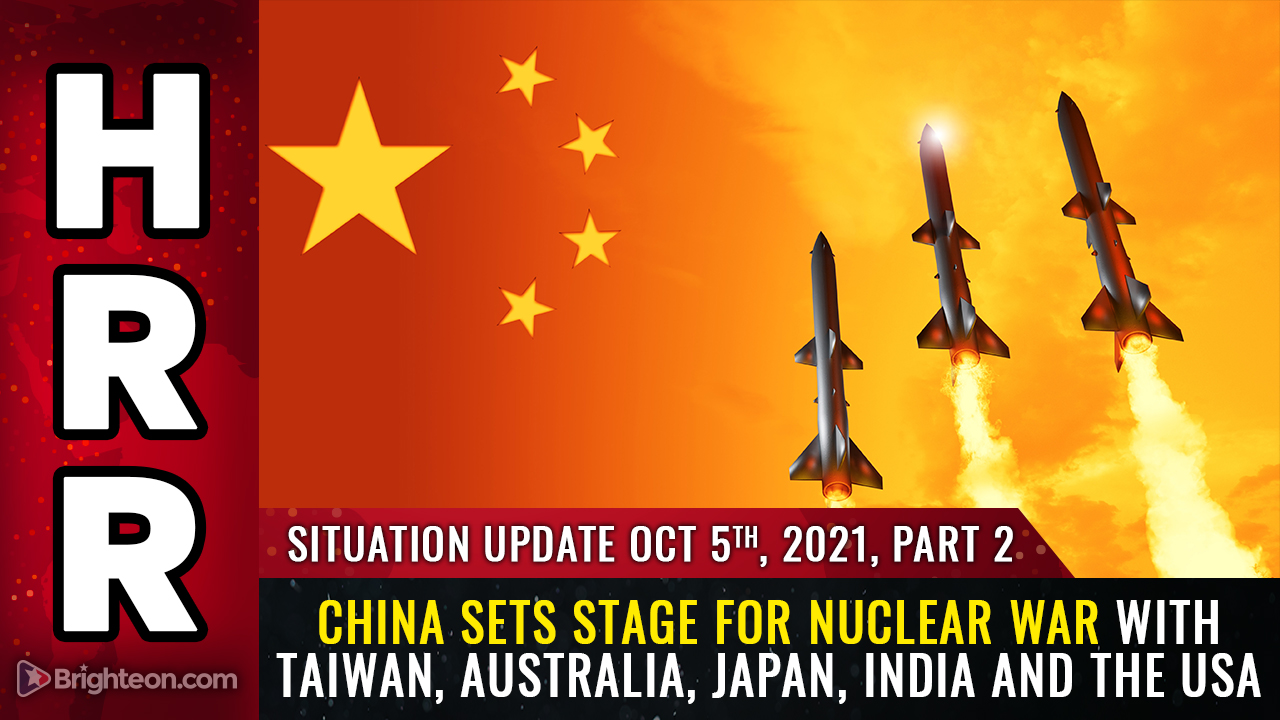 Today’s Situation Update podcast (see below) is a whirlwind tour of the geopolitical issues now coalescing into what may become a nuclear war originating with communist China.

That war, which appears to be growing closer each day with China’s calculated provocations, would ensnare not just the USA and Taiwan but also Australia, India and Japan.

Alarmingly, both China and the United States have a strong incentive to initiate global warfare in order to distract from their own failed economic and political policies. China’s property developer debt bomb is imploding, with now two additional property developers (beyond Evergrande) failing to make bond payments. As CNBC reports, Fantasia Holdings has missed a $206 million bond payment and its shares have halted trading. This is the third property developer to start imploding in China, and there’s almost certainly much more yet to come.

China can’t currently keep its own power grid functioning, either, leading to a shut down of significant manufacturing capacity. The U.S., meanwhile, can’t keep its own bloated government running without printing trillions of dollars each month. It’s as if both nations are run by financial arsonists who are in a competition to see who can burn down their own country first.

The leadership of both China and the USA desperately need a war right now, and China is provoking it by flying 50+ warplanes into Taiwan’s sovereign airspace. Because the U.S. needs to defend Taiwan and keep it as a strategic partner that’s geographically close to China, America will be forced to defend Taiwan against China’s aggression (yes, even under Biden). This can easily escalate into a shooting war — or even a nuclear war — which would very quickly evoke responses from India, Australia and Japan, three nations whose very existence is seriously threatened by China’s expansionist ambitions.

While processing all this, keep in mind that China already launched a weapon of mass destruction against America (the covid bioweapon), and America reserves the right to retaliate against China using nuclear weapons, including small battlefield tactical nukes. Anticipating this, China is likely to attempt an EMP attack on the continental United States, combined with a cyber warfare attack to cripple America’s power grid. America’s response against China would almost certainly include the use of secret orbital weapons platforms, weather weapons and possible even strikes targeting the highly vulnerable Three Gorges Dam. If the dam collapses, the CCP falls into ruin. (China’s domestic food supply is already rapidly failing, and if the dam fails, it will wipe out a huge swath of farmland…)

Should any of this escalate, the startling reality is that China’s exports to the USA would grind to an instant halt, cutting off America from China’s rare minerals, microchip supply lines, consumer goods, spare parts, food ingredients, pharmaceuticals and so on. In essence, America would suffer tremendously under a collapse of the sino-American supply chain. It’s not even clear whether America could keep its own power grid operating under such circumstances, since power grid components need spare parts. And most of those parts come from China.

Accelerating all this is the fact that the lies about covid’s origins continue to unravel by the day. The cover story has fallen, and the world now knows the truth that China conspired with treasonous U.S. “officials” (such as Fauci) to build a biological weapon of war and release it on the world to take down America (and get rid of Trump). These revelations are backing China into a corner where it will be forced to provoke international war to avoid being held responsible for the entire global plandemic.

Wars can be avoided if nations choose to avert them, but in this case, we are stuck with nations overtly working toward global warfare as a way to cover their own crimes and failures. The only thing more dangerous than a big government trying to “do good” is a big government trying to do bad. And that’s where we are in the world now, like it or not.

Today’s Situation Update provides a full, detailed analysis of the many factors now at play. Prepare to be cut off from China in the very near future. Prepare for total collapse of global supply chains. And prepare to be dragged into a global war that’s actually waged as a form of complex theater to distract you from the criminality of your own failed, criminal government.

Discover a new podcast (plus new interviews) each day at: