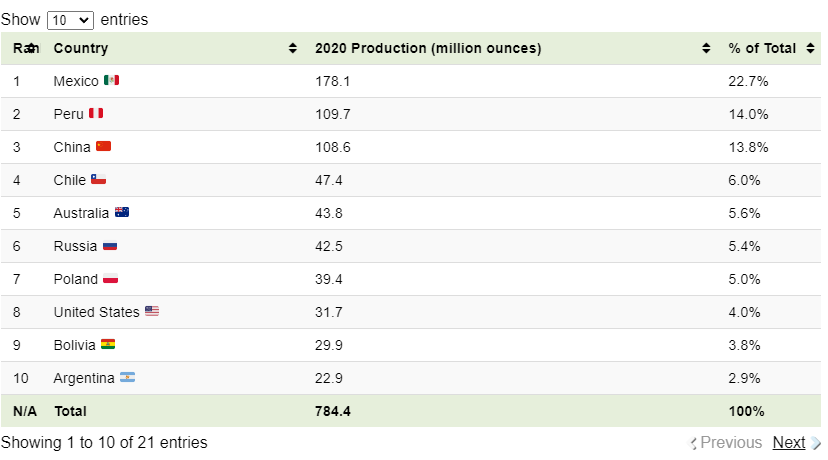 Although silver is widely known as a precious metal, its industrial uses accounted for more than 50% of silver demand in 2020.

From jewelry to electronics, various industries utilize silver’s high conductivity, aesthetic appeal, and other properties in different ways. With the adoption of electric vehicles, 5G networks, and solar panels, the world is embracing more technologies that rely on silver.

But behind all this silver are the companies that mine and refine the precious metal before it reaches other industries.

The above infographic from Blackrock Silver outlines silver’s global supply chain and brings the future of silver supply into the spotlight.

The Top 20 Countries for Silver Mining

Although silver miners operate in many countries across the globe, the majority of silver comes from a few regions.

Mexico, Peru, and China—the top three producers—combined for just over 50% of global silver production in 2020. South and Central American countries, including Mexico and Peru, produced around 390 million ounces—roughly half of the 784 million ounces mined globally.

Poland is one of only three European countries in the mix. More than 99% of Poland’s silver comes from the KGHM Polska Miedź Mine, the world’s largest silver mining operation.

While silver’s supply chain spans all four hemispheres, concentrated production in a few countries puts it at risk of disruptions.

The Sustainability of Silver’s Supply Chain

The mining industry can often be subject to political crossfire in jurisdictions that aren’t safe or politically stable. Mexico, Chile, and Peru—three of the top five silver-producing nations—have the highest number of mining conflicts in Latin America.

Alongside production in politically unstable jurisdictions, the lack of silver-primary mines reinforces the need for a sustainable silver supply chain. According to the World Silver Survey, only 27% of silver comes from silver-primary mines. The other 73% is a by-product of mining for other metals like copper, zinc, gold, and others.

As the industrial demand for silver rises, primary sources of silver in stable jurisdictions will become more valuable—and Nevada is one such jurisdiction.

Nevada, known as the Silver State, was once the pinnacle of silver mining in the United States.

The discovery of the Comstock Lode in 1859, one of America’s richest silver deposits, spurred a silver rush in Nevada. But after the Comstock Lode mines began declining around 1874, it was the Tonopah district that brought Nevada’s silver production back to life.