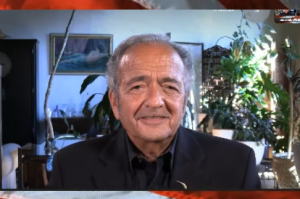 Gerald Celente, a renowned trends researcher, is back this time to talk about the unrelenting full blown “Vax Wars” he predicted many months ago.  Many people are being told “no vax, no job,” and now it’s really heating up.  Celente explains, “The fight is on.  The people that are not going to get it are not going to get it.  They’re done.  The fight is on.  From the very beginning, I said about the ‘Covid War,’ it’s going to be anti-vax, anti-establishment, anti-immigration parties forming.  This is the beginning of a new populous movement like we have never seen before.  It is just the beginning.  Remember, ‘it does not take a majority to prevail, but an irate tireless minority keen on setting brushfires of freedom in the hearts and minds of men,’ said Samuel Adams. . . . ‘Vax Wars,’ this is bigger than the Vax Wars.  This is a war about freedom, and it’s going to rage around the world.  Look what happened in Italy last week.  Looks what’s going on in France.  In the United States, it’s going to happen as well.  This is the beginning of a civil war.  There are going to be states seceding from the Union, and they are going to push for it.  What they are doing is totally unconstitutional, un-American and un-Godly.”  (as in God the Father.)

All of the unions that usually support Democrats are up in arms about the coerced vax mandates.  Is the DNC going to lose a huge segment of its base?  Celente says, “Yes, they are.  They are not the Democrat Party.  They are not the Republican Party.  It’s a crime syndicate.  These are criminals.  They are murderers and thieves.  How much more proof does anybody need. . . . Yes, the unions are going to run from the Democrat Party.  There are going to be new forming parties.  I say by their deeds you shall know them.  Hey, you are too big to fail.  The banksters, the Federal Reserve pumping in $29 trillion (in 2008 and 2009 to bail out their buddies.) . . . .They are murderers and thieves, and we are going to have a new political movement.  You know what’s going to have to be behind this movement?  Self-sustainability, it has to be a self-sustaining U.S. without supply chain backups.  Why are we buying all that crap from China? . . . Why aren’t we making things in the United States?  Because lowlife Democrat and Republican pieces of crap sold us out to get the products made overseas so they could mark up the prices when they brought them back.”

On the economic front, Celente says the trend is inflation and a coming collapse.  What going to set that off?  Celente says, “When they raise interest rates, this thing goes down — end of story.  If they can’t put that monetary methadone out there for the money junkies for free anymore, this thing goes down.  Inflation is going to make them raise rates.  It’s going to make them start tapering.  This is not a capitalist society, it’s fascist.  They are buying $120 billion a month of government and corporate bonds.  They are buying corporate bonds?  Oh yeah, and junk bonds too. . . . That is a merger of state and corporate powers.  That’s what Mussolini called fascism.”

Celente says this is going to end badly, and he’s talking about “the greatest financial crash in history.”  The little guy, meaning “We the People,” should prepare, and time to do that is running short.  Celente says, “Prepare for the worst.  If the worst doesn’t happen and you are prepared, you lose nothing.  If the worst happens and you are not prepared, be prepared to lose everything.  We are in a place that no one could have invented in early January 2020.  You could not make this story up. . .  My biggest fear is they take us to war.”