The globalists have made a course correction dating back almost 10 years. The globalists, for populist related reasons previously covered on the CSS, have decided that humanity will ultimately be ungovernable and stronger action is needed. This course correction is reflected in the following statement by Zbignew Brzezinski:

Presently, there are over 40 major protests and acts of defiance with regard to the jab mandates and the related vaccine passports. Nearly half of the first responders, nurses, doctors, teachers and 33% of the military are standing up in defiance. Institutions such as the Yavapai County Regional Medical Center and Banner Health, Arizona’s largest employers, have delayed mandate deadlines because of the massive refusal of their professional in terms of accepting Biden’s mandate.

Extreme gun violence is listed as the primary reason why the UN will be needed. This may be the one truthful aspect of this planned UN occupation of an American city.  The UN will claim they are merely here to help with whatever manufactured crisis will exist. However,, the UN is going after the guns of all Americans and on this point, history has spoken. Gun confiscation is always followed by genocide. Below is an image of a United Nations document regarding gun confiscation. The full text follows the printed image. 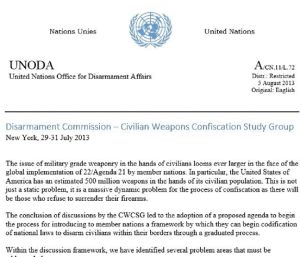 “The issue of military grade weaponry in the hands of civilians looms ever larger in the face of the global implementation of 22/Agenda 21 by member nations. In particular, the United States of America has an estimated 500 million weapons in the hands of its civilian population. This is not just a static problem, it is a massive dynamic problem for the process of confiscation as there will be those who refuse to surrender their firearms. “The conclusion of discussions by the CWCSG led to the adoption of a proposed agenda to begin the process for introducing to member nations a framework by which they can begin codification of national laws to disarm civilians within their borders through a graduated process. “Within the discussion framework, we have identified several problem areas that must be addressed, they are:

“1. Classification of military grade weapons to be made illegal for possession.

“2. Creation of programs to provide reasonable compensation for voluntary surrender of said arms.

“3. Codification of laws to begin the restricting and strict licensing of concealable firearms.

“4. Codification of laws to begin the restricting and strict licensing of hunting grade firearms.

“5. Codification of laws to restrict the sale of, and possession of ammunition and components to manufacture ammunition.

“6. Finally, codification of laws to completely makes (sic) any and all firearms illegal to own, possess or use outside of military and law enforcement usage.

“7. Creation of a United Nations Police Taskforce with the specific mission of assisting member nations with the collection of weaponry from civilian hands. “The CWCSG will submit its findings and final recommendations once we have created the codification framework for member nations for a full review by the Office of the Secretary General.”

If one examines the first five steps of the plot, it is easy to ascertain the pattern of gun confiscation that the UN willl attempt to follow. I do not believe that the UN has to completely implement steps 1-5 before moving to enforce steps 6 and 7. Therefore, even though the UN has not completely implemented the first five steps across the country, they have done enough to usher in Steps 6 and 7 in this United Nations disarmament plan. Steps 6 and 7 are listed below:

“6. Finally, codification of laws to completely makes any and all firearms illegal to own, possess or use outside of military and law enforcement usage.

7. Creation of a United Nations Police Taskforce with the specific mission of assisting member nations with the collection of weaponry from civilian hands”.

The provisions were recently updated and they were detailed by Rand Paul and the Gun Owners of America:

*** Mandated national “screening” for those seeking to own guns, giving bureaucrats the final say on whether or not you’re “competent” enough to own a firearm;

*** Restrictive licensing for gun and ammo sales, and even bans on certain types of firearms. This could include anything from semi-auto rifles to shotguns and handguns;

*** Restrictions on the number of guns and amount of ammo any “properly-licensed” individual may legally own;

*** Bans on magazines holding more than ten rounds; and

*** Bans on owning a firearm for self-defense — unless you jump through the endless bureaucrat hurdles.

The radical Left knows that they are not going to be able to seize all the guns and an outright and immediate gun confiscation process would defeat their efforts because Americans would likely resist. However, they are serious chipping away at gun ownership and this has been the plan for a long time. What is their end game?

Connecting the Dots for Gun Confiscation

Even if the the UN document designed to disarm America, listed above, was not genuine (and it is), the following, very public document has been proven to be very authentic. Under the heading, “Hiding in plain sight”, the United Nations has been advertising for the following position for the past several years: