But in the wider context inflationary conditions being described as stagflation are not stagflation at all. They are the consequences of increased money supply undermining the purchasing power of currencies —an extremely dangerous economic condition that, unless it is fully checked, leads to the destruction of a fiat currency.

In the UK and elsewhere politicians are claiming that higher wages for the low paid are needed to get them back to work. Without an increase in productivity, it amounts to a recommendation in favour of stagflation. But in measuring stagnating production, politicians and economists alike are being misled by estimates of individual productivity by the OECD, which produces the basic statistics.

This article demonstrates the incorrect assumptions behind the OECD’s calculations on productivity and why it is not the function of governments to attempt to manage it. If governments are to do anything positive, it should be to cut employment taxes and stop interfering.

The reader less interested in the abuse of labour and production statistics might like to skip the section on the OECD’s approach to productivity for the brief update on the wider evolution of global hyperinflation later in the article.

As the global economy descends into a hyperinflationary collapse, commentators who have yet to fully understand the dynamics of it are now becoming aware that price inflation looks like being rather sticky and far removed from Jay Powell’s hopeful description of transient.

Still on the back foot, these rear-view mirror policy drivers are beginning to see it as evidence of stagflation. It is a condition which neo-Keynesians find contradictory, taken to describe a combination of inflation and a stagnating economy. But this takes the word out of its original context. I should know, because it was first used by Iain Macleod when he was a Member of Parliament and shadow chancellor in the Conservative opposition on 17 November 1965. Iain happened to be my father’s elder brother, so was he was my uncle.

The following is an extract from Iain’s speech in the Commons that day.[i] I extract as much as I do to give it its proper context:

“We now have the biggest gap between productivity and earnings of any time in modern economic history. Certainly, history was being made. The index figure of industrial production at 133 for January—revised on the latest figures to, I think, 134; and for December it is down to 131—is certainly history. I can find no period—and I have checked this all the way back, with the possible exception of 1952—when in 13 years there was a year when the gap was so wide between what we should be doing, and we were in fact doing.

“We now have the worst of both worlds —not just inflation on the one side or stagnation on the other, but both of them together. We have a sort of “stagflation” situation and history in modern terms is indeed being made. There is another point behind the figures. As I say, production has fallen by 1 per cent. or ½ per cent. while incomes have gone up, perhaps, by 8 per cent. This can result only in two things happening in the months ahead; either a considerable increase in our import bill to meet the increased consumer expenditure or a very real rise in our prices.”

So, there we have it. The reference was specifically about the combination of stagnating production and wage inflation. This is the condition that is, ironically, today being promoted by the Conservative government, led by Boris Johnson lauding higher wages without the immediate production to match. That’s just a vague hope for the future. There really is no difference between the government sanctioning higher wages in the predominantly nationalised industries without improved productivity in 1965 and the wages situation today. The language only is changed. Boris is chasing a mirage of economic transformation with industry somehow managing to accommodate higher wages and remain in business.

It was not, as is commonly supposed, a wider description for an economy which is stalling while consumer prices are rising. But to many observers that is what stagflation has become. It is now a portmanteau word for a portmanteau situation — the latter being an inadequate description for the consequences of earlier monetary stimulation. It is a half-way house on the road to discovering the true hyperinflationary threat faced by us all on a global scale, if as seems likely democratic governments have become so addicted to unfunded expenditure that they cannot stop relying on it.

Stagflation is commonly associated with the 1970s. But as we have seen, it was applied to an earlier condition a whole credit cycle before price inflation threatened to escalate from 1972 onwards.

Another aspect was the different monetary situation, best illustrated with American statistics. Bank credit in the US expanded in the 1970s more rapidly than in 2010—2021, but since the financialisation of the economy this comparison is rendered useless due to the development of shadow banking, which in terms of credit creation cannot be defined statistically. A better indicator is the Fed’s base money, and Figure 1 shows how base money has grown since 2005, compared with its growth between 1965—1981. 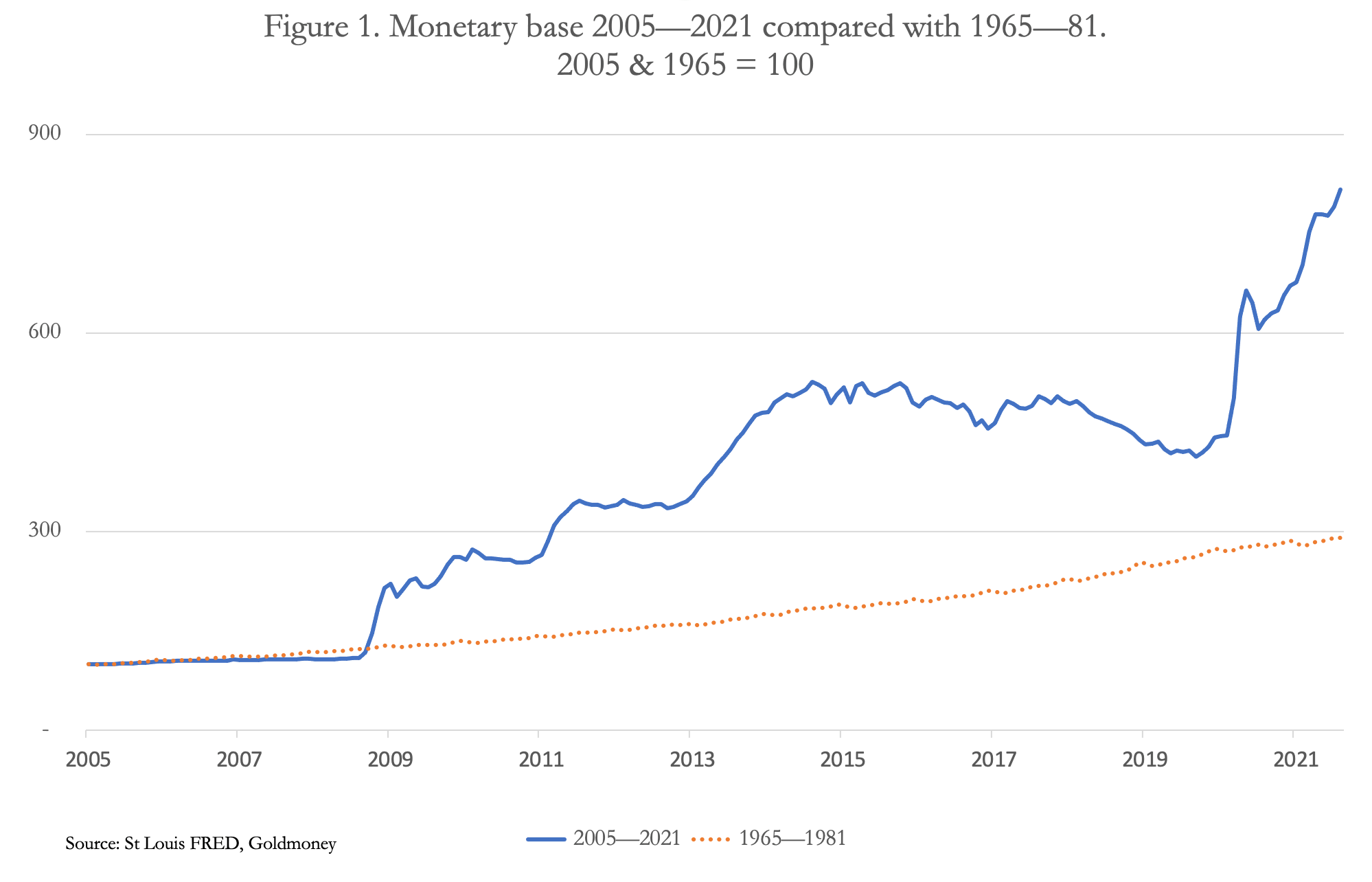 From 1965—1981, US base money grew 191%, while from 2005 to date it has grown 716%. On its own, the massive increase in base money does not trigger a hyperinflation of prices: that is down to changing public perceptions of the purchasing power of the currency they use for day-to-day transactions. But members of the public are more likely to appreciate a link between measures of narrow money, such as a central bank’s base, than a link with bank credit, particularly when you bear in mind that even financially educated investors don’t understand how bank credit is created and what the effects are likely to be.

Suffice it to say, that in the history of banking and deposit creation a cycle of bank credit expansion and its subsequent contraction is identifiable and can be explained. And the empirical evidence is that the cycle of bank credit has less of an impact on prices over its boom-and-bust duration than increases in base money.

That being the case, we can assume that a comparison between the prospects for a loss of purchasing power for currencies today with the situation when so-called stagflation ruled in the 1970s is misleading. Today, the conditions exist for what economic historians describe as hyperinflation, but more accurately described is a substantial or total collapse in the purchasing power of contemporary currencies.

We now turn our attention to the error of the state determining individual productivity, which apart from climate change and supposedly temporary logistical foul-ups was a focus for government policy at this week’s G20 meeting of finance ministers and central bank governors in Washington.

As shown above, the term stagflation was originally only applied to a condition whereby wages rise unsupported by output. Other than the cost of labour, prices were not even mentioned. Today, we see that in a wider inflationary context, similar conditions do exist for the original definition of the word. Labour costs are inflating in all jurisdictions while output appears to be stagnating. As mentioned in the introduction, Boris & Co appear to be excusing it by claiming that the UK must transition from a low-wage, low-productivity economy to a higher wage more productive economy, the latter condition an indefinite prospect in the future. Doubtless, other national leaders are or will be making similar claims in their jurisdictions.

Every now and then, there’s a rash of commentary on national productivity. And for the British, poor productivity is a contemporary hangover of Brexit angst. The OECD, the Treasury, the Bank of England and Remainers are all claiming the average Brit’s productivity level is woefully inadequate and goes to show how much they need the certain comfort of being in the EU.