The Netflix series “Squid Game” is about poor people taking part in horrific games while elite “VIPs” watch the show for entertainment. Through messages and symbolism, “Squid Game” reveals what is truly about: The incurable sickness of the elite.

If you enjoy watching people getting killed execution-style, boy do I have the Netflix series for you. It’s called Squid Game and it also features a bunch of people falling from high platforms and splattering onto the ground. Indeed, you will witness so many brutal deaths in Squid Game that you won’t have a choice but to become desensitized to them. Even the characters in the series end up having whole conversations about their childhood or something while others are getting shot in the face about ten feet away from them. They don’t care anymore. And you won’t either. And that’s kind of the point.

Despite the fact that Squid Game features extreme levels of gore and violence, the marketing surrounding it seems insidiously conceived to be appealing to children.

This is one of the images one can come across while browsing Netflix. Children could easily mistake this thing for a children’s movie and there is nothing preventing them from watching it.

The main villain looks like he’s straight out of an episode of the Mighty Morphin Power Rangers. His workers look like buttons on a Playstation controller.

In short, everything is there to lure children to the series to then traumatize them with scenes of rare violence and psychopathic mind games. 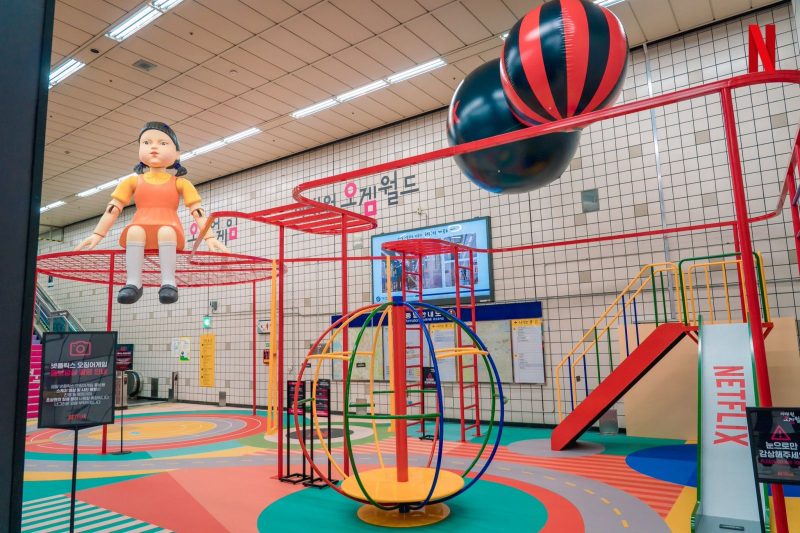 A Squid Game-themed playground in a shopping mall in South Korea. In the series, the playground is where dozens of poor people get killed by soldiers, all for the elite’s entertainment. Today’s pop culture is sick.

At the core of Squid Game is the age-old and undying “legends” of rich elite people recruiting peasants to take part in deadly games for their entertainment. The 1924 short story The Most Dangerous Game is about a Russian aristocrat who captures people, releases them in the wilderness, and hunts them for sport; The 1994 movie Surviving the Game is about a homeless guy who gets offered a “job” only to end up in a remote location to become prey in a hunting game played by rich and powerful people. More recently, the Hunger Games trilogy is all about poor people killing each other under the watchful eyes of the elite.

Many legends are based on true stories. And there’s something about these “elite games” stories that ring true. Squid Game took this age-old concept, added today’s society flirtation with high tech dystopia, and mixed in a whole lot of occult elite insanity. The result appears to have struck a nerve because Squid Game is on its way to becoming the biggest Netflix series in history.

But, like most Netflix series, the messages in Squid Game are twisted. It is about the culture of death that obsesses the elite and making the viewers a part of it. And, through subtle symbolism, the philosophy of the elite is there for you to witness.

Here’s a look at the messages and the symbolism in this series.

The series is about heavily indebted people who get recruited to play a “game” where the winner gets a massive cash prize. The losers die. We eventually learn that this entire ordeal was orchestrated by a group of rich elite people who enjoy watching miserable peasants being humiliated, infantilized, and forced to become immoral animals in order to survive.

The core theme of this series is aptly summed up during the very first seconds of the first episode.

The introduction of the series shows an overhead view of children playing Squid Game.

Appropriately enough, the narrator explains that the children who play Squid Game must make their way to the upper circle to win. When that happens, the narrator says:

“And, in that moment, I felt as if I owned the entire world.”

“Owned the entire world” … like the elite represented by that upper circle.

At the beginning of the series, the main protagonist named (Gi-hun) is clearly in the lower circle of society. He steals money from his mother and runs away from the shady people to whom he owes money.

Then, Gi-hun gets his first taste of elite sickness. While waiting for the subway, Gi-hun is approached by a mysterious salesman who happens to know everything about him. He proposes Gi-hun to play a game where he can win money.

When Gi-hun finally wins a round, he can’t wait to slap the guy right back in the face. However, stops him and shows him the money.

For a moment, Gi-hun did not care about the money, he got caught up in the sadistic thrills of the elite. This scene foreshadows what will happen to Gi-hun in the end. After this humiliating game, the salesman proposes Gi-hun to participate in another game that promises much more money.

After accepting the offer, Gi-hun is picked up by a car and is gassed to sleep. He wakes up in a dystopian nightmare.

The games take place in a massive compound hidden on a remote island. In many ways, this place resembles an MKULTRA black site where sick experiments take place. And the dystopian system that takes place inside these walls is a microcosm to our modern society.

Players are reduced to a number and are constantly monitored.

The workers who enforce the rules are also tightly monitored.

The players of the game are stripped of all possessions, dignity and are infantilized to a ridiculous degree. These players represent how the elite perceives the masses.