And my 2 cents about the high “failure rates” of new businesses, being a small-business owner myself.

New business formations, based on applications for an Employer Identification Number (EIN) with the IRS, exploded in June and July last year, then zigzagged up and down, and then this year exploded again and remained far above the historical range. 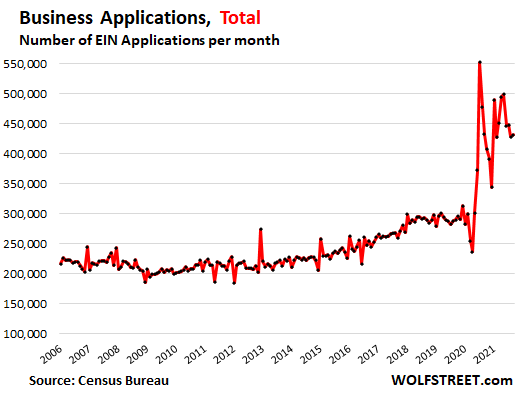 The historic high level of new business formations every month is part of the bizarre puzzle that this economy has become: The strange phenomenon of labor shortages, the enormous stimulus payments that went out, the federal unemployment payments that are now ending, the $800 billion in forgivable PPP loans that went to just about everyone last year and earlier this year, the 3.2 million people who still haven’t returned to the labor force….

Last year and earlier this year, there were suspicions that EIN applications were spiking because fraudsters were creating businesses to get their hands on these forgivable PPP loans. But an EIN wasn’t required for PPP loans. Businesses had to have been around for a while to qualify. And the PPP ended in May. Yet business applications have continued to be sky-high every month since then.

The Census Bureau removed from these EIN numbers those applications that were unrelated to typical business formations, such as for tax liens, estates, trusts, etc.

Most new businesses will create a job for the owner and maybe for a few other people and never become large employers. It can be very exciting and rewarding on many levels to own and run a small business. My WOLF STREET media mogul empire is one of them. Those types of small businesses pay other businesses or people on a contract basis, from accounting to IT work. But they don’t add many employees.

Using the information in the EIN application, the Census Bureau categorizes businesses with a high likelihood of creating a significant payroll as “High-Propensity of Planned Wages” business applications (HBA).

In September, there were 145,628 EIN applications by businesses that the Census Bureau deemed to be HBAs, up 31% from September 2019. In the first nine months of this year, there were 1.40 million of these business applications, up 41% from the same period in 2019: 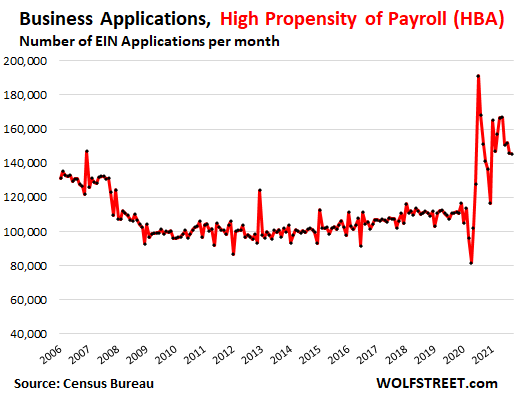 Within the HBAs, there are the “Business Applications with Planned Wages” (WBA) by businesses that have a planned date for their first payroll. They have funding, and they’re ready to pay wages. They’re most likely to grow their payroll and become significant employers.

But they remain down by over 35% from before the Financial Crisis: 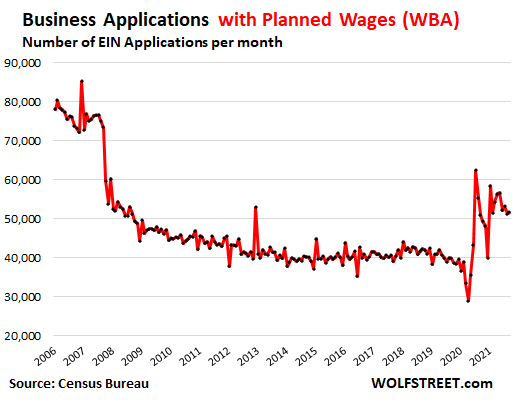 So how many new businesses with a low propensity to create jobs? 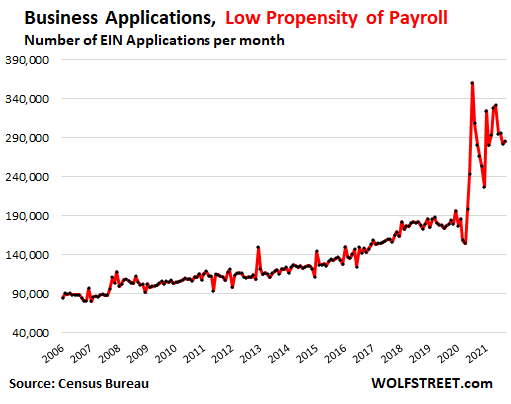 The huge number of these largely one-man shows and one-woman shows delineate a big shift in American society, with ever more people striking out on their own.

Much of that was made possible by the Internet which allowed these entrepreneurs to gain visibility, promote their goods and services, use convenient third-party platforms such as eBay and Amazon, and payment platforms such as PayPal and now many others, and engage in direct relationships with potential customers.

This was already a big trend when the pandemic hit with the flood of cash it unleashed that provided funding to strike out on their own, especially people who got laid off by their employer. 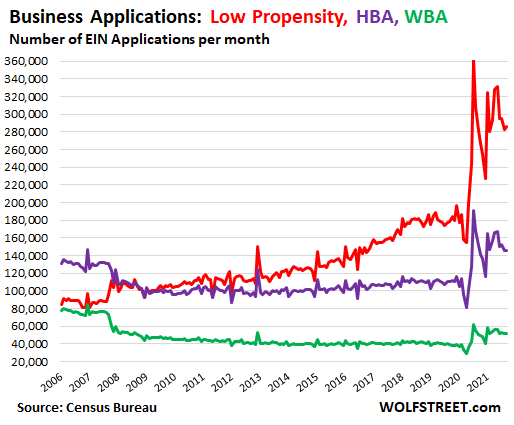 Retail is the biggie, thanks to the Internet and shift to ecommerce. When people think ecommerce, they think Amazon and other giants. But ecommerce has attracted millions of entrepreneurs, working out of their garages, condos, or farms, selling merchandise to customers around the country.

Even as brick-and-mortar retailers and malls have gotten battered, ecommerce entrepreneurs jumped into the game by the millions. And the pandemic accelerated that process.