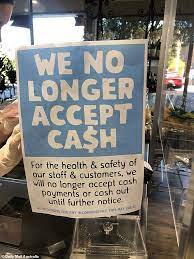 They laughed at him in 1991 when he pronounced himself a son of the Godhead. They were still laughing in 1995 when he wrote those words. Will they still be laughing when the corrupt Biden Administration introduces the digital dollar, when no one uses or is allowed to use cash anymore, when the IRS in the USA or the equivalent of whatever country you live in monitors your every transaction over six hundred dollars? When your money supply can be cut off in an instant on the whim of some faceless bureaucrat? And that’s before we mention hacking.

In June this year, a columnist for the Guardian reported that only one in six payments was now made in cash; Rupert Jones didn’t seem particularly bothered, but two years ago an ACLU blogger saw things very differently. Ignore his virtue signalling about “people of color”, neither billionairess Oprah Winfrey nor apparatchik Joy Reid will be the slightest bit bothered if the elites succeed in their goal for total world domination by effecting this essential plank. And it isn’t only the elites who want to enslave us; listen to this idiot; his short video has been viewed on YouTube less than a hundred times in five years. Cash is the currency of criminals, he says. All criminals bar one – the state.