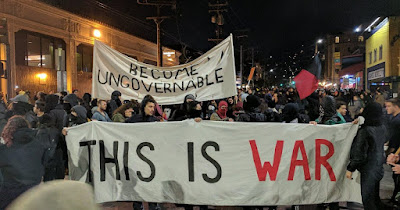 We have seen and discussed the headlines warning of the “upcoming” second American civil war, and other similarly themed headlines, but what those ignore completely is that blood has already spilled, and some city streets often look like warzones with the “rebels” (terminology when we see the same thing in other countries), controlling the streets without interference from the law enforcement.

Brother against brother, family against family, cutting ties with friends and family because they have a different political ideology, riots in the streets, verbal and physical attacks against strangers because they are on the “other” side of an issue.

Those are just a few of the stories and in many cases the images and videos we have seeing with increasing frequency, as we watch the “war” between opposing groups of Americans.

Literally, the definition of “civil war.”

Merriam Webster – Civil War: “a war between opposing groups of citizens of the same country.”

IT IS A WAR

For years, many warned that the growing hostility between Democrats and Republicans, liberals and conservatives,  was “leading” to a second civil war in America,.

Many, living in denial, still claim civil war is coming, yet looking around the country today, it seems as if that ship sailed long ago.

The media treats the BLM and Antifa riots, far more sympathetically than they do conservative “protests,” without the arson, looting, destruction of businesses, injuries and attacks against law enforcement.

The weapons are different, the “uniforms” are different, but the “cultures” and ideological and political beliefs of one group as opposed to the other, is causing violence, knife and fist fights, shootings, and complete lawlessness in certain cities and states.
How can anyone look around at what is happening from one coast to the other and not see it is a war already?

It isn’t coming, we are not on the “verge” or the “brink” of civil war in America, we are in the midst of it, fighting it on multiple fronts, political, culturally, ideologically and with increasing frequency, physically.

THE DIFFERENCE BETWEEN THE FIRST AND THE SECOND CIVIL WAR

I had this whole category practically written in my head, but a piece with the dreaded “‘Headed’ to a second civil war” headline, actually describes the differences between the first and the second civil war, in the perfect manner, so despite the headline, we will use their succinct and spot on assessment from July 2021.

This new Civil War is not about the Southern states secession from the Republic. Rather this new Civil War is about those who want to fundamentally transform America. It’s between those who embrace liberty against those who are hell bent on imposing a tyrannical government upon American citizens.
It is in essence a battle between patriots and tyrants.
One group of Americans, the patriots, believe that the United States is a Constitutional Republic where the power lies in the hands of each legal citizen not government. Patriots put their trust in God, not government, for their redemption. This group embraces free and fair elections, the imperative that only legal citizens of the U.S. have a right to vote and want voter IDs to identify themselves, and others, as legal voters.
The second group, the tyrants, believe that the United States is a democracy where 51% of the voters can dictate to the other 49% how to live, work and play. This group is willing to allow illegal non-citizens and dead people to vote. This group calls any voter ID laws racist. This group has no problem allowing elections to be stolen. This group believes that God is the opiate of the people and that government, not God, is in control.

Liberals and conservatives can argue all day long on who is the tyrant and who is the patriot, but a look at some of the “positions” of one group compared to the other, says more than any assertion could.

Examples include those that believe they have to right to tell others what to wear, what to say, how to say it, and what to do. The “other group” wants to be left alone to do, say, think and believe what they want.

Highlighting the difference, look at what group will chase others around business establishments screaming, yelling and harassing them for not wearing masks.

Anyone that thinks that “man” is a conservative needs their mental state checked. (Note – We have shown this video on ASNP before, but it worth seeing again or for those that haven’t seen it, to prove the truth of assertions about crazed and radical liberals.)