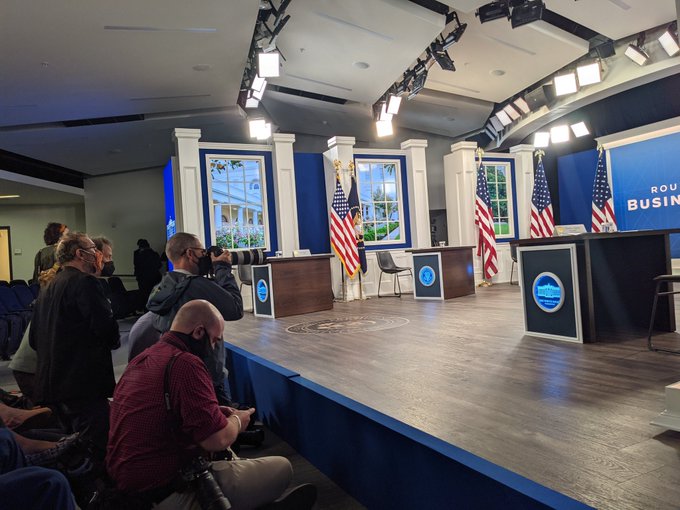 …Vice President Kamala Harris is earning jeers of her own for using child actors in a recent NASA YouTube video about space exploration.

Filmed in August while the Taliban was rapidly taking over Afghanistan and closing in on Kabul (and right before the Biden-Harris administration murdered a family of innocent civilians, including seven children), the “Get Curious with Vice President Harris” was tweeted by the VP’s account on October 7 to celebrate World Space Week.

Why does Joe Biden feel the need to use a Fake White House set across the street from the actual White House? pic.twitter.com/5p7TLwoPmw

And it’s a cringe-fest…

The video portrayed the children as regular kids – however it has been revealed that they were all paid actors who auditioned for the part by submitting a monologue and questions they would ask a world leader, according to the Daily Mail, which notes that the Washington Examiner revealed the production company; ‘Sinking Ship Entertainment’ out of Canada.

Monterey resident Trevor Bernardino, 13, told KSBW he was stunned when he learned he would be traveling to Washington, DC to take part in the video.

‘Then after that, like a week later my agent called me and was like ‘Hey Trevor you booked it,’ he told the network.

Trevor was one of five teens who participated in the video for the YouTube original series. He was joined by Derrick Brooks II, another child actor, Emily Kim, likewise a child actor, Zhoriel Tapo, a child actor and aspiring journalist who has interviewed former First Lady Michelle Obama, and Sydney Schmooke.

The video was shot at the Naval Observatory, Harris’ residence, from August 11 to August 13. During that time the Taliban were making rapid advances across Afghanistan and were closing in on Kabul during the chaotic U.S. withdrawal. -Daily Mail

So – the sitting US president is broadcasting from a fake White House, and his Vice President used a foreign production company and child actors for a NASA promo instead of tackling the border crisis.

The video was mocked by Fox News‘ Tucker Carlson, who called it ‘fake’ and ‘fraudulent.’

“So for humanitarian reasons we are not going to play that’ll video, but it’s online,” said Carlson. “If you dare, look it up, watch it. Watch it again, watch your own soul die as you do. It’s the fakest thing that’s ever been caught on video but in fact it’s even faker than it looks.”