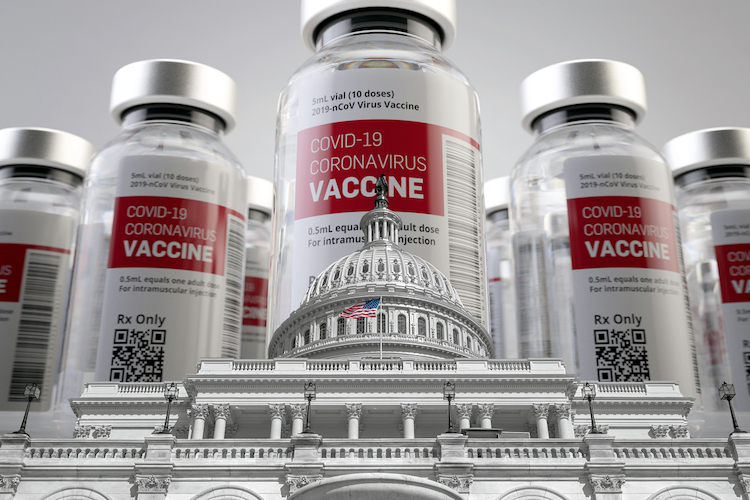 “Where, after all, do universal human rights begin? In small places, close to home — so close and so small that they cannot be seen on any maps of the world. Yet they are the world of the individual person; the neighborhood he lives in; the school or college he attends; the factory, farm, or office where he works. Such are the places where every man, woman, and child seeks equal justice, equal opportunity, equal dignity without discrimination. Unless these rights have meaning there, they have little meaning anywhere. Without concerted citizen action to uphold them close to home, we shall look in vain for progress in the larger world.”  — Eleanor Roosevelt

Those who have questioned the intentions behind government policy in response to the pandemic continue to observe the unreasonable intensity of supporters of mandated protocols. Declaring vehement loyalty to vaccine therapy, their minds are closed to any further input.

Vaccination proponents don’t want to see or hear anything contradicting their very confident, though most questionable position: that a benevolent government, supported by a monolithic, knowledgeable, scientific community, is successfully dealing with the crisis.

In addition to the challenges of an uncompromising public debate, some of us face a personal crisis: The compassionate principles of long-term relationships are being tested.

With entrenched devotion to vaccines, loved ones and friends who were once willing to discuss most other topics, refuse to engage. At a minimum, they express disappointment in our lack of understanding and compliance. When forthright they confess their judgment — our unwillingness to conform causes continuing affliction.

Many people have been persuaded that anyone who has doubts about the infallible words and irrefutable facts presented by somber leaders and an impartial press corps are infecting others with dangerous information.

Failures of the pandemic response are increasingly laid at the feet of the unvaccinated.

However, the furious indignation is often irrational, inordinate and out of character, suggesting it is driven by a set of external stimuli designed to create the response.

A looming crisis, initially presented with expectations of horrific consequences including widespread severe disease and millions dead, can be viewed as the beginning of a prescribed government response to the pandemic.

The intentional amplification of the threat, unjustifiable by any scientific defense, was never diminished, even as ominous predictions of suffering and mortality proved to be greatly exaggerated.

From the moment vaccines were released, anyone who doubted their importance and efficacy has been depicted as a hostile deviant entranced by fantasies or blindly following aberrant leaders.

And although so-called anti-vaxxers are belittled for their ignorance, there is no indication those rejecting enforced protocols are doing anything but defending their inalienable rights — life, liberty and the pursuit of happiness.

The extreme aggressive tactics of the government and media to promote vaccines — including a campaign to humiliate those who refuse to comply — have the earmarks of psychological warfare, with manipulation of citizens on a grander scale than any effort in recent history.

The continuing prevailing mindset of many people appears to be the reaction to a calculated induction of a mass hypnotic trance.

Of all aspects of pandemic response, this is one of the most troubling, and should cause us to consider its probability, provenance and rectification.

‘My honor is my loyalty’

The government’s use of a psychological operation — aka PSYOP — to promote immunization follows standards and practices for engendering a cult mentality to reach its objectives.

The central technique for initiating and maintaining an obedient population is developing an “us versus them” mindset. The demonization of outsiders is essential.

Demands and sacrifices are made of the members, solidifying their involvement and ensuring they see themselves as superior to those who don’t participate.

These mesmeric psychological operations can be identified in groups small and large, including mass populations.

The most dramatic example of a PSYOP engendering a cult is the rise of fascism in Nazi Germany. An elite propaganda machine entranced a nation into believing they were a superior race, arousing a blind loyalty to their cause, with a loss of moral parameters unmatched in modern history.

Hitler’s most loyal troops, the SS, closely associated with forced labor and death camps, and deemed a criminal organization by the Nuremberg tribunals, wore belt buckles and kept daggers engraved with the words, “my honor is loyalty.”

More recently, less-militarized cults have made some dramatic impact in the United States.

The religious organization, the People’s Temple, in its early days gained the support of politicians and manipulated the media to project a positive spin on its activities.

The People’s Temple devolved into darkness, eventually leading to a quintessential cult event in Jonestown, Guyana. On the cusp of being arrested for the murder of a visiting congressman, their leader, Jim Jones, demanded the highest level of loyalty: Hundreds of members committed mass suicide, including their children, by drinking a cyanide-valium cocktail.

Mass hypnosis allows transference of an individual’s attention and priorities to a singular objective or ideology, and loyalty to the cause is elevated, overshadowing self-preservation.

Another example of an influential cult based in the United States is the Unification Church. Their members, the Moonies, were staunchly loyal to Sun Myung Moon, who was famous for presiding over spectacular mass weddings of arranged marriages.

As a lead investigator in a BBC biography of the Korean Cult leader, I met and interviewed former devotees and abettors who described the process of indoctrination into a trance of blind obedience.

Moon created a sophisticated psychological framework to attract and retain members, claiming he was a messiah greater than Buddha, Jesus and Mohammed combined. Good-hearted, intelligent people succumbed to a psychotic euphoria invoked by Moon and his agents, with support from government and media.

Only later did they awaken to their profound mistake, falling for rhetoric they eventually recognized as hypnotic, deeply flawed and dangerous.

One of the interviewees spoke most eloquently about having lost his soul, and given away years of his life.

An individual whose attitude embraces the affirmation — “my honor is loyalty” — towards any leader, cult or policy, has given up his or her personal power, often to abusive forces.

Symbolically, the SS motto has been illegal to use in Germany since 1947.

Cults are often viewed as aberrations that occurred in the past, however, they continue to thrive.

The susceptibility of humans to mass hypnosis and manipulation continues to be exploited and has never been applied for the greater good.

Cult of the vaccinated

Those who resist vaccination are reacting to harsh directives and overt hostility from a heavy-handed government. Their position is neither the result of mass hypnosis nor cult-like programming, rather an exercise in freedom of speech and choice.

Psychologically, there is an indisputable, definitive metric that demonstrates the difference between the anti- and pro-vaccine groups.

A large majority of the unvaccinated have reviewed information and statistics from a range of sources, that either support or contradict government policy. They have made choices based on concerns about efficacy and risks, but are open to engaging in debate.

Most of the pro-vaccine faction stand by what they deem unassailable information from the news media. They are willing to accept a filtered version of data, and staunchly refuse to look at any material that might cause doubt about their decisions or challenge authoritative mandates.

They refuse to engage in debate.

A majority of the general public has been beguiled into feeling threatened by the virus, and roused to angrily denounce those who doubt the efficacy or risks of COVID-19 inoculants.

Designing a PSYOP for a pandemic

A strong circumstantial case can be made that there is an imposed PSYOP in place in the United States. The vehement public support and willingness to obey without question are the precise results a government would seek in response to the perceived threat of a deadly pandemic.