Industrial production over the long term is a sad sight, powered by offshoring.

Industrial production – manufacturing output, oil-and-gas extraction, mining, and gas and electric utilities – fell 1.3% in September from August, pushed down by production of motor vehicles and parts, which plunged 7.2% for the month, and by oil and gas extraction, which fell 3.8%.

Manufacturing of motor vehicles and parts has been hobbled all year by supply semiconductor shortages that have led to rotating shutdowns of parts manufacturing operations and assembly plants. The shortages continued to get worse – despite assurances earlier this year that they would be over with by Q4.

The manufacturing production index for motor vehicles and parts, adjusted for inflation, dropped to a value of 85.4. Beyond the collapse of production during the lockdown, it was the lowest output value since 2013 and was back where it had been in 2006: 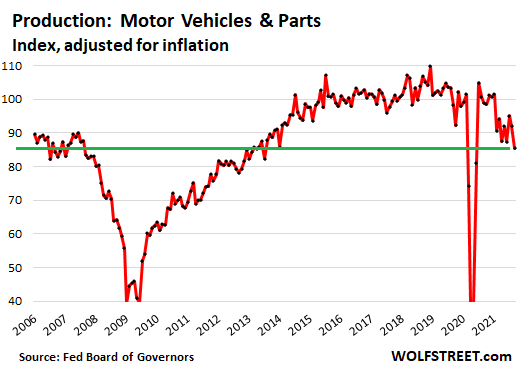 Motor vehicle and parts manufacturing started hitting new highs in 2014 on an annual basis and continued to grow and peaked in 2018, before dipping in 2019 and plunging in 2020. This year promises to be rough too.

In an effort to keep their plants running, automakers have built large numbers of nearly finished vehicles that are missing a part of two and were put on storage lots until those parts arrive. Then the finished vehicles are shipped to dealers. In Q3, GM shipped over 68,000 of those vehicles to dealers.

Production of these unfinished vehicles sent into storage is included in these production figures. But they cannot be sold until they’re finished, and sales in September of new vehicles have continued their supply-driven multi-month plunge:

Oil and gas extraction dropped 3.8% in September from August, and was down 0.7% year-over-year, as producers along the Gulf Coast got slammed by Hurricane Ida, which raged from late August to early September, and shut down production temporarily.

The shale oil and gas industry bloodied and wiped out investors after hundreds of bankruptcies and debt restructurings during the oil bust from 2015 through 2020, following years when the only thing that mattered were production increases, no matter what the losses. This relentless surge in production caused oil and gas prices to collapse, and companies with them.

What’s left of the industry has tightened up, as burned investors have gotten careful, and the flood of money into the industry has slowed. Production has slowed too, as the highly fragmented shale oil-and-gas industry is now focused on keeping production down to levels that allow prices of oil and gas to rise. And they have risen big time.