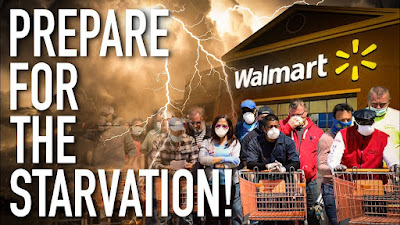 In May of 2019, there were a few stories that erupted about a coming food shortage, a Catastrophic Food Shortage.  What we were working ourselves into was obvious even two plus years ago.  Off The Grid News had one that was typical of the breed when their headline stated “Is A Catastrophic Food Shortage Coming To America And The World?” where they blamed that idea on worldwide destructive weather patterns.

Meanwhile, Missouri farmers lost 850,000 bushels of corn in the collapse of one bin in March. Moreover, floods are destroying $400 million worth of livestock and $440 million worth of crops in Nebraska” they gave as examples, and warned that “Under these circumstances, people who want to eat will need to grow and stockpile their own food.”

Last year was no different, with even ABC News flying that same theme “The head of the U.N. food agency warned Tuesday that, as the world is dealing with the coronavirus pandemic, it is also “on the brink of a hunger pandemic” that could lead to “multiple famines of biblical proportions” within a few months if immediate action isn’t taken.”   It should be obvious that the UN is just pushing the Climate Change farce although the weather is indeed changing as that is the very definition of “weather”.  What caught my eye was the phrase “on the brink of a hunger pandemic” which seems like some sort of warning to us all.

That drought condition has not changed as much as it has moved around a bit with this summer’s Discover Magazine saying that “By one measure, almost 100 percent of the West is now in drought. And that sets an all-time 122-year record, according to David Simeral, a climatologist at the Desert Research Institute and the Western Regional Climate Center” using the Palmer Drought Index.  “Using another measure, the kind you may be accustomed to with the standard U.S. Drought Monitor, about 90 percent of the West is experiencing some level of drought, with 57 percent in extreme to exceptional drought, the two worst categories…..So however you want to look at it, what’s happening in the Western United States right now is truly historic, and the word “crisis” really is no exaggeration….Western farmers and ranchers are facing a brutal growing season as drought conditions drastically reduce water deliveries”   I witnessed that first hand living in the Great Basin where some reservoirs have gone dry with no water going to the towns they serve. The forecasts for this winter show likely colder than normal in the North and Northeast due to weaker El Nina, and continuing drought in the Southwest states.

Although that is bad enough and it is likely affected by weather control mechanisms, see ANP “The Great Unraveling Has Arrived: Nightmare That Never Ends For Agriculture Industry Leading To Devastating Food Shortages” by Stefan Stanford and “These Weather Headlines Are NOT Normal! We All Know Of HAARP, But Be Forewarned Of  S.A.T.A.N. And All Of The Other Sinister Weather Modification Systems Out There!” by yours truly for more info on ‘Weather Warfare” and how the government, or more correctly, the PTB, the world wide secret societies that are determined to end this system and instigate total world dictatorship per the Illuminati protocols espoused many times here and elsewhere.

The Ice Age Farmer a few months ago talked about Water Wars and said “the state is simply turning off the water to farms & ranches, depriving them of water needed to grow food and raise animals. This will create food shortages by design, in order to then point at the massive problem and declare, “It’s global warming! We NEED climate lockdowns! We MUST move to absolute zero carbon emissions! We HAVE to take away private ownership of cars! You HAVE to eat fake meat and move to post-animal economy!” The story is the same across the nation, and indeed the world. But who is behind these WATER WARS?”   Raising fears of the Globalists promise to destroy our water supplies and starve us to death – at least those that do not die of the Kill Shot first.  You can watch the explanation of this scenario in the first video at the bottom of this article titled “Water Wars – Manufactured Drought to cause Food Shortages”