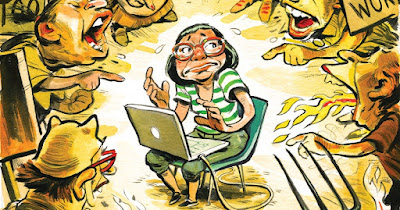 Social Justice Warriors (SJW) – We have all seen them, the grown adults that will stomp their feet and scream at strangers not conforming to their ways.

The men and women harassing and verbally abusing strangers for not wearing a mask when their liberal puppet masters demand everyone do so.

The mobs stalking politicians of their own party into a bathroom, filming, because they do not “vote” on an issue in a manner the crazed stalkers want.

The racist BLM members that go door to door in their own neighborhood literally screaming and screeching while calling her white neighbors racist because “Black Lives Matter.” (Video of that will be shown below)

The rioters that think nothing of burning down buildings, looking and attacking random strangers and law enforcement, all in the name of “justice.”

Those “triggered” by hearing any opinion that does match their own ideology.

The list goes on and on and on, the so-called Social Justice Warriors (SWJ) that were either raised to be little terrorists, or indoctrinated by socialist and communist teachers within the educational system.

Below are some examples of what liberal parents are breeding and raising.

The first example below is most definitely one of those young men who were raised by a flaming liberal, which we know without a doubt because where did she turn for “advice?”

Slate, one of the most leftist and radical liberal websites online, as she complained that she found a “Creepy List On My Son’s Laptop.”

The list described is the result of parental liberalism and teaching their children they are entitled to be the arbiter of right and wrong.

My son, “Jack,” 14, has been maintaining a spreadsheet that tracks all of his classmate’s problematic actions. Jack has always had difficulty fitting in, but he is a compassionate and intelligent boy. We do not allow our children to have their own computers to prevent the risk of them being radicalized by alt-right websites, so our kids share a laptop that we monitor and control access to. We found an excel spreadsheet in Jack’s folder that listed the names of all of his classmates, as well as dates and descriptions of their problematic behavior. Some of the descriptions I saw include “has a mom who is a cop,” “no pronouns in insta bio,” “laughed at a fat joke,” “lists problematic show as one of their favorites,” “mimicked a foreign accent,” and “used cis-normative language.”

While I am pleased to see Jack taking an interest in his peers, I get a weird feeling about his spreadsheet. As much as I don’t condone the behaviors mentioned, it seems a bit creepy for him to be monitoring his classmates. I also wonder what he is trying to do with the document. Another concern is that we are white and some of the kids on the list are Black. Given the long history of white people policing Black existence, I question whether Jack is the right person to be taking on this task and whether it would be more appropriate coming from a BIPOC person.

We have asked Jack about the spreadsheet and he denies involvement, but we know that it couldn’t be anyone else. Am I right to be concerned about Jack’s list? I don’t know that it is the best way for him to engage with his peers and promote social justice. On the other hand, I am proud of how committed he is to this cause and I don’t want to stop him from bearing witness to injustices within his own community.

Heh. That list and she is worried about him being “radicalized by alt-right websites?” Sounds like the teen has created a “hit list,” and is already radicalized by his very own parents, to the point that he has become something even his parents find “creepy.”

The parents also don’t seem to have a issue with describing the behaviors their son considered “problematic,” like he has been trained to set himself up as the decider of what is and what isn’t problematic.

Correct me if you think my interpretation is wrong, but it sounds like her problem isn’t really about the “list” but about her son maybe being seen as “racist,” because he included black kids and he is not black.

Another point to highlight is the fact that the parent controls all information “Jack” can see and access on the laptop, and by hiding anything the parents deem “problematic,” they have turned their child into someone that literally has a “list” of those he disagrees with, with names, dates and behaviors.

I do agree with the parent on one issue…. the list is creepy, the kid sounds mega-creepy and the parents, from reading the letter to Slate, are raising the 14 year-old to be that creepy, hence, the “creepy” factor stems from the parents themselves.

We have half a nation of these types of parents, all breeding and raising insane SJW children, so they become insane SJW adults.