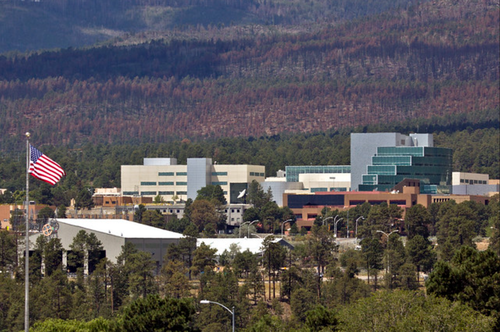 A last Friday deadline for Los Alamos National Lab employees to get vaccinated has come and gone, with a judge on the same day denying a request by 114 employees there to block the nuclear lab’s vaccine mandate from taking effect.

In the last days the employees, including top nuclear engineers and scientists, have literally taken to the streets outside the lab, protesting the mandate which orders them to get their first dose of the Covid vaccine or face termination.

Concerning the lawsuit filed by the employees, The Hill wrote earlier that “Workers at the New Mexico laboratory, which created the atomic bomb, filed a lawsuit claiming that exemptions to the mandate have been denied without proper justification.”

Specifically the workers, among them dozens of scientists, are pushing back against federal contractor Triad National Security LLC, which runs the lab under contract of the US Department of Energy.

It’s unclear if any have been fired at this point after the deadline has passed, or if any level of negotiations or understandings are in the process of being reached. The reality is that these employees are seen as immensely valuable to both the advanced nuclear lab and national security, given their government-issued clearance levels.

Local media detailed Monday protests along the main road leading to the lab and outside the entrance as follows:

Some 55 protestors, many of them carrying U.S. flags or signs, gathered on State Route 4 in White Rock at 6 a.m. to get the attention of Los Alamos National Laboratory commuters and others, They were protesting LANL’s policy mandating COVID-19 vaccinations for all employees and the termination or placement in leave without pay status of an undisclosed number of employees by LANL last Friday.

As of Friday LANL officials said 96 percent of employees are fully-vaccinated and an additional 1 percent have had their first dose. Additional protests are being planned in other locations.

Importantly, it appears the bulk of those who face termination are not low-level staffers or new hires, but in many cases scientists and nuclear engineers who have worked at one of America’s most sensitive and advanced defense facilities for decades.

The Associated Press had detailed that “The plaintiffs include scientists, nuclear engineers, project managers, research technicians and others who have some of the highest security clearances in the nation for the work they do.”

Further the report underscored they would be “difficult to replace” in the short term. “Some of the employees who are part of the lawsuit have worked for Los Alamos lab for decades, while others are newer hires who have relocated to New Mexico from other states and countries,” the report added. “Thirty-four of them are named in the lawsuit and 80 have opted to remain anonymous, citing fears of retaliation.”