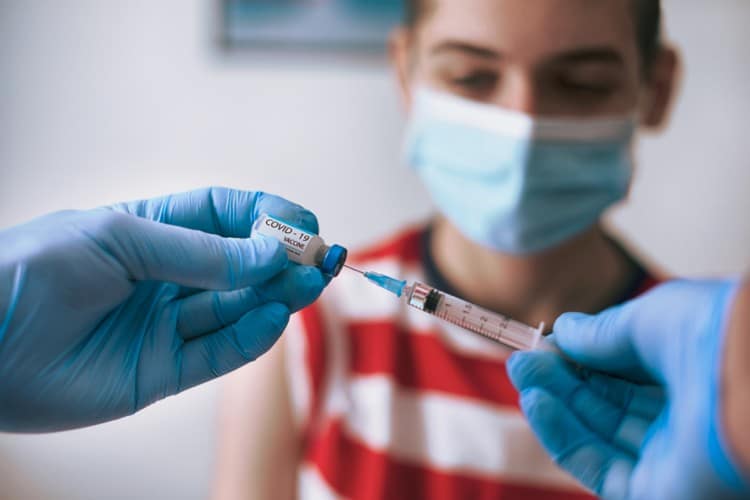 Perhaps it would be different were there a powerful Students Union that donated big bucks to politicians. But 12-year-olds generally don’t have deep pockets. This is why, in California, they’re now going to have to have something else, something not required of their teachers: COVID vaccinations as a requirement for entering school.

It’s an example of how laws are just for the littlest of the little people, too.

In fact, the mandate will apply to all students in 7th through 12th grades — but not the higher-COVID-risk-category adults instructing them. Never mind studies showing that the genetic-therapy-agents (GTAs, a.k.a. “vaccines”) are notably more dangerous to adolescents than is the coronavirus itself. (But science is now also perhaps just for the little people, while being selectively ignored by the bigwigs).

What’s more, California’s government also intends to mandate the GTAs for kindergarteners through sixth graders in the foreseeable future.

For this you can largely thank Democrat Governor Gavin Newsom, who’s perhaps emboldened after surviving a recall effort by a wide margin. The Daily Mail summarized the story Friday, writing:

In justifying the measure, Newsom stated, “We want to end this pandemic. We are all exhausted by it,” related the Mail. In reality, however, what’s caused the exhaustion has not been a “pandemic” — SARS-CoV-2 is now endemic — but the Establishment reaction to it. Moreover, it will likely never “end” because, since it is endemic, government will always have a pretext for imposing more Branch COVIDian measures “for our own good.”

Yet unlike our “exhausted” ones, some nations’ authorities are recognizing the China virus’s endemic status. Word is that Norway may soon reclassify the disease, with Geir Bukholm, Infection Control Director of the Norwegian Institute of Public Health (NIPH), saying, “We are now in a new phase where we must look at the coronavirus as one of several respiratory diseases [such as the flu] with seasonal variation.”

Of course, we do have vaccines for the flu, right? Sure — but no one ever suggested they’d “end” influenza. In fact, the CDC calculated that the 2017-18-season flu vaccine was only 40 percent effective. Explanation?

The strain of flu virus the vaccine is derived from won’t necessarily be the strain prevalent during peak respiratory disease season. If you’re wondering why health authorities didn’t “know” that it should be the same with the China virus — why figures such as Dr. Ezekiel Emanuel actually said we must stay locked down for 12 to 18 months until “Vaccine Day,” as if it would be V-E Day — consider the following:

“This viral class [SARS-CoV-2] is likely to mutate, and vaccines may need to be in constant development, as with the flu,” wrote Yale School of Public Health lecturer Dr. James Hamblin in his article “You’re Likely to Get the Coronavirus.”

That piece was published by the liberal Atlantic on February 24, 2020 — early in the “pandemic.”

So if “‘we’re putting all our hopes in a vaccine as being the answer, we’re in trouble,’ Jason Schwartz, an assistant professor at Yale School of Public Health who studies vaccine policy, told me,” Hamblin also related. “The best-case scenario, as Schwartz sees it, is the one in which this vaccine development happens far too late to make a difference for the current outbreak.” Uh-huh.

And informed and honest people told — even early last year.

So why are Newsom and other Branch COVIDians forcing GTAs on children? It’s not to protect the kids because they’re more likely to die from drowning or vehicular accidents than from COVID. It’s not to protect the teachers, as even CDC head Rochelle Walensky admitted that the GTAs don’t prevent China virus transmission or contraction; the real and only benefit, it’s now claimed, is that they lessen the disease’s severity. Yet if this is true, it’s the more vulnerable, not the least — the teachers and not the children — who should be “vaccinated.”

This is especially true given how studies show that the GTAs are notably more dangerous to kids than is COVID. There are numerous reports of juvenile GTA-related complications, including death. Thus did 93 Israeli doctors sign a letter earlier this year warning against giving kids the GTAs. “We believe that not even a handful of children should be endangered through mass vaccination against a disease not dangerous to them,” they wrote.